Daniel Ricciardo banged in the opening time of the session on a 1:32.932. Moments before that, Raikkonen spun at T2 after coming out of the pits.

Sebastian Vettel was the first of the big guns to post a quick one and he logged a 1:30.610 on the medium tyre. Leclerc quickly displaced him with a 1:30.203.

Bottas led the way following the opening attempts as he beat Leclerc’s time by 0.079s. Hamilton, Verstappen, Vettel and Gasly followed. 0.5s covered them before the qualifying sims began.

Sainz, Magnussen, Hulkenberg, Norris, Kvyat, Raikkonen and Albon were covered by only 0.4s in a very compact midfield duel.

The Ferraris went out earliest for the qualifying runs and Vettel popped in a 1:28.942, 0.141s in front of Charles Leclerc.

Mercedes came out and couldn’t respond to the pace from the Italian team. Hamilton and Bottas (aborted his first lap) slotted in 0.5s and 0.6s behind Vettel’s benchmark time.

Surprisingly, both Ferraris went for another run on brand new softs – and they improved. However, it wasn’t perfect.

Sebastian Vettel looked set to improve by quite a margin but ran wide in the final corner. He still managed to lower his own benchmark by just under a tenth with a 1:28.846. Leclerc got within 0.035s of his stablemates table-topping time.

Nico Hulkenberg put in a superb lap to end up 5th quickest in the Renault and the lead midfield runner. Max Verstappen was 6th, with team-mate Pierre Gasly a lowly 12th.

Both Alfa Romeos missed most of the session following water leaks on both cars. Raikkonen couldn’t get in a qualifying or race fun.

As well as that, Stroll got delayed in the pits as well as his mechanics checked the Canadian’s car in the early stages. Lando Norris was forced to box in the closing stages due to an issue during his race fun.

Sebastian Vettel went for a spin between turns 2 and 3 at the start of his race simulation – but he continued without any problems.

During the race simulations, the Ferraris, Red Bulls and Mercedes’ all lapped in the high 1:34’s and low to high 1:35’s on the soft and medium tyre, for the most part. Bottas did 17 laps on the softs, with Hamilton putting in 13 on the mediums. 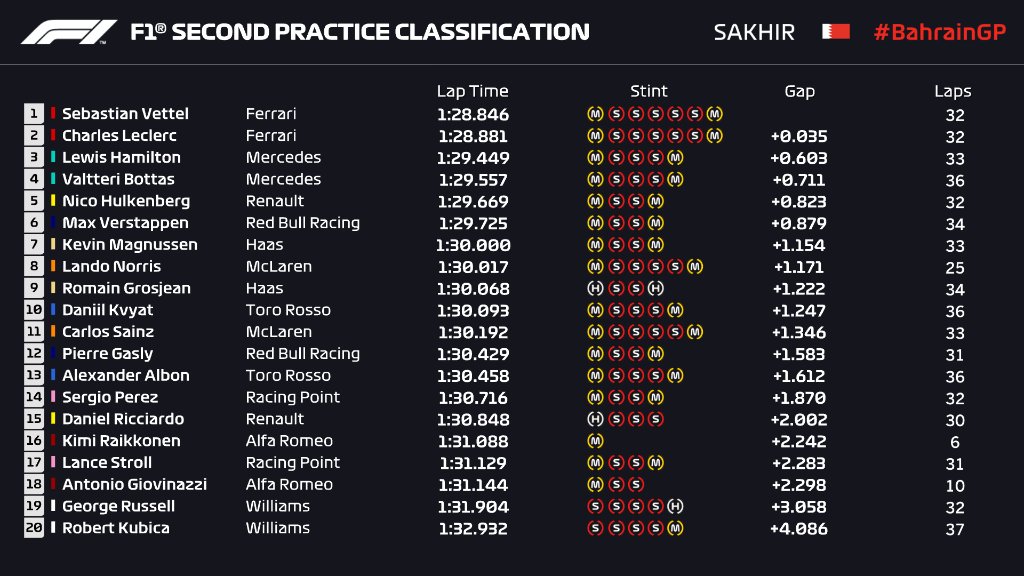 F1 | Horner on the budget cap: "The consequences to it could be catastrophic"