Off the line, Hamilton got the better start of the two Mercedes drivers – but after some close racing in the first couple of corners, Bottas managed to maintain the lead. Vettel stayed in P3 as Perez got ahead of Verstappen. Leclerc had a poor start on the mediums and dropped to 10th.

Leclerc then quickly dispensed of the midfield runners and Verstappen to find himself up in P4. He was the fastest driver on the track following his move on the Dutchman and his pace on the yellow tyre forced Mercedes and Vettel to pit. Bottas stayed in front of Hamilton and Vettel.

In the midfield, Raikkonen triggered a series of early stops as he pitted at the end of lap 7. It forced the others to pit. Perez led Norris, Sainz, Grosjean in the best of the rest battle at the halfway stage of the Grand Prix.

With Leclerc struggling for pace on his worn medium tyres in the latter stages of his first stint, it allowed the other main runners to catch him. Bottas, Hamilton and Vettel all overtook the Monegasque driver before he finally boxed on lap 34. He rejoined in P6 just behind Gasly; and a whopping 20s adrift of Verstappen.

Gasly’s race came to an unfortunate end on lap 38 as he pulled out of the race from P6 thanks to some reliability problems. The exact cause is not known yet. A VSC was deployed and only Norris decided to stop. He dropped from 7th to 8th, team-mate Sainz being the beneficiary.

Back down the field, Daniel Ricciardo – who was moving through the field quite nicely – tried an ambitious move on Daniil Kvyat for P10 heading down to T3. However, the Aussie locked up and went straight into the run-off area. He then reserved into Kvyat’s car as the Russian was forced to take avoiding action. Both drivers ultimately retired after that messy incident.

At the front, Hamilton put Bottas under big pressure in the closing stages. Yet, he couldn’t get close enough to have a lunge at the Finn.

In a largely quiet race, Valtteri Bottas took his fifth victory in F1 to reclaim the championship lead by a single point from team-mate Lewis Hamilton. Hamilton finished 2nd to seal a fourth straight one-two result for Mercedes in 2019. Sebastian Vettel completed the rostrum with a solid, quiet drive to 3rd.

Max Verstappen split the Ferraris once again to be 4th. Charles Leclerc ended up in P5 – and set the fastest lap of the race. Sergio Perez, Sainz, Norris, Stroll and Raikkonen completed the points scorers. 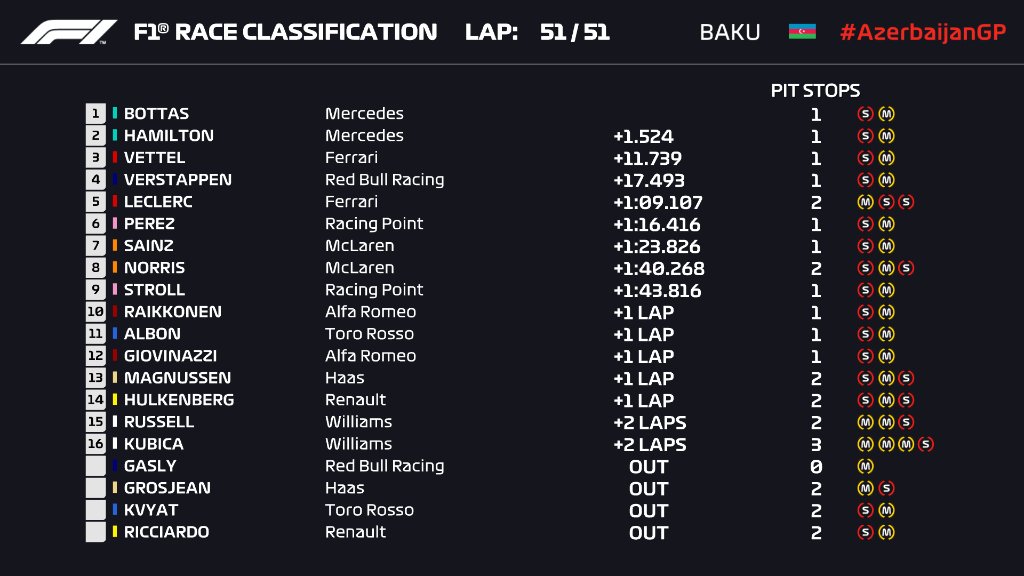 F1 | Emilia Romagna GP | Russell: Bottas “probably not in the wrong” for the Tamburello crash

F1 | Emilia Romagna GP | Seidl: Norris has ''made the next step as a driver''