Charles Leclerc posted the first representative lap with a 1:19.334 on the soft compound. Vettel beat that by 0.409s within seconds to take P1 from his team-mate. Both Ferraris improved to a low 1:18, Vettel less than a tenth in front of Leclerc. The German spun at the final chicane on his third flying lap, but no harm was done.

Valtteri Bottas brought out the red flags 20 minutes into the session after spinning at turn 5 and getting stuck in the gravel on cool tyres.

Bottas has beached his car at Turn 5

Lewis Hamilton fired in a superb 1:17.655 on the mediums to go 0.6s clear of the Ferraris. Verstappen, Gasly, Magnussen, Kvyat, Grosjean, Norris and Albon completed the top 10 with 20 minutes to go.

Bottas’ car was recovered to the pits and he immediately went quickest on a 1:17.291. Charles Leclerc quickly beat that by pumping in a 1:17.099 to take P1 from the Finn.

Just like on the first runs, Hamilton dominated and logged a 1:16.568 to end up fastest in FP3 by 0.531s. 0.093s covered Leclerc, Bottas, Vettel and Grosjean from P2 to P5. Magnussen, Verstappen, Albon, Raikkonen and Sainz rounded out the top 10.

The qualifying simulations were interrupted in the final few minutes as George Russell caused a second red flag of the session. Heading into turn 4, the young Brit lost the rear of the car and hit the barriers. Luckily, the car wasn’t badly damaged but he couldn’t get out of the gravel.

Barring a strange situation, Mercedes should take pole for qualifying this afternoon. 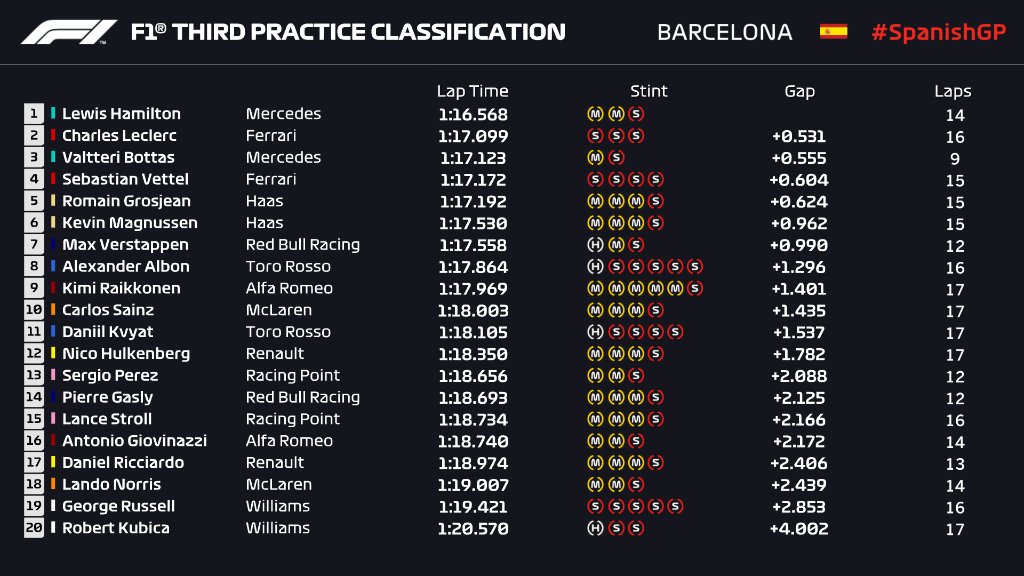