After missing FP2 yesterday, George Russell hit the track immediately and went to the top of the charts. He started with a 1:37.974 and ended up lowering his benchmark to a 1:31.810.

A shower early in the session meant the teams stayed in their garages for a good chunk of it. Bottas (+3.6s) and Kubica (+10.9s) posted times on the intermediates to go P2 and P3.

In the second half of the session, conditions were good enough for dries and Hamilton was the first of the big guns to go out and clocked a 1:28.988. Mercedes team-mate Bottas immediately beat that by 1.464s to go fastest of all. Charles Leclerc beat the Finn by a less than a tenth on his first flyer of the day.

After a lot of changes at the top as the track dried out completely, Lewis Hamilton logged a 1:26.338 to be quickest before the qualifying simulations at the end of FP3. Verstappen, Gasly, Leclerc, Vettel and Ricciardo followed. 0.627s covered the top 7. Norris, Sainz and Albon rounded out the top 10.

Leclerc was the first driver to break the 86s barrier by banging in a 1:25.905 in the Ferrari on his first attempt during the qualifying simulations. Vettel narrowly missed out on beating his team-mate by 0.026s as the Ferraris finished 1st and 2nd. Hamilton joined them in the 1:25.9s but missed out on top spot by 0.049s. 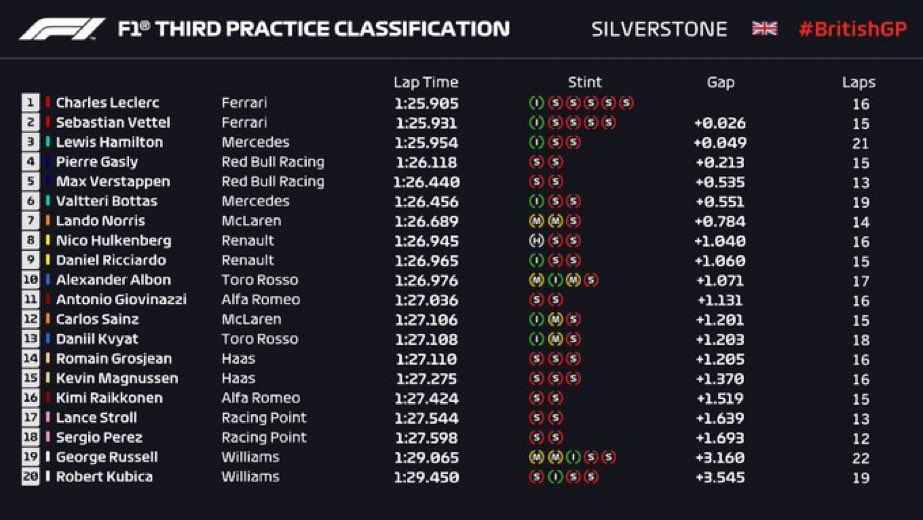