Antonio Giovinazzi logged the first time of qualifying with a 1:27.710 in his Alfa Romeo. The Italian quickly dropped to P10 as almost all the other midfield runners all put in a quicker time. Sainz’s 1:26.689 vaulted him to the top of the charts, less than a tenth ahead of Romain Grosjean.

However, Norris’ 1:26.079 would ultimately be the quickest lap from a midfield runner on the first attempts in Q1.

Grosjean, Stroll, Perez, Russell and Kubica were in the drop zone ahead of the final runs in the first segment of qualifying.

Grosjean put in a superb lap to move himself into the top 10 and safely book his place in Q2. Sergio Perez improved right at the death to make it through in P15 and knock Kevin Magnussen out by 0.013s. Only 1.249s covered the top 18 cars in a very tight session.

Magnussen, Kvyat, Stroll, Russell and Kubica were the casualties in Q1.

On the mediums, Valtteri Bottas banged in the opening time of Q2 with a 1:25.888. That was beaten seconds later by Hamilton – 0.048 the difference between the Mercedes’.

A 1:25.646 put Leclerc on top of the charts, in front of Bottas who improved on his second lap. Hamilton, Verstappen and Gasly followed, with all five drivers on the mediums. Ricciardo, Norris, Vettel (used softs), Sainz and Hulkenberg completed the top 10 ahead of the final flyers.

The bottom 5 was Albon, Perez, Giovinazzi, Raikkonen and Grosjean before the final attempts.

A flurry of late improvements shook the order up. The big surprise was Carlos Sainz dropping out in P13. Vettel’s late lap put him up to P5 on the softs. Leclerc also went on softs at the end and improved by a tenth up front. A great lap from Alexander Albon put him in Q3 by 0.116s.

Giovinazzi, Raikkonen, Sainz, Grosjean and Perez were knocked out in the middle segment of qualifying.

A big moment for Hamilton at Brooklands cost him a bundle of time on his opening attempt in Q3. The Brit clocked a 1:25.345 to go fastest – but Bottas instantly beat that by 0.252s. Verstappen, Leclerc, Gasly and Vettel came next. 0.694s covered the top 6.

First hot lap done and it's Bottas who leads!

Bottas failed to improve on his final run but clung on to pole by a mere 0.006s from Hamilton and 0.079s ahead of Leclerc in an incredibly close final segment of qualifying. Verstappen in P4 was only 0.183s off pole position. 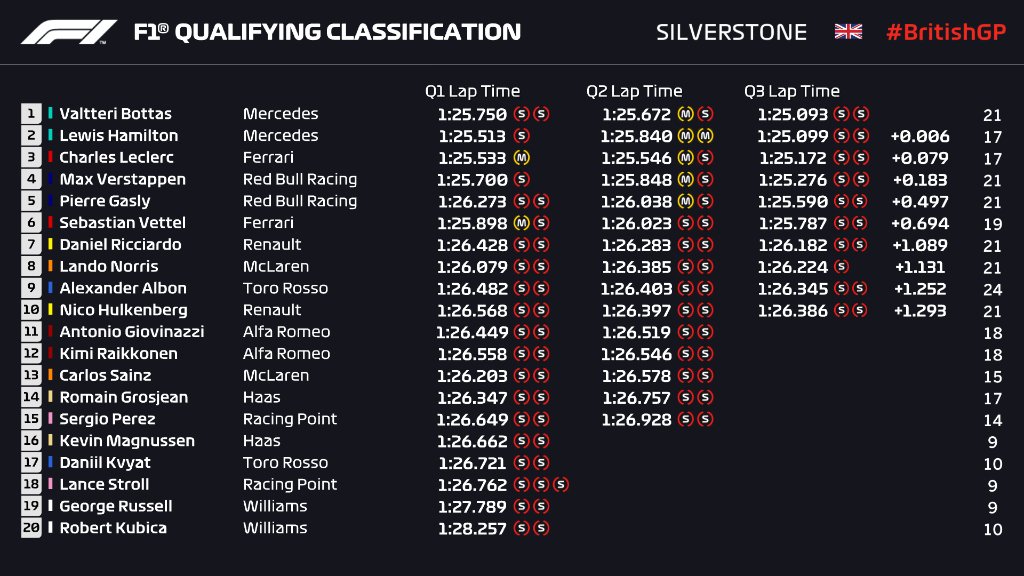 F1 | “Hamilton was not lucky”: how the halo saved Lewis Hamilton’s life

F1 | Alfa boss Vasseur on Zhou: ''I think every single team in F1 is looking after him''

F1 | Italian GP | Wolff divulges strict clauses in Albon’s contact with Williams that protect Mercedes but have also him out in the dark.