George Russell and Robert Kubica are the first drivers to tackle the circuit for the 18 minutes of the first elimination: unfortunately, sir Frank Williams will be spectator of the Polish engine burning right after Blanchimont turn within only the first 5’ of action gone; Eau Rouge-Radillon oil pickup difficulty from powertrains is named as one of the possible causes. Red flag as Lewis Hamilton was still outside the car waiting for the ultimate fixings after the FP3 crash in sector 3.

At the restart, the Briton joins the pack of all the cars on track. Verstappen claimed a problem just on the outlap: a strange sound is heard on his onboard; a few minutes later he could stroke the first slot. Again a 1-2 from Ferrari clear the few doubts left that Cavallino can bring home the first row. But at the very end of the session Giovinazzi is the second car to blow the PU after La Source hairpin: the red flag ends the journey of Gasly, Sainz, Kvyat and Russell.

With the clock tickling the 15 minutes time for putting a time for the pole access, all the cars went out for an early lap: proof of a difficult qualifying in a tricky circuit, nevertheless for weather changes.

After the first loop of outlaps, situation confirms the state of Ferrari’s power with the Italian team on 0.2 seconds of gap from Hamilton and 0.7 from Red Bull.

Things get interesting in time for Qualifying: Ferrari tops the third Free Practice session and confirms his domination in Spa. Lewis Hamilton crashed his W10, will he be there for the Pole?

Albon jumped out from the car been 14th with 5’ to go: more than half a second separated him from the safe zone; how will be it judged from Helmut Marko as the first Qualifying with the major team?

At the chequered flag Ferrari and Mercedes dominate the first rows with Magnussen, Grosjean, Norris, Stroll and Albon. Leclerc destroyed the wall of 1’43” for the first time in the weekend.

Ricciardo took the provisional as top teams were still launching for their outlap. But it’s Leclerc with a 1’42”644 who took the leadership at the first attempt: more than 6 tenths to current world champion Hamilton. Lock-ups for both Mercedes: traffic jam in the last sector with all the drivers trying to get the best performance possible early in the session.

For the last shot all drivers went for an all-in regrouping at Bus Stop turn: a battle within Ferrari went on with an improvement of Leclerc (1’42”519 his time) and Vettel gapped of 0.7 seconds (claiming traffic blocking and a lockup). Hamilton must give up to the second row with a dozen of thousands from the German, together with teammate Bottas. 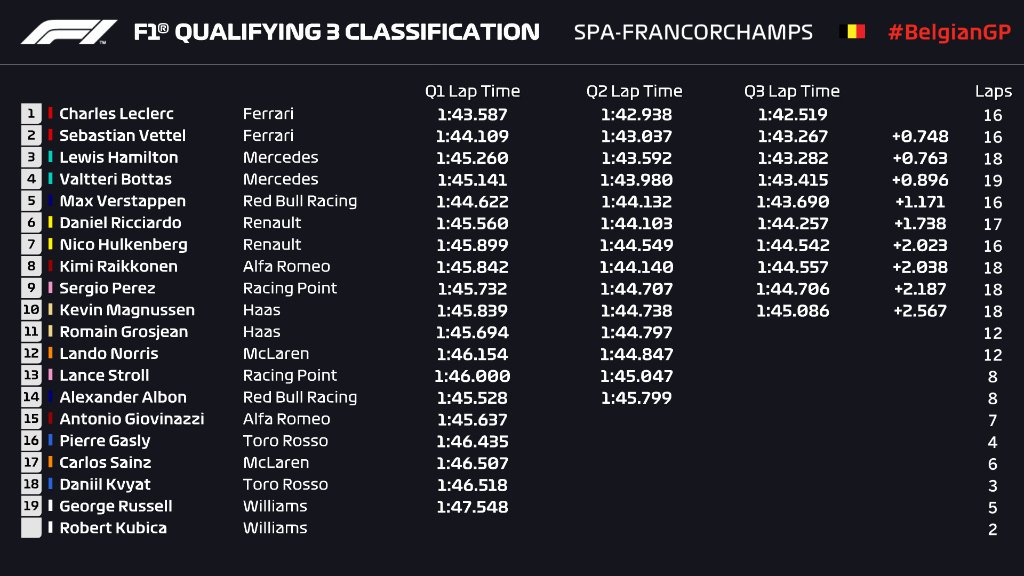 F1 | Singapore GP | Alonso not happy about the unreliability of his Alpine: "Really unacceptable"

F1 | Russell gutted for his contact with Schumacher, thinks Mercedes could have fought for victory