Free Practice 2 starts with everyone on track with dry tyres. Charles Leclerc was fastest in Free Practice 1 in the morning, with Ferrari in a great shape after Spa victorious weekend.

After just 10 minutes of FP2, team radio from Red Bull is telling Max Verstappen that there’s rain expected in 20 to 30 minutes. Lando Norris is the only one still to complete a lap, as he is in the garage with his mechanics working on the car.

Rain expected for second part of the FP2, and after 20 minutes Leclerc goes on top with 1:20.978 in a qualifying simulation with soft tyres. Vettel goes second in front of Verstappen, as Mercedes are still a second behind, after 25 minutes.

After half an hour it’s red flag to clean the track on turn 4 and 5 after Vettel ran wide.

When the lights went green again, there were some drops of rain, but not enough to make it full wet. “Too wet for soft tyres” said Kevin Magnussen regarding turn 6. Ferrari pit wall told Leclerc that Sunday could have mixed weather like this afternoon, so it could be good to have some runs despite the track conditions.

With half an hour to go, Lewis Hamilton is the only one to push hard despite of the light rain, going second with 1:21.046, just 0.068 behind Charles Leclerc.

Lando Norris went finally on track for the last 15 minutes. He refers about track conditions: “It’s dry everywhere apart from back straight and last corner”, with the McLaren rookie having to deal with track limits.

Hamilton went on a great pace on a long run in the last stint, below 1:25s, faster than Leclerc’s pace now on track. Pierre Gasly seventh with an impressive 1:22.124, just behind the two Red Bulls.

The session ended with Charles Leclerc again on top, in front of Lewis Hamilton, Sebastian Vettel and Valtteri Bottas. 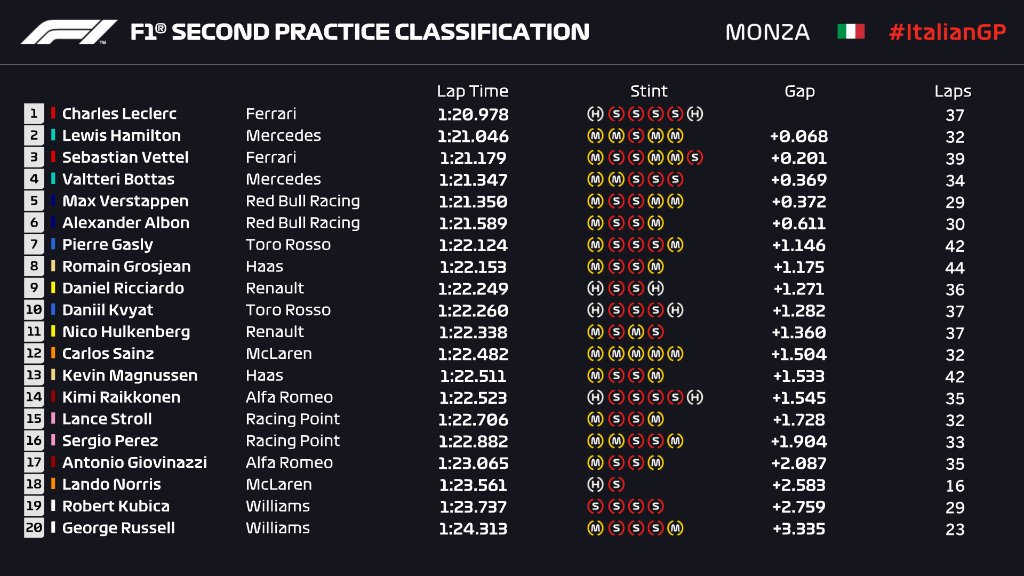