Green flag in Q1. First lap from Robert Kubica is 1:23.966. The two Renault goes in front with Hulkenberg in front of Ricciardo with a 1:20.155, both with soft tyres. Leclerc improved with medium in 1:20.126 and goes on top, while Vettel is sixth with 1:20.378. With 5 minutes to go, that lap time may not enough for the German who continues for further laps on the same set of tyres. Session stopped with 4:34 to go, as Sergio Perez caused a red flag in Q1, as he stopped is Racing Point in turn 3. It immediately restarted with Fernando Alonso watching McLaren drivers from the pit wall. Everyone went out on track, with Max Verstappen in the elimination zone as the only driver without a lap time yet. And it’s drama on the last minute as Max Verstappen slowed down referring on team radio that he has “no power”. Chequered flag in first qualifying with Grosjean, Perez, Russell, Kubica and Verstappen eliminated. First positions didn’t change with Leclerc on top in front of Hulkenberg, Bottas, Hamilton, Ricciardo and Vettel. Only 6 tenths of a second from P1 and P16 with Grosjean eliminated with 1:20.784.

Kev’s through to Q2! But Romain didn’t make it 😕

Q2 started with Kvyat setting the first time in 1:21.016, immediately beated by Magnussen and Stroll. The battle between the top teams finally began, everyone with soft tyres, with Leclerc first in 1:19.553 immediately followed by Hamilton and Vettel in less than 2 tenths of a second. Kimi Raikkonen went wide and re-joined after a run on the grass. Drivers at risk are Stroll, Norris, Giovinazzi, with Gasly and Raikkonen still with no time. Hamilton put himself on top with 1:19.464, but both Ferraris didn’t conclude their laps. In the midfield, great lap for Stroll who went P9 with a 1:20.498. Giovinazzi, Magnussen, Kvyat, Norris and Gasly. Unlucky qualifying for Antonio Giovinazzi as he is out in front of his home crowd, just 2 milliseconds behind his Alfa Romeo teammate Kimi Raikkonen. Hamilton closed second qualifying in front of Leclerc, Vettel, Ricciardo, Bottas, Albon, Sainz, Hulkenberg.

Kimi books a place in the Top 10 shootout! Tough luck for Antonio, who misses out on Q3 for just 0.002 - but will still be with a great shot at the points! #ItalianGP pic.twitter.com/3ZM1pGrsSj

Final qualifying started with some chaos on the outside of the pit lane, as no one wants to go in front and Vettel goes wide in turn 2. The German is then the first to close the lap in 1:19.457, beated by Leclerc in 1:19.307 and Hamilton in 1:19.346. But it is red flag as Raikkonen crashed in the last corner, aborting Bottas lap as he was close to the finishing line after a fastest sector 2. Vettel lap was probably over the white line outside Parabolica, so his lap may be cancelled if he put all the four wheels out. Top team drivers closed their first try in a +0.150 gap.

Moments into Q3 and Raikkonen goes into the barriers at the Parabolica 😮#ItalianGP 🇮🇹 #F1 pic.twitter.com/60w7UqoXy8

During the red flag stop, Bottas lap time was then recovered and put into third position with 1:19.354. Session finally restarted for the last 6:35 minutes. No one went on track until the last 2 minutes when everyone join together, but nobody is pushing to go in front. Sainz finally started pushing and he is the only one with Leclerc to be in the position to continue, as everyone else took chequered flag and failed to get a final lap chance. What a crazy end of qualifying as the Tifosi went crazy in the grandstands! Charles Leclerc took pole position and he didn’t even need to have a final lap, in front of Lewis Hamilton and Valtteri Bottas. Last lap of qualifying is officially under investigation. 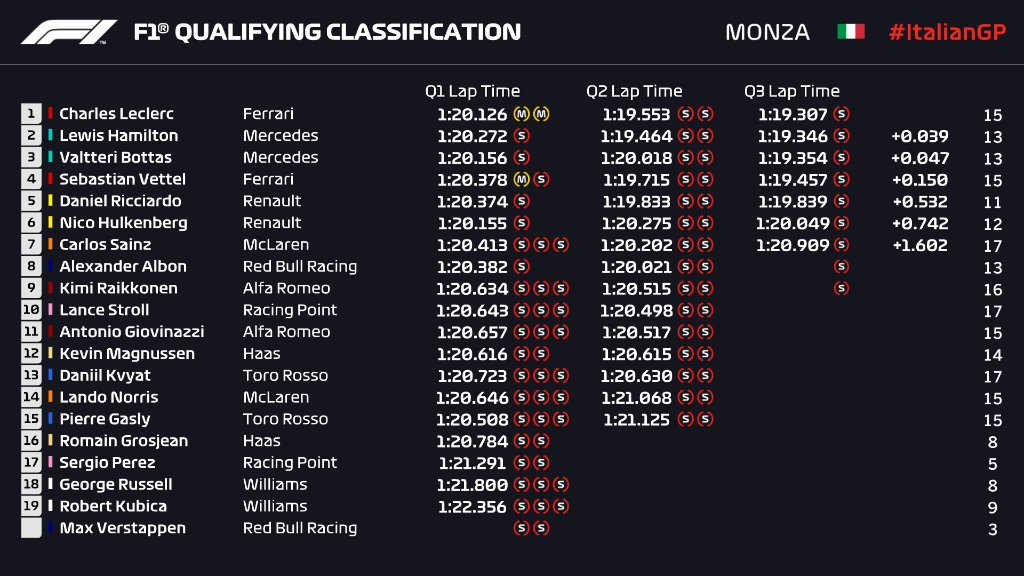 F1 | Latifi denies feeling extra pressure with De Vries as his teammate at Monza: “It’s more of a perception”