Within seconds of the session beginning, Carlos Sainz broke down in the McLaren and stopped just before T1. However, he returned to the track before the halfway stage of the session.

Valtteri Bottas posted the first time of the session on a 1:31.831. Hamilton beat that by just over a tenth almost immediately.

Hamilton eventually lowered his benchmark to a 1:30.832 on the mediums before pitting, 0.086s ahead of Bottas after the first run.

Behind the Mercedes’, Leclerc, Verstappen, Vettel and Albon followed. All four were on the supersofts. Perez, Norris, Stroll and Grosjean completed the top 10.

When Mercedes bolted on the soft tyres, Bottas and Hamilton extended their gap to the opposition.

Sainz, Perez, Stroll and Norris rounded out the top 10.

Grosjean, Raikkonen, Hulkenberg, Ricciardo, Magnussen, Kvyat, Yamamoto, Russell, Kubica and Giovinazzi filled positions 11-20. Yamamoto was less than a tenth off Kvyat as he showed impressive pace on his debut in a Formula 1 car.

Antonio Giovinazzi’s session was ruined by a hydraulic leak after completing just 4 laps on his maiden weekend at Suzuka. 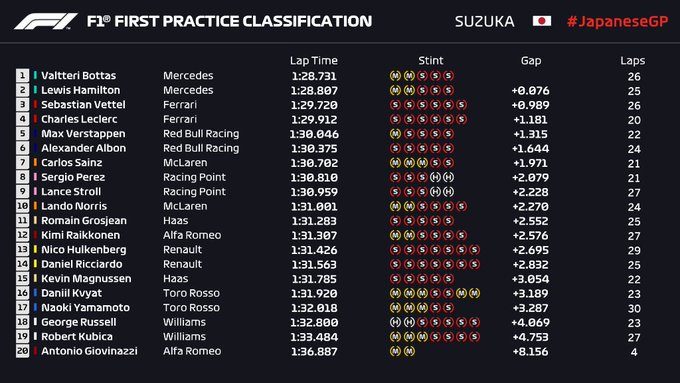