Before FP2, it was announced that if conditions are too bad on Sunday morning following the typhoon tomorrow, the grid will be decided by the results of Free Practice 2. It turned into a frantic session. 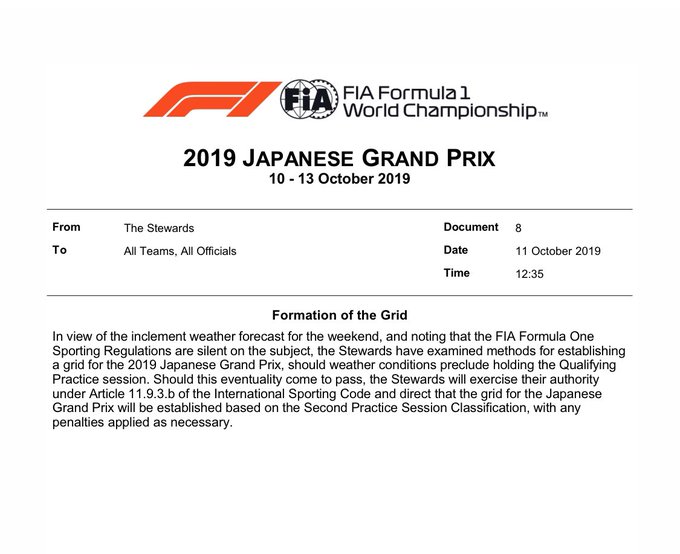 Sebastian Vettel logged the first time of the session with a 1:30.386 on the medium tyres. Grosjean and Magnussen slotted in behind the German using the soft tyres five minutes into the session.

Mercedes soon took over at the top when they went out on the track. Bottas on a 1:29.469 was 0.223s faster than Hamilton, with Albon a further 0.028s behind. All three were on the mediums.

Ricciardo and Sainz rounded out the top 5 as they used the soft tyres early doors.

The Mercedes boys then came out to respond, but it wasn’t totally smooth. Bottas spun out of the exit of the final chicane as he was preparing to start his lap.

Valtteri Bottas spins as he winds up to start his flying lap!

Lewis Hamilton has to slow down as a result, too!#Japanese 🇯🇵 #F1 pic.twitter.com/X7l2OkX9pT

Hamilton eventually got a clean lap in and smashed the opposition with a 1:27.896. Bottas and Vettel came next, just under half a second behind the five-time World Champion. Leclerc, Verstappen and Albon completed the order of the big six.

Mercedes and Red Bull went for second runs and Bottas usurped Hamilton by a tenth as Verstappen went 3rd. Albon split the Ferraris to be P5.

The teams switched their focus to race runs before some of them returned to qualifying simulations in the closing minutes.

Bottas remained quickest in front of Hamilton and Verstappen. Leclerc moved up to P4 in front of Vettel and Albon as Ferrari went on a low fuel run at the end of the session. 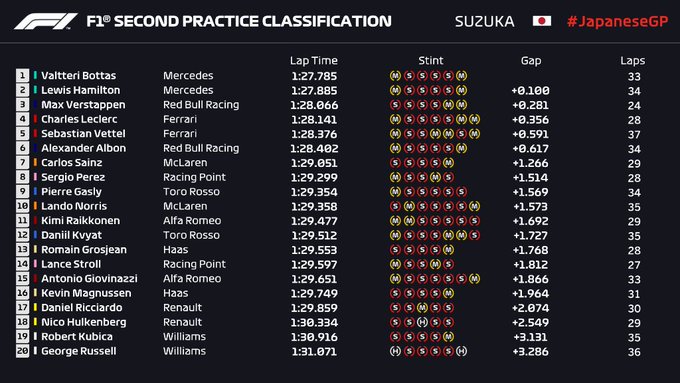 F1 | Williams' Robson: Hamilton "is a phenomenal talent" and Russell "has the potential to get there"