Antonio Giovinazzi logged the opening time of the session with a 1:20.600. Team-mate Kimi Raikkonen beat it by just over 0.3s a few seconds later.

Sebastian Vettel was the first of the big guns to set a time in FP2 and clocked a 1:18.697 on the medium tyres. Verstappen went a mere 0.023s slower soon after in his Red Bull Honda.

Turn 1 was causing problems. Giovinazzi and Ricciardo had lock-ups, as Charles Leclerc spun in his Ferrari when attempting a quick lap.

Alex Albon brought out the red flags 15 minutes into the session as he crashed at T7. The Thai lost the car as he turned in on the entry kerb and ended up in the barriers.

He appears to be fine - same can't be said about his RB15 😬#MexicoGP 🇲🇽 #F1 pic.twitter.com/EBhsq5ce5W

When the action resumed, there was a spin for Valtteri Bottas at turn 12 after running slightly wide. Sainz, Hulkenberg, Kvyat, Grosjean, Magnussen also had excursions at T1 as braking proved to be very tricky for the drivers.

Verstappen managed to match Vettel on the same tyres after the resumption; a 1:17.960 was the time for both men. Pierre Gasly produced a stunning lap to be less than half a tenth off.

Leclerc was the first of the big boys to do a qualifying sim and pumped in a 1:17.072. His Ferrari team-mate Sebastian Vettel battered that by 0.465s a couple of minutes later. The German’s 1:16.607 remained the fastest time of the session.

Toro Rosso had a very strong session with Kvyat and Gasly ending up in P6 and P7. Sainz, Hulkenberg and Norris rounded out the top 10.

Even on the soft tyres, Vettel and Perez struggled in the esses as they had big moments during qualifying simulations.

Graining proved to be a big problem for all the drivers as all compounds showed signs of it as the drivers did race simulations in the closing stages of FP2. Times dropped off by a few seconds after just a few laps.

Leclerc had a spin in the esses right at the end of the session, but he managed to continue. 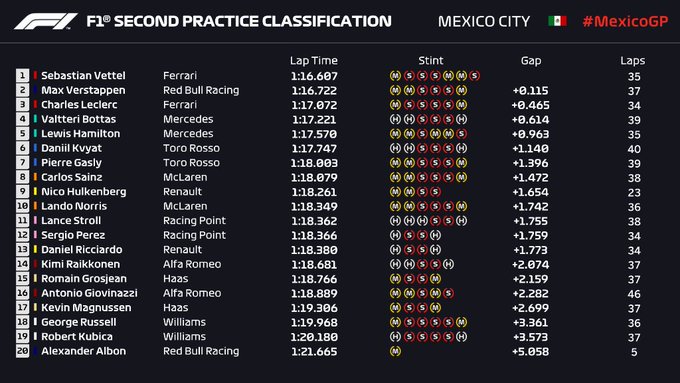