Overnight rain in Mexico meant the track was quite damp at the start of the final practice session.

Alex Albon pumped in the opening time of the session on a 1:31.539 on the intermediate tyres. The Thai eventually lowered his benchmark to a 1:27.463.

Verstappen leapt to the top of the charts at the 15-minute mark as the Dutchman posted a 1:26.118, 0.4s ahead of Hamilton and 0.6s in front of Albon and Bottas. Leclerc in 5th was the only other driver to have set a time by that point.

Neither Renault driver could do any competitive laps in FP3 due to a pollution of one of the cooling systems on both cars.

We appear to have the same issue on both cars - a pollution of one of the cooling systems, which requires careful cleaning before qualifying. Our guys are working hard to fix it but we’re unlikely to go out in this session.#RSspirit #MexicoGP #FP3

Kimi Raikkonen was the first driver to switch to dry tyres with 15 minutes to go and did a 1:21.673 on the softs to go fastest by 4.4s from Verstappen.

Sebastian Vettel banged in a 1:17.744 to post the first proper flier on the slicks. The German using the soft tyre to go P1.

The track continued to evolve as the session drew to a close and the times tumbled.

Charles Leclerc ended up fastest in final practice with a 1:16.145, 0.027s ahead of Ferrari team-mate Sebastian Vettel. Bottas and Hamilton were P3 and P4, 0.1 and 0.2s off respectively. 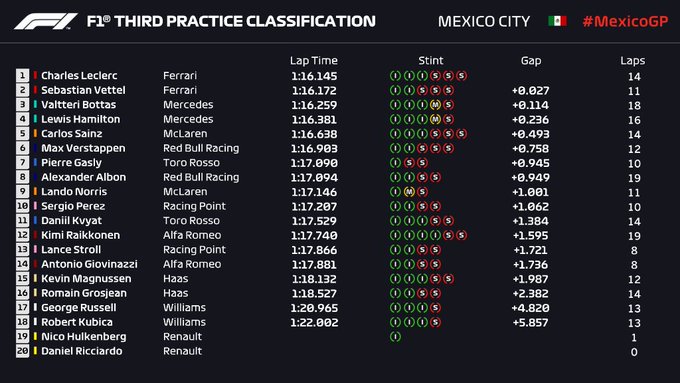