Valtteri Bottas logged the first time of the weekend with a 1:39.846 in his Mercedes. Team-mate Lewis Hamilton was very unhappy with the number of bumps around the track on his out lap.

There were quite a few problems for multiple drivers in the opening 35 minutes of the session.

Charles Leclerc was forced to return to the pits after complaining about a possible engine issue. Ferrari diagnosed a throttle problem. The Monegasque returned to the circuit just before the 45-minute mark.

Lando Norris also had problems as his headrest came loose. However, it was sorted quickly and he continued on his way.

Nicholas Latifi was on a flying lap when his car went into neutral and he had to crawl back to the pits slowly. His session was over because of a gearbox problem.

At the halfway point of the session, Albon led Verstappen, Vettel, Stroll and Leclerc as the teams tested the three different 2019 compounds and the 2020 prototype tyre, too.

Carlos Sainz spun in the esses section but managed to continue. Charles Leclerc ended up on the grass at T9. Daniil Kvyat spun at T1 at the end of the session as the drivers really pushed the boundaries. A lot of times were also deleted as multiple drivers exceeded track limits at T19 during the session.

Mercedes mainly focused on long runs for most of the session as the team put a lot of focus on testing the 2020 prototype tyre. 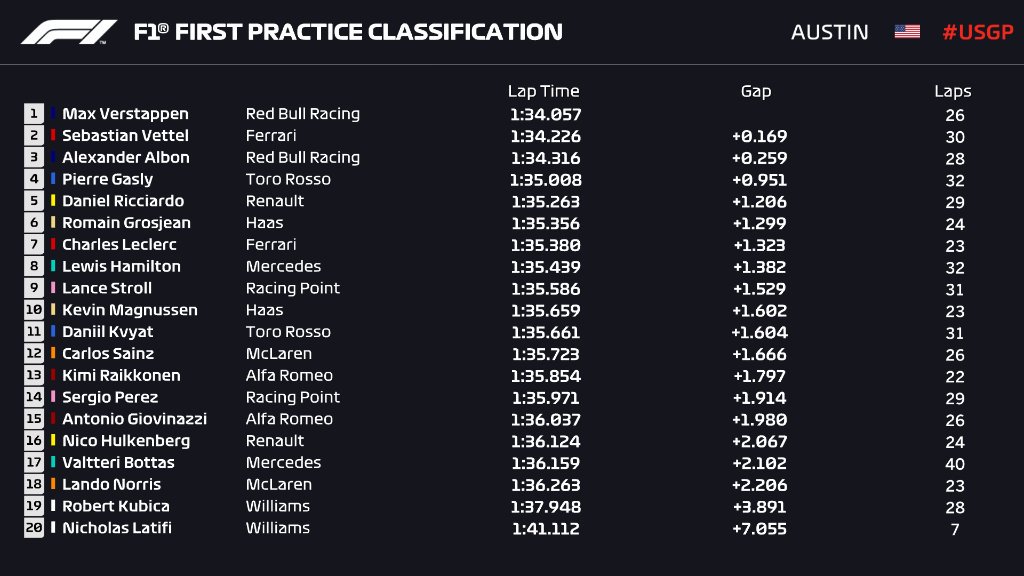