A catch up with Pierre Gasly, who was complaining about the increase of bumps before the action: “I will change something with my physio warmup to deal with it”; the main conversation of the weekend first touchdown in Texas was the surface conditions.

Robert Kubica has been the first car in hitting the track, followed by Alexander Albon and from teammate Russell, who missed FP1 for letting Nicholas Latifi at the wheel. Even McLaren set off for the track in the first minutes, ahead of Daniil Kvyat.

Robert Kubica leads us out for 90 mins of practice here at @COTA #USGP 🇺🇸 #F1 pic.twitter.com/kkL1XNWwkb

Not all the cars are equipped with the prototype Pirelli tyres for letting teams testing the new compounds for 2020, in the first part of the session: apart from the Russian and Russell the other cars were with the regular season rubber.

Both Haas are on track, while Kevin Magnussen complains about the increase on wind speed compared to FP1.

Running wide because of the entry bumps in Turn 1 braking zone, seems to be very likely to happen: sparkles are spread when cars reach the first bend, compromising the grip at the right of pit exit.

Romain Grosjean crashed causing the red flag: he’s the first victim of the twisty high-speed section, colliding with the barriers. Being caught unaware entering at Turn 5, the French was a mere passenger of his Haas stepping aside in the inside run off area.

🚩 RED FLAG 🚩@RGrosjean has spun and hit the barriers - he tells his team he's okay but the car is not#USGP 🇺🇸 #F1 pic.twitter.com/KZOyEB7w65

With the ‘big boys’ warmed up, some interesting lap times were set: Leclerc, Verstappen, Hamilton and Bottas the first two rows, with Vettel only 5th with one hour still to go. Different compounds set for teammates at Ferrari and Mercedes for the first run: Leclerc and Bottas with the Hard and Hamilton and Sebastian with the Hard one.

A spin for Giovinazzi in the slowest part of the track, isn’t helping the Italian in keeping the seat for next year.

Max Verstappen complaining about the tyres wear: the Dutch is still in search for another victory; moreover, even Albon was reporting some issues with the setup going on.

Only four cars still putting laps when 50’ minutes to the end of the session: the McLaren, very active in this session, Valtteri Bottas and Kevin Magnussen, running the only home team car on today.

The Finnish started the Quali stint wearing the Soft red tyres: but it’s Vettel going under the 1’34” barrier with the same kind of work. However, Charles Leclerc was able to give 3 tenths of a second to the couple, before Hamilton claims the top slot with the same gap to the Monegasque. Mercedes seem to be at ease with the second and third sector losing confidence in the first part of the COTA.

A good performance form Pierre Gasly, who with a 5th place is gaining confidence with his Toro Rosso: still no news regarding the 2020 line-ups of the two Red Bull teams. Lance Stroll also, is running 7th just behind the better performing cars.

When 35’ are left before the chequered only Albon is undergoing the test tyres, while most of the field is practising starts and fine tuning the Qualifying setup. Lewis Hamilton raised the statement that the temperature was falling: all the teams’ crews are in fact equipped with the winter completes.

The gearbox problems on Russell’s car seems to not have been resolved as the Briton claimed to have heard strange noises when exiting the pits for a practice start.

With 20’ minutes still to run, the first victim of the track limits technology is Lewis Hamilton, seeing one of his lap times being aborted for touching the green area outside the kerbs. This didn’t prevent to update his time to the 1’33”2, again 3/10 of second off the group behind him headed by Leclerc.

Sebastian Vettel ended one of his last laps with a spin of Turn 14: a peak’s pf power right after the left-hand hairpin and his Ferrari was on the gravel. Hamilton too, proved to be on the edge with a lockup at Turn 1.

Bumps could affect the gearbox reliability as Leclerc was advised to upshift before the Turn 9 surface vibrations.

Final drama was provoked by Stroll nearly hitting the Carlos Sainz’s McLaren at the hairpin before the longest three apex turn of the track.

The classification of the session: 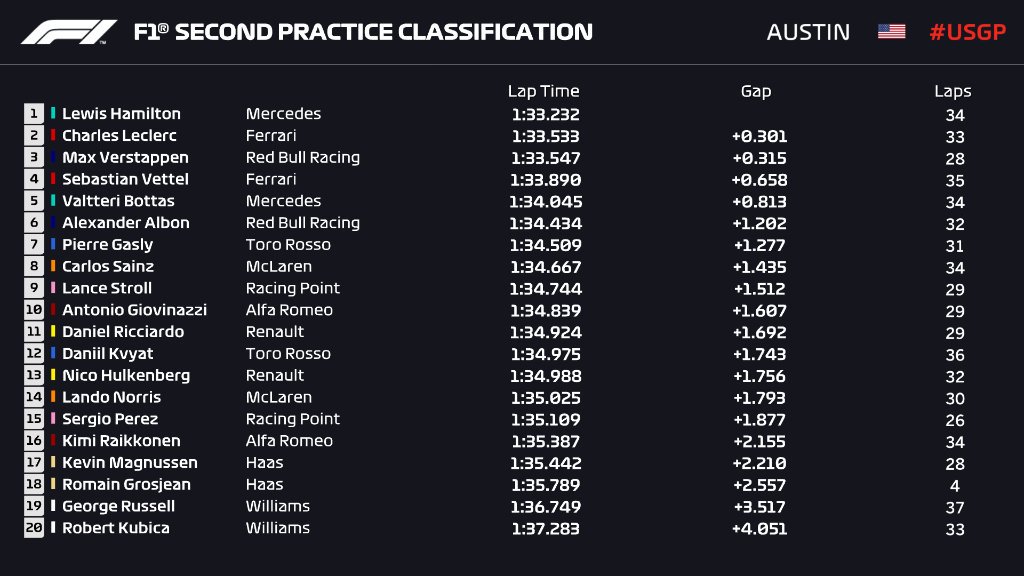 F1 | Franz Tost: "Gasly belongs, for me, to the absolutely top drivers"

F1 | Budkowski on Alpine struggles for race pace: We have work to do to understand