Heading into qualifying, Racing Point’s Sergio Perez knew he would be starting from the pit-lane for the race as he failed to stop at the weighbridge during FP2 yesterday.

The opening time of qualifying was set by Robert Kubica on a 1:38.302. Team-mate George Russell instantly beat that by 0.9s.

Raikkonen, Giovinazzi, Perez, Russell and Kubica were in the bottom five before the last attempts began.

Lando Norris put in a great lap at the end of the session to go fastest from Hamilton. A flurry of late improvements saw Magnussen and Stroll get inside the top 10, with Gasly going a magnificent P4.

Giovinazzi and Raikkonen got knocked out in Q1 despite improving their times and they were joined by Russell, Perez and Kubica.

Mercedes and Ferrari and Max Verstappen picked the medium compound for their first runs in the middle segment of quali.

Hamilton clocked a 1:33.045 to set the first time of the session. Albon usurped that by just over a tenth on the soft compound tyre. The Thai led Hamilton, Verstappen, Bottas, Leclerc and Vettel. Sainz, Gasly, Norris and Magnussen rounded out the top 10 after the opening flyers.

The Ferraris went for a second run on the mediums and Leclerc went fastest, just in front of Vettel. Albon, Hamilton, Verstappen, Bottas, Norris, Sainz, Ricciardo and Gasly completed the top 10 and booked their places in Q3.

Hulkenberg, Magnussen, Kvyat (final lap deleted for exceeding track limits), Stroll (error at T1 on his last attempt) and Grosjean got bumped out.

Valtteri Bottas set a new track record by logging a 1:32.029 on his first run of Q3, 0.012 faster than Sebastian Vettel. Verstappen and Leclerc followed, with Hamilton a lowly P5 after an untidy lap. A mere 0.292s covered the top 5 after the opening attempts.

Albon, Sainz, Norris, Gasly and Ricciardo completed the order before the last runs.

Despite improving on their second runs, Verstappen and Leclerc remained P3 and P4. Bottas held onto pole from Sebastian Vettel. The top 4 were covered by a mere 0.108s. 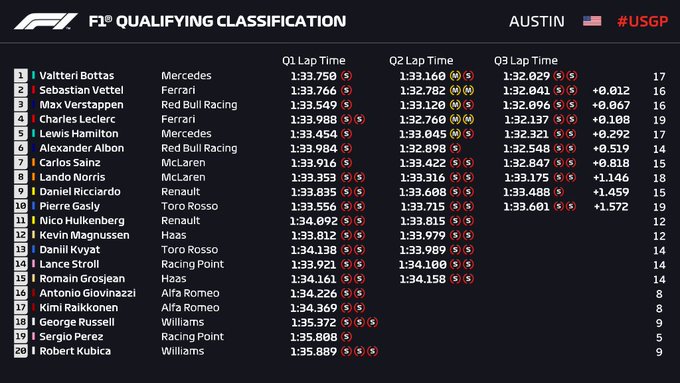