A sunny day awaited the teams and drivers for the race day at Austin.

An ultimate change of the rear wing for Max Verstappen car on the grid: Red Bull had seen some issues on the data due to a crack on the frame.

Sergio Perez started from the pitlane: after having ignored the compulsory weighting for his car randomly picked stewards decided to commit this penalty.

Good start from Bottas, while Vettel lost the position from Verstappen (at the start), Hamilton (outside overtake at the snake section), Leclerc, Norris and Ricciardo: “I have some damage” told to the radio. Some lockups followed in the next early laps.

VET: "I have some damage - I'm not sure how, I didn't feel anything"

Contact between Albon and Sainz: immediately pitted moving to the Hard compound; the contact did go under investigation right from the first replays showed but no further action was claimed.

The Stewards confirm this collision between Sainz and Albon on Lap 1 is being investigated #USGP 🇺🇸 #F1 pic.twitter.com/2sT1Xdkr53

Sebastian Vettel's race is over

He retires with what looks like a suspension problem#USGP 🇺🇸 #F1 pic.twitter.com/ZRPYmTbWtr

The famous Ricciardo’s braking seen when passing Lando Norris: at the hairpin after the longest straight the Aussie claimed the Briton’s 5th slot

Another battle between Magnussen and Kvyat for the 10th position: still some points at disposal for the middle-filed teams. Perez and Giovinazzi too, with the Mexican claiming the Italian position, followed by the Thai Albon.

A possible front wing damaged for Verstappen told to the Dutch from his engineer. After the first 10 laps frozen positions at the front: Bottas Verstappen, Hamilton and Leclerc.

First pit stop for Verstappen at lap 14: Hard compound for him; reaction for Mercedes: Bottas stopped for a similar tyre set on the following lap. The Finn re-claimed the second place on Leclerc with an easy overtake at the first turn hairpin: Verstappen too got over the Ferrari.

At the midway point of the race, Hamilton still needed a pit stop, while Giovinazzi, Sainz and Magnussen completed their one. Behind the Hammer, Bottas at 6 seconds, Verstappen at 11 and Leclerc at 21. A problematic pit for Leclerc at the 21th lap: the rear left gun was the issue of a 4 seconds stop.

Other battles going on were the Raikkonen and Grosjean one. But again the Ricciardo’s braking made another victim: Sergio Perez unexpectedly saw the Renault at the first bend.

With Lewis Hamilton in touching distance of a 6th F1 world title, another graphic has entered the world of F1 to help the viewer and raise the entertainment level...but does it?

After suffering the lost of the first position from Bottas, Hamilton pitted on lap 25 for the Hardest choice of Pirelli

Daniil Kvyat, being caught in the middle of the Racing Point, suffered Sergio Perez virulence at the stadium hairpin section.

With about 20 laps to go the situation was: Bottas leading with 7 seconds on Verstappen, 16 on teammate Hamilton and 42 on Leclerc. The only drama was the retirement of Robert Kubica: no clear signs of the cause.

Verstappen pitted at 35th lap for a Medium set, getting third behind the ‘Silver Arrows’. Immediate copy-and-paste reaction for Bottas: Lewis claimed the lead and the Finn his runner-up.

The chase of Bottas over Hamilton seemed to be repeated again: Finnish got closer and closer to the Briton while Verstappen was requested to gain 8 tenths per lap in order to have the chance to spar for the second place on the podium.

The second pit for Leclerc at the 43th lap: the Soft tyre needed for hoping the fastest lap performance. Excitement for Hulkenberg face to face to Raikkonen for some corners: a cut for the German prevented him in keeping the position without consequences.

🎧 RAI: "I think he was off the track there?" #USGP 🇺🇸 #F1 pic.twitter.com/eGqDYqmMvp

A good overtake for Albon over Ricciardo for the 5th place: a position that may seal the seat for the next season.

The sparkles begun at 5 laps to go: a late braking for Hamilton before the straight let Bottas try the move at the following hairpin, with the Finn being ‘gently’ pushed at the outside. But the tyre wear for #44 was over the tolerable: at the following lap, thanks to DRS, the overtake could be accomplished.

Fighting for the win 👀

After being denied by Hamilton, Bottas takes P1 on the next lap#USGP 🇺🇸 #F1 pic.twitter.com/Ja4NfAZepL

Magnussen brake failure after the DRS zone prevented Mad Max to claim the second place to Hamilton. Here the classification after 56 laps: 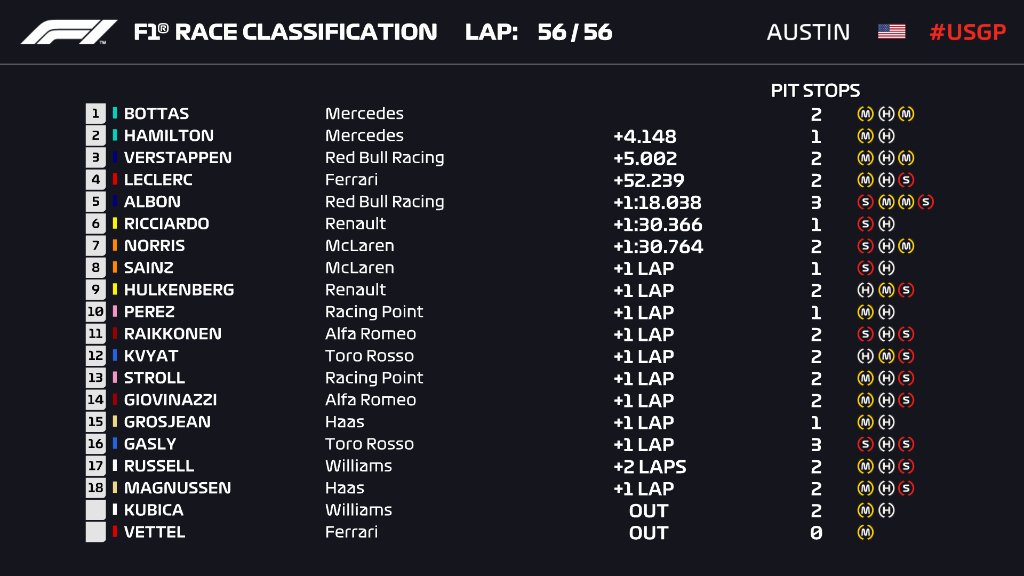 There are parking spaces

And there is this parking space ⬇️ 🤩 🏆#USGP 🇺🇸 #F1 @LewisHamilton pic.twitter.com/2FtgUoIzyc