After a series of installation laps in the first 20 minutes of the session due to the heavy rain, Carlos Sainz banged in the opening time of the session with a 1:23.689 on the full wet tyre. The Spaniard lowered his time to a 1:22.149 before pitting.

Charles Leclerc in his Ferrari lowered the benchmark to a 1:21.259 on wets before the switch to intermediates took place. Sainz, Vettel, Kvyat, Norris, Gasly and Russell were the other drivers to set a time on the full wet tyre.

The Monegasque immediately battered his own best lap after switching compound. He logged a 1:17.285 on the inters to remain at the top of the standings at the halfway point of the session. Team-mate Sebastian Vettel took over at the top of the leaderboard by clocking a 1:17.041.

The drivers tried the dry tyre in the final 5 minutes of opening practice, but the track was very slippery and Red Bull hit trouble. Verstappen spun in the Senna esses, whilst Alex Albon crashed at T12 after losing the rear on corner entry. It brought out the red flags to end the session early.

Daniil Kvyat also spun at turn 1 before the red flag as the track proved to be too tricky on dry tyres.

Both Verstappen and Kvyat spun at the tricky Senna S#BrazilGP 🇧🇷 #F1 pic.twitter.com/2XqSxEsr7e 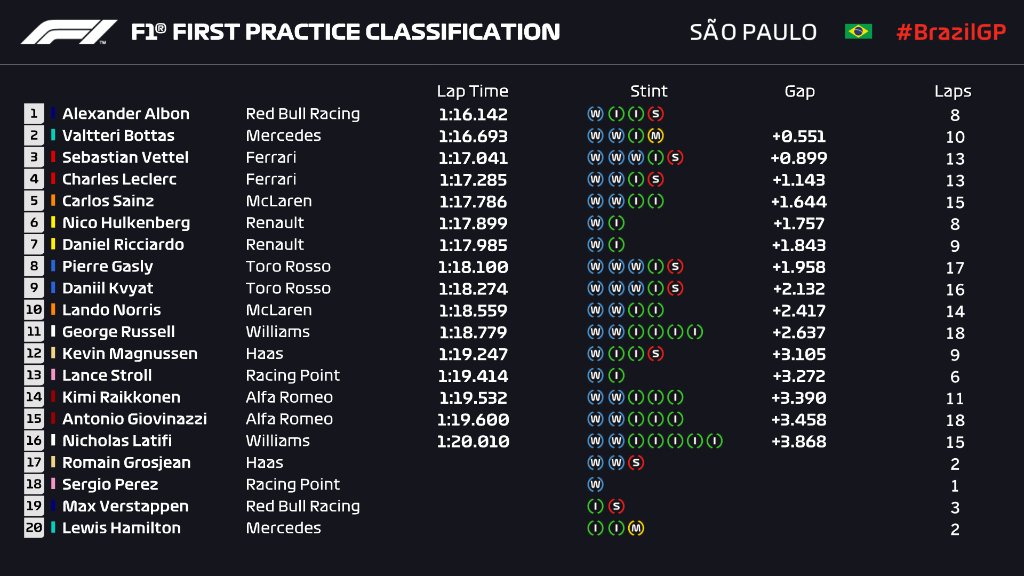