A dry weather and track were awaiting the drivers and teams for the first time in Interlagos this Friday: with a 30% of rain forecasts, everyone could try to tune the setup for the dry expectations for the rest of the weekend.

The newly confirmed Antonio Giovinazzi was the first to tackle the tarmac. The first lap time was set buy Valtteri Bottas: 1’10”812.

A sudden red flag blocked the time with just 5 minutes gone: Robert Kubica lost control at turn 2 after the Senna chicane; a violent pendulum effect left little chances to recover his Williams to the Polish.

Action resumed with Alex Albon re-joining the pack after that mechanics rebuilt his car from the floor damages provoked by his crash in FP1.

Some rain spitting on the cameras as the Ferrari were standing on the first two slots of the grid: 1’09”570 for Sebastian Vettel and about 2 tenths of gap for Charles Leclerc.

As the 1-hour countdown kicked off, rain intensified and the green wet Cinturato tyres were mounted on Daniel Ricciardo’s car.

A new Pitot tube mounted on the very end of Hamilton’s car nose. Only Verstappen and Russell stayed out on track while all the left field was inside garages.

A danger moment for Hamilton and Vettel encountering Bottas in the last corners: probably a penalty coming for the Finn. In the same time, Daniil Kvyat suffered a spin at the descent of the Senna chicane; no damages for the Russian’s Toro Rosso.

Half an hour marked an issue for Giovinazzi as he was losing power in his Alfa Romeo: work ahead in the cooling panel.

Statement from the stewards assured no further action was taken for the incident involving Bottas and Leclerc nearly colliding at the pit lane exit.

The stewards had a little look at this...

But Charles and Valtteri can rest easy - no further action will be taken#BrazilGP 🇧🇷 #F1 pic.twitter.com/P7A9SNbClI

Pierre Gasly parked the car causing a VSC with 20 minutes to go: a white smoke coming from the air intake wasn’t a good sign for the entity of damages to that PU.

Game over in FP2 for @PierreGASLY #BrazilGP 🇧🇷 #F1 pic.twitter.com/cbhOKDPxeo

With 10 minutes running, both Ferrari were keeping the first row even with the qualifying runs going on. Another red flag was deployed due to the fire from the other Toro Rosso of Kvyat: a photocopy of Alex Albon crash, this time caused by the cut off the power.

Here the results of the session: 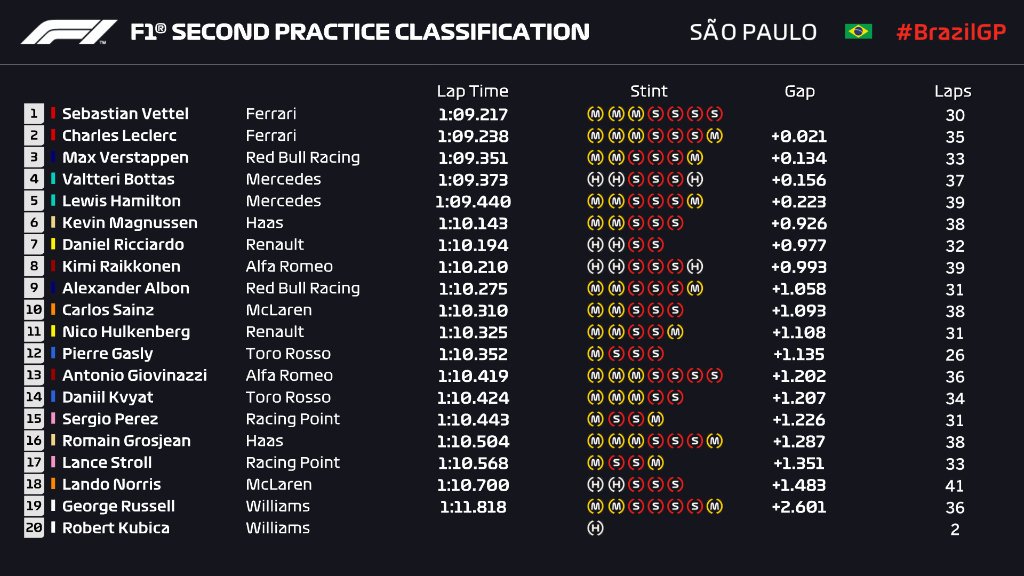