After a stunning performance earned on the (battle)field of Sunday’s race, climbing from 20th to 4th, Valtteri Bottas topped the timesheets for the first time at the Pirelli post season testing days; the Finn made clear for one more time the extra strength of 2019 Mercedes: 138 laps covered and a 1’37”124 as the best lap time were their ‘business cards’ for a more consistent 2020.

Last word from @ValtteriBottas after 138 laps of #F1Testing in Abu Dhabi!

Catch you in Malaysia tomorrow for the @PET_Motorsports celebrations, VB 👊 pic.twitter.com/4Ed0PwxTHg

Sebastian Vettel climbed up to the second slot: about 8 tenths has been the gap to the Silver Arrow severed in 136 laps. A contact with Sergio Perez gave to Seb a drizzle, when the Mexican tried to pas the German, making the Ferrari spinning at the second straight braking point.

Brown anticipates a detail on the McLaren-Mercedes partnership and praises the synergy between himself and McLaren team principal Andreas Seidl.

The good season of Toro Rosso and the good performances of Daniil Kvyat seen in the championship: a third time closed the 72 laps covered; the other car was driven by Sean Gelael, 67 laps for gaining confidence in a F1 chassis. Perez himself closed the ‘best of the rest’ zone, having 1”3 of gap to the leader.

🗣️"67 laps completed this morning. We got a good amount of tyre testing done and it was great to get back in the car after a year break. There was for sure more potential in the lap time, but we are here to test." - @gelaelized #F1 #F1Testing pic.twitter.com/PxlzqJVXQc

Grosjean, Norris, Verstappen and Ocon were the group hammering the 1’39”: the French of the Haas secured the recovery of the last glimpses of the year; Norris confirmed the downhill of pace hurting McLaren in the last race; ‘Mad Max’ proved to be fastest even being the only one not using the softest tyre compound; while Ocon made his debut after one year in the role of tester at Mercedes.

In the last positions saw George Russell and Roy Nissany of Williams, together with Kimi Raikkonen, closing the field. The Grove cars ended up the day reflecting lack of the season, letting the Israeli driver, son of Cianoch former tester of Minardi and Jordan, try the feeling of the maximum single seater cars; even ‘Iceman’ was obliged to being relegated to the back.

Turning his first laps of the test, @RoyNissany heads out in the FW42 for the rest of the afternoon ☀️ pic.twitter.com/i00JE6P3ZH 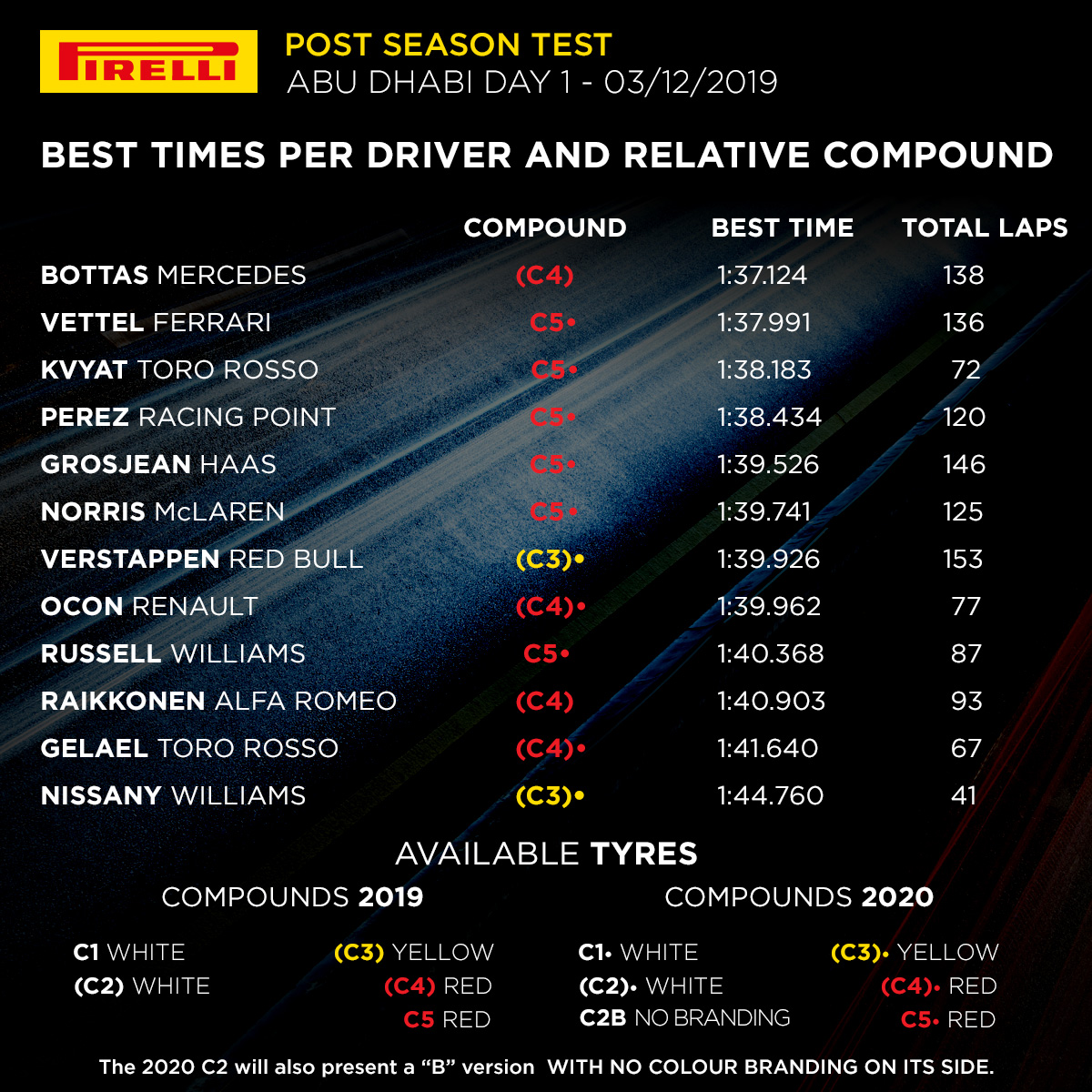 F1 | Secrecy and lack of spectacle on television do not justify technology spend by F1 teams, says Piero Ferrari

F1 | Lance Stroll compliments his father for his ...