Valtteri Bottas clocked the fastest time of the morning in his new Mercedes with a 1:17.313 on the C3 tyres. The Finn was 0.062s faster than Sergio Perez in the Racing Point, who was also on the C3 compound.

Max Verstappen and Carlos Sainz followed in P3 and P4, using the C2 tyre. The Dutchman and Spaniard were 0.4s and 0.6s off Bottas’ time respectively.

Ocon, Russell and Leclerc (all on C3s) were all within a second off the Finn’s quickest lap as well. Russell’s 1:18.168 was just over 0.9s of a second faster than his qualifying time at the same track last year.

Robert Kubica came next in the Alfa Romeo on C4s, as Kevin Magnussen (C2s) and Daniil Kvyat (C3s) completed the order of the morning runners. Only 1.174s covered the field at the end of the morning.

Verstappen completed an incredible 91 laps, followed by Bottas on 78 and Russell with 73 in the Williams. All ten drivers logged more than 50 laps.

It was a quiet session for the most part, but Kevin Magnussen had a small spin at Turn 9 in his Haas.

Hamilton quickly established himself at the top of the charts on a 1:17.293 using the C3s. He improved to a 1:16.978 on the C2s, before lowering that by 0.002s to finish the day on top. Bottas’ time from the morning kept him in 2nd, with Sergio Perez rounding out the top 3.

Max Verstappen had an interesting afternoon. Whilst he improved his best time by a couple of tenths to end up P4 (C2), he had two spins at Turn 13 and a small trip across the gravel between Turns 7 and 8.

Kvyat (C2s), Sainz (C3s) and Ricciardo (C2s) all managed to get within a second of the benchmark set by Hamilton as they filled positions 5-7. Ocon, Russell and Stroll rounded out the top 10 at the end of the day.

Leclerc, Latifi, Kubica, Magnussen and Giovinazzi were the remaining drivers to do laps on the opening day of the test. Just 1.490s covered the top 14, with Giovinazzi in his Alfa Romeo focusing on longer runs in the afternoon as he ended over 3 seconds off Lewis Hamilton’s quickest lap.

Verstappen did the most laps of any driver with 168, closely followed by Carlos Sainz on 161. All teams managed to complete over 100 laps on a mammoth day of running. 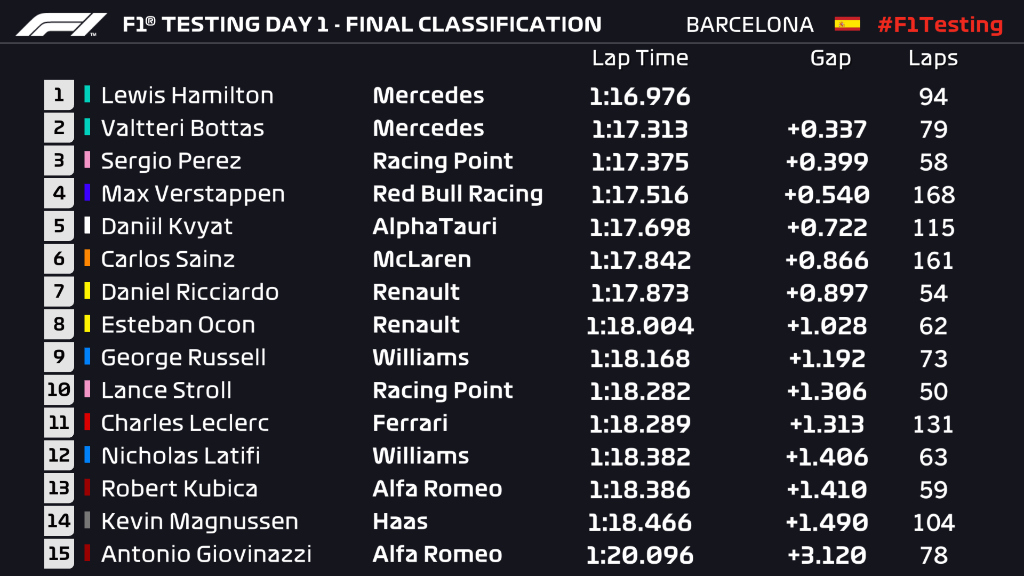