The second free practice session of this second round of the Austrian GP has ended, with the fastest lap signed by Verstappen with the time of 1:03.660. Second position for Bottas and third position for Perez.

Stroll, Sainz, Hamilton, Albon, Norris, Leclerc and Ocon complete the drivers in the first ten positions. More problems and difficulties for Ferrari with Vettel that ends even in fourteenth place. Not a perfect session however for Lewis Hamilton as well, that ranks in sixth position, seemingly not having found a great feeling with the car yet.

One of the arguments that keep centre stage in this second session of free practice was the penalty given to Lando Norris during the first session of this morning. The British driver, that last week achieved his first podium in Formula 1, got a penalty of three positions on the starting grid for overtaking the Alpha Tauri of Gasly under the yellow flag.

Daniel Ricciardo then has been protagonist of an off-track that forced him to interrupt his free practice session. The Australian driver infact lost his car going crashing against the barriers, temporarily causing as well the red flags.

Daniel Ricciardo is out of his car

He is being transported back to the pit lane to be checked by doctors#AustrianGP 🇦🇹 #F1 pic.twitter.com/ujaHogWNX5

What is important about this second session of free practice of the Styrian Grand Prix is that this classification could be the starting grid of Sunday afternoon. This because heavy rain is expected for tomorrow, and the chances of seeing both the third session of free practice and the qualifying canceled are quite high. Doing the qualifying on Sunday morning does not seem possible for this weekend, so if tomorrow the qualifying should be deleted because of the weather, the classification of the second free practice session will correspond to the starting grid of the race. 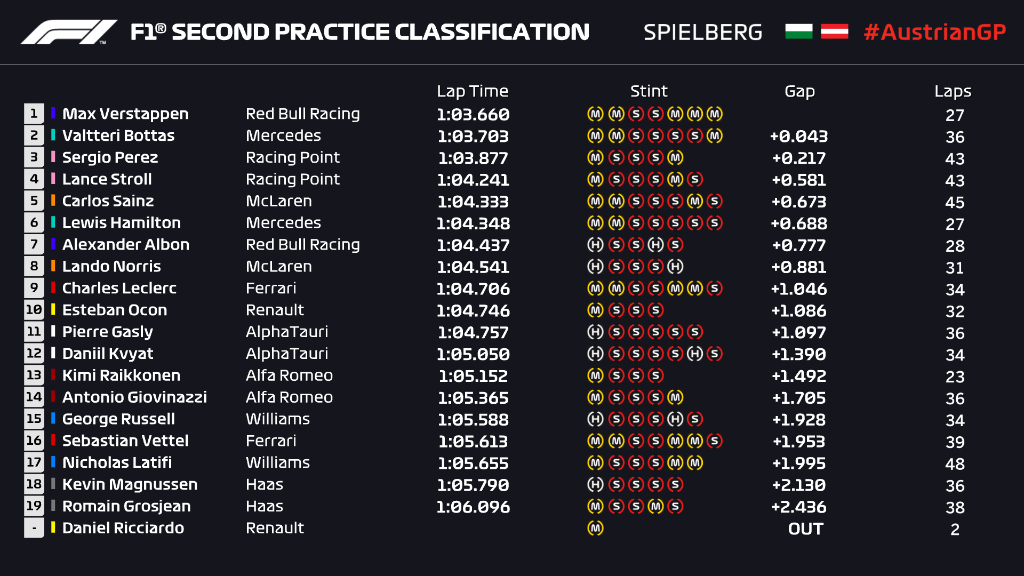