After a 45-minute delay to qualifying because of the extreme weather conditions, the session got underway.

Sebastian Vettel set the opening time of the session on a 1:24.235. George Russell briefly took over the time for a moment when he posted a 1:24.0.

With 10 minutes to go, Verstappen led Bottas, Leclerc and Hamilton as the times tumbled. Verstappen’s 1:20.621 was a tenth ahead of the Mercedes driver. Ocon completed the top 5.

Before the final runs began, Hamilton led Norris by 0.047s, with Bottas, Ocon and Sainz rounding out the top 5. Russell, Perez, Gasly, Giovinazzi and Grosjean were in the bottom five.

Looking to get out of the bottom five, Antonio Giovinazzi got on the kerb in turn 9 and spun into the wall. The session was red-flagged in the closing seconds as the Alfa Romeo stopped at turn 4. It cost Nicholas Latifi in particular who looked set to improve and get out of Q1.

Hamilton topped the times from Verstappen, Norris, Sainz and Bottas. Ricciardo, Ocon, Stroll, Kvyat, Gasly, Vettel, Russell (his first time to get out of Q1 in his career), Leclerc, Albon and Magnussen also made it through.

Raikkonen, Perez, Latifi, Giovinazzi and Grosjean were knocked out. The French driver failed to complete a qualifying lap after more problems with his Haas.

Valtteri Bottas started Q2 strongly and banged in a 1:19.006 to be over a second clear of everyone else after 4 minutes in the session. Verstappen and Stroll followed the Finn.

Hamilton took over the top with 5 minutes to go, a tenth clear of Verstappen. Norris, Bottas and Ocon completed the top 5 before the final attempts started.

Leclerc, Russell, Stroll, Kvyat and Magnussen found themselves in the knockout zone. The rain seemed to intensify in the closing moments of the session and none of the bottom five could improve their times and dropped out.

Hamilton was P1 with a 1:17.835. He was once again ahead of Verstappen. Norris, Bottas, Gasly, Ocon, Sainz, Albon, Ricciardo and Vettel also made it to Q3.

For the second straight weekend, Ferrari found themselves in P10 and P11 in the middle segment of qualifying.

Verstappen stormed to the top of the charts in the early stages as the weather got worse. However, Hamilton and then Bottas beat the Dutchman with five minutes to go in the final segment of qualifying.

Hamilton put in a series of stunning laps at the end of qualifying and took pole with a 1:19.273, over a second clear of Max Verstappen and the outstanding Carlos Sainz. 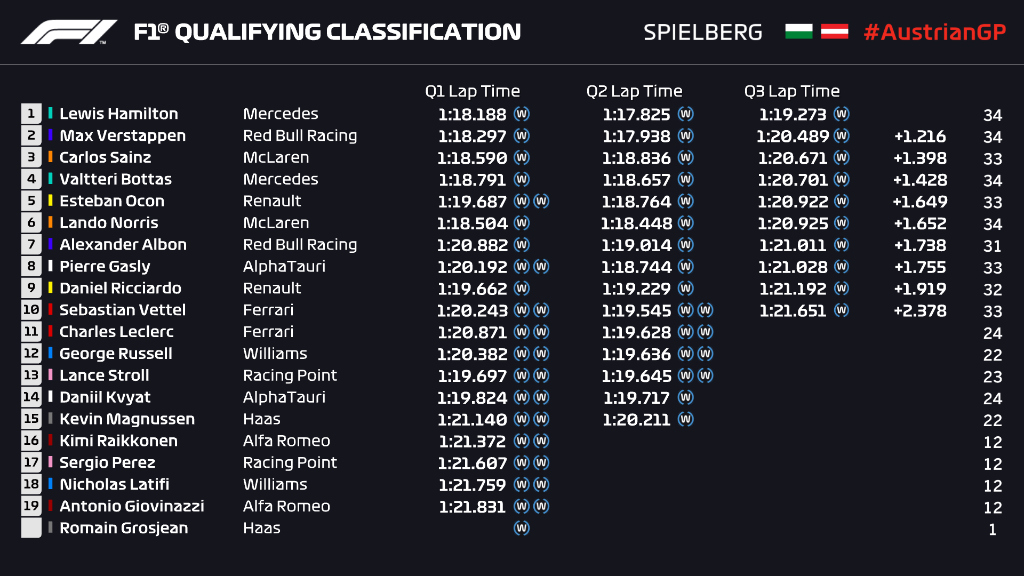