Off the line, Bottas fended off Hamilton into turn 1. Verstappen jumped Hulkenberg for 3rd, with Stroll taking P5 from Ricciardo. Norris jumped up from P10 to P8 on the opening tour. The biggest winners were Magnussen and Giovinazzi as they gained four places.

Sebastian Vettel spun in turn 1 all on his own and dropped to the rear of the field in his SF1000.

Alex Albon made an early stop at the end of lap 6 as he was stuck in traffic in 9th place. Gasly responded to the Thai a lap later and stayed in front.

Bottas and Hamilton started struggling with the mediums and they boxed on laps 13 and 14 respectively. Verstappen took over the lead on his hard tyre as he was stalking the Mercedes’ before their stops.

Going long paid off for Charles Leclerc as he overcutted Gasly and Albon, and quickly disposed of Norris on track.

At the halfway point, Verstappen led from the two Mercedes as he continued to pull away despite not pitting. The Mercedes' were struggling with blistering on hard tyres.

Verstappen pitted on lap 27 and rejoined just behind Bottas. However, he immediately cleared the Finn in Luffield and disappeared up the road. Verstappen and Bottas both pitted at the end of lap 32 as Red Bull covered off a potential Mercedes undercut. It left Hamilton out front from the Dutchman and Finn.

A spate of midfield stops, including the Racing Points, Norris, Albon and Ricciardo left Charles Leclerc in P4. Hulkenberg, Stroll, Kvyat, Ocon, Sainz and Albon rounded out the points scorers on lap 35.

Hamilton finally pitted for a second time at the end of lap 41 and returned to the track in 4th. Verstappen led Bottas, Leclerc, Hamilton, Hulkenberg, Stroll, Albon, Ocon, Norris and Kvyat following the Brit’s stop. Hulkenberg pitted in the closing stages and dropped behind both Stroll and Albon.

Hamilton charged on his newer tyres in the final laps to overtake both Charles Leclerc and Valtteri Bottas. Albon’s surge through the field also continued and he passed Stroll with 3 laps to go to take 5th.

A stunning drive by Max Verstappen gave him the victory from Hamilton and Bottas. Charles Leclerc drove a stonking race to finish 4th, stopping only once. 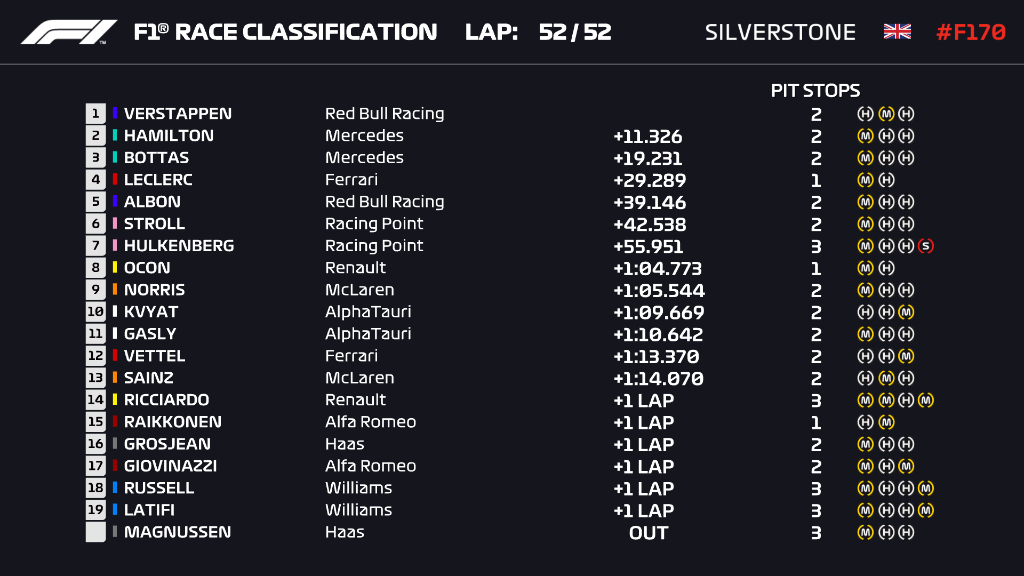 F1 | Part 1 of MotorLat's exclusive interview with Kimi Raikkonen: ''I've made zero plans for next year'', adds qualifying ''hasn't been that good for me'' recently