Kevin Magnussen logged the first time of qualifying with a 1:45.377, but that was immediately beaten by Grosjean as the Frenchman went 0.3s quicker on a 1:45.073.

Hamilton and Mercedes quickly flexed their muscles as the Brit laid down a 1:42.323, 0.211s quicker than Bottas. Behind them, just 0.317 covered Verstappen in P3 and Norris in P11 before the final runs started; Ferrari found themselves in P14 and P18.

Latifi, Magnussen, Raikkonen, Vettel and Grosjean found themselves in the elimination zone before the final fliers began.

At the end of the session, Vettel managed to put in a great lap to go P13, ahead of Russell and Leclerc. Raikkonen put in a strong lap to miss out by less than a tenth and almost knocked the Ferrari of Leclerc out.

Magnussen took a trip through the gravel on his last attempt and ended up qualifying slowest.

The five drivers who failed to make it through were Raikkonen, Grosjean, Giovinazzi, Latifi and Magnussen.

Hamilton, Bottas, Verstappen and both Racing Points went out on mediums at the start of the session to try and make it through on a harder compound compared to most.

The Brit banged in a 1:42.014 to set the benchmark, a tenth ahead of Bottas. It remained the quickest time at the end of Q2.

Verstappen went P3 behind the Mercedes’, 0.459s adrift. Ricciardo and Ocon put in strong times to be P4 and P5, with Albon P6. Gasly, Norris, Sainz and Kvyat completed the top 10 ahead of the final fliers.

A flurry of improvements at the end saw things change big time. Both Racing Points found a good amount of time to knock out Kvyat and Gasly; Stroll went P7 and Perez climbed up to 9th. Norris squeezed into Q3 by 0.008s and 0.023s from Kvyat and Gasly respectively as the midfield fight was as intense as ever.

In the dropzone and the drivers who did not make it into the final segment of qualifying were Kvyat, Gasly, Leclerc, Vettel and Russell.

Hamilton put down a cracking time at the start of Q3 with a 1:41.451, a full 0.578s in front of Bottas. Ricciardo did a great lap to go P3, ahead of the Red Bulls of Verstappen and Albon. Sainz, Ocon, Perez, Stroll and Norris rounded out the top 10 before the last runs of qualifying.

Hamilton lowered his time to a 1:41.252 as he comfortably took pole from Bottas by 0.511s. Verstappen was a mere 0.015s behind the Finn. Ricciardo ended up a brilliant 4th despite failing to improve on his final run. Albon completed the top 5. 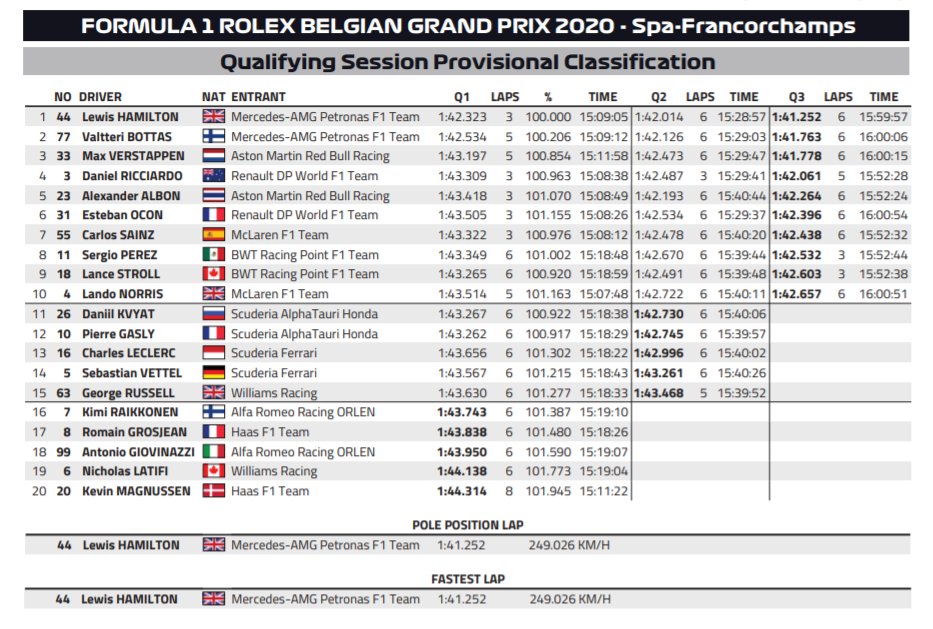