Off the line, Bottas made the best start and jumped Hamilton to take the lead. Behind, there was absolute chaos. Verstappen looked to have power problems and got hit into T2 by Raikkonen, as the Finn tangled with Gasly. Verstappen and Gasly both ended up in the gravel and out of the race.

Last week's winner is also OUT! @PierreGASLY is another casualty of the contact in the midfield on the opening lap#TuscanGP 🇮🇹 #F1 pic.twitter.com/BEb4zNbWI4

He then got caught up in a midfield tangle before ploughing into the gravel at Turn 2 😮#TuscanGP 🇮🇹 #F1 pic.twitter.com/v89iNL2S2D

Raikkonen was left with a broken front wing. Grosjean was also involved in that incident but could continue despite contact with Gasly.

Carlos Sainz spun whilst battling Stroll between turns 2 and 3; the Spaniard had the tiniest touch with the Canadian and went around. Sebastian Vettel clipped him as he tried to avoid the McLaren. The German broke his front wing.

Bottas led Hamilton, Leclerc, Albon, Stroll, Ricciardo, Perez, Norris, Kvyat and Ocon was the top 10 as the Safety Car was deployed to clear up the mess. Raikkonen and Vettel pitted to change their front wings and dropped to the tail of the pack.

The restart saw complete carnage in the midfield. With Bottas waiting until the last possible moment to get back on the power due to the strong slipstream, it all got bunched up towards the back.

Giovinazzi, Magnussen, Sainz and Latifi all retired following a nasty pile-up. The Alfa Romeo driver hit Magnussen and Latifi; Sainz then clouted into the Italian as he couldn’t avoid the crash in front. Thankfully all drivers walked away from it.

The incident brings out a RED FLAG 🚩

Four drivers were involved in this crash - Giovinazzi, Latifi, Magnussen and Sainz - all are out of their cars and seemingly ok 👍#TuscanGP 🇮🇹 #F1 pic.twitter.com/vE0FuXm0A9

Ocon retired during the red flag period due to brake issues. Ahead of the standing restart, the top 10 was Bottas, Hamilton, Leclerc, Albon, Stroll, Ricciardo, Perez, Norris, Kvyat and Russell. Only 13 cars were left in the race after the two early incidents.

Bottas got off the line well on the restart, but Lewis Hamilton brilliantly went around the outside with a late braking into turn 1 move to take the lead. Stroll, Perez and Ricciardo all jumped Albon as the Red Bull fell to 7th. Raikkonen had overtaken Russell for P10, but the Williams quickly got him back two laps later.

Ferrari’s lack of pace got brutally exposed as Leclerc got swallowed up by Stroll, Ricciardo, Albon and Perez on four consecutive laps. The Monegasque pitted early as his softs fell away.

After everyone had made a stop, Hamilton led from Bottas, Ricciardo, Stroll, Albon, Perez, Norris, Leclerc, Kvyat and Russell. Ricciardo was the big winner as he undercut Stroll to take P3.

Leclerc pitted for a second time with 21 laps to go which dropped him back to P11, behind his teammate Sebastian Vettel.

A safety car was deployed for the second time on lap 44 as Lance Stroll crashed out heavily at turn 9. The Canadian reported on the radio he had a puncture on the radio. Due to the nature of the accident and damage to the barriers, the race was red-flagged once again.

When they got going, Ricciardo jumped Bottas to take 2nd, but the Finn strolled passed him a lap later. Raikkonen and Grosjean got stunning starts to climb up to P8 and P9, but the Alfa Romeo driver got hit with a penalty for entering the pits incorrectly.

Leclerc, Vettel and Russell all cruised past Grosjean with DRS as the Haas fell out of the points-paying positions.

Alex Albon overtook Ricciardo for P3 with 9 laps to go to take the final step of the podium away from the Australian. 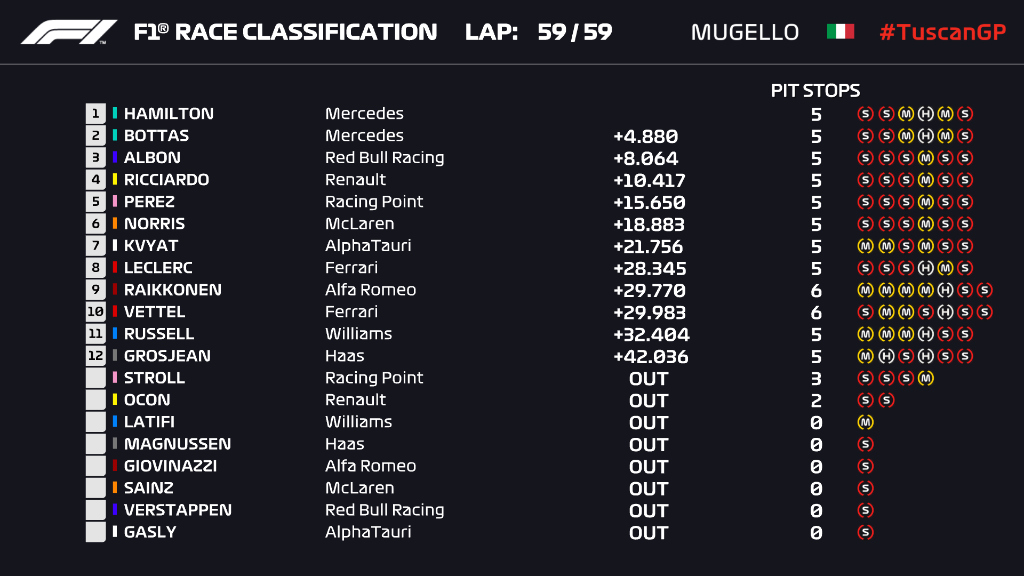