Off the line, Bottas just held his lead as he fended Hamilton off in turns 1 and 2. Verstappen, Leclerc, Ricciardo, Albon, Norris, Perez, Ocon and Sainz completed the top 10 at the end of the opening lap.

Antonio Giovinazzi and Nico Hulkenberg were the biggest winners of the first lap as they both gained three places. Vettel, the AlphaTauris and Grosjean all dropped places as they started on the medium compound.

Alex Albon pitted on lap 7 as a big lock-up on the opening lap hurt his left front tyre.

Daniel Ricciardo finally overtook Charles Leclerc for 4th on lap 9 as the Australian went around the outside of the Ferrari at turn 2. Leclerc pitted two laps later for mediums and rejoined behind Albon.

At the same time, Sebastian Vettel spun whilst trying to pass Antonio Giovinazzi into turn 1 after trying to switch to the outside line.

Seb half-spins at the first corner, and duly comes in to pit#EifelGP 🇩🇪 #F1 pic.twitter.com/7flu4vN9q9

Hamilton flies past Bottas and into the lead! The Finn locked up into Turn 1, and pits for fresh tyres#EifelGP 🇩🇪 #F1 pic.twitter.com/sy9O72Keii

There was more drama in turn 1 moments later as Raikkonen clattered into Russell and left the Williams with terminal damage. The Finn was hit with a 10-second time penalty for the incident.

A VSC was deployed to clear the Brit’s car which allowed Hamilton and Verstappen to pit and retain P1 and P2.

A crazy race continued as Albon broke Kvyat’s front wing into the final corner. He should have easily made the move as the Russian missed the last chicane but cut across the front of the AlphaTauri. The Thai was given a 5-second penalty but didn’t serve it as he retired on lap 25.

Kvyat and Albon come together, and the AlphaTauri racer loses his front wing 😱 He has a whole lap to run to get back#EifelGP 🇩🇪 #F1 pic.twitter.com/HJoiEzxtaT

Problems struck for title contender Valtteri Bottas as he lost power and retired on lap 19. He was joined in the DNF club as the Frenchman retired four laps later as he lost drive in the Renault.

We lose our second driver from the race, as Bottas retires in the pits#EifelGP 🇩🇪 #F1 pic.twitter.com/MvxXUhqqNx

The midfield runners who didn’t pit under the VSC came in around the halfway point. Norris, Perez and Sainz all boxed. The order was Hamilton, Verstappen, Ricciardo, Leclerc, Norris, Perez, Gasly, Sainz, Giovinazzi and Vettel.

However, problems hit Lando Norris as he complained about losing power for a number of laps and got swallowed up by Perez and Sainz.

After a couple of unsuccessful attempts at passing Leclerc, Sergio Perez finally made his move on lap 35 to take P4. Leclerc pitted for the second time a lap later and rejoined in 10th.

The Monegasque driver started to come back through the field and overtook both Raikkonen and Vettel to be P7.

Hamilton, Verstappen, Ricciardo, Perez, Sainz, Norris, Leclerc, Vettel, Gasly and Hulkenberg from the back of the grid was the top 10 with 20 laps to go.

Vettel’s old hard tyres started to off as Gasly and Hulkenberg cruised past the Ferrari driver at his home race. He pitted for softs on lap 43 and rejoined in P15.

Norris’ race came to an end on lap 44 from P6 as his car eventually gave up on him. The Safety Car was deployed as they had to clear the McLaren.

Lando Norris retires after battling car troubles for the majority of the race#EifelGP 🇩🇪 #F1 pic.twitter.com/jWVVH92TuJ

Hamilton, Verstappen, Ricciardo, Perez, Sainz, Leclerc, Grosjean, Gasly, Hulkenberg and Giovinazzi was the top 10 ahead of the restart.

Hamilton made the perfect start as Verstappen managed to fend off Ricciardo. Gasly and Hulkenberg immediately got through on Grosjean as the Frenchman struggled on the hard tyres. Gasly also picked off Leclerc for P6.

Hamilton cruised home to victory from Verstappen as he joined Michael Schumacher on 91 victories in Formula 1. Daniel Ricciardo held off Sergio Perez for 3rd as he scored his first podium since Monaco 2018. 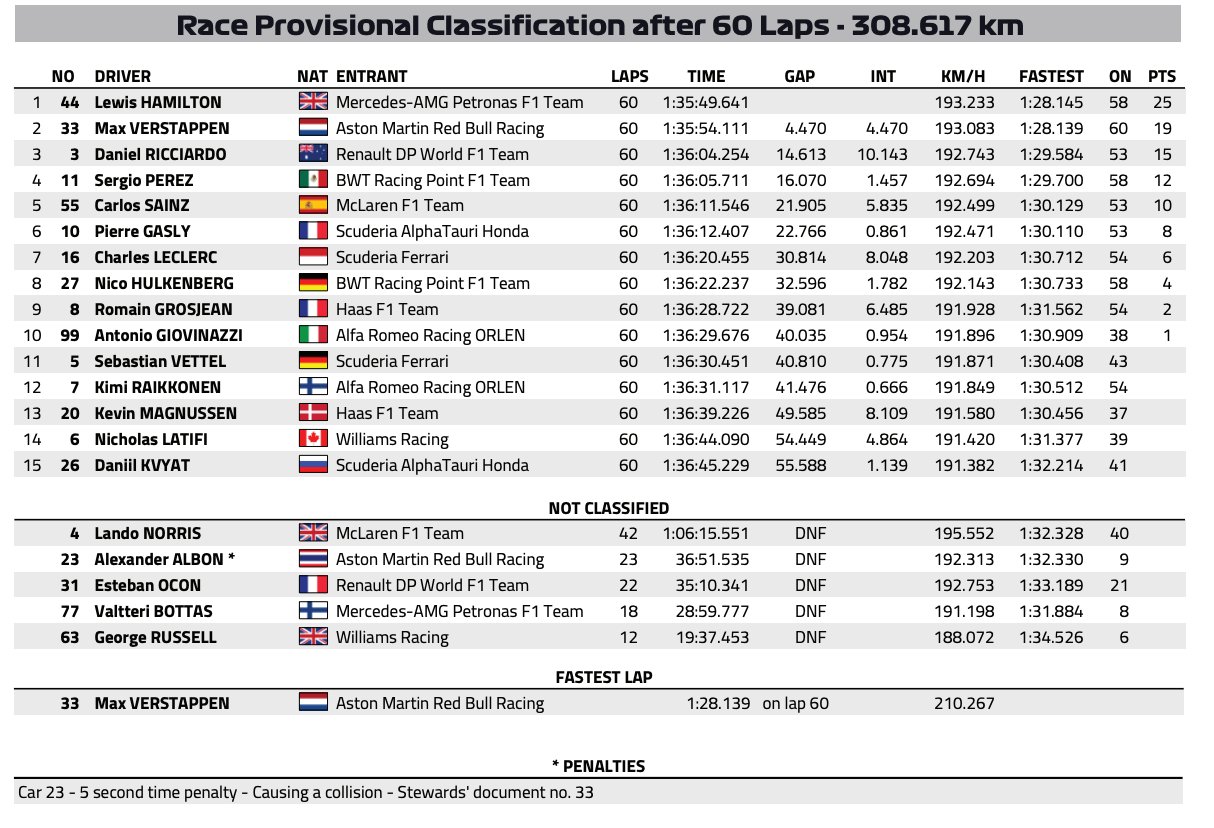 F1 | British GP | Norris not fully satisfied with his P6