When the race got underway, Bottas led away as Verstappen jumped Hamilton. Ricciardo and Leclerc both gained a spot, with Gasly and Albon losing out. Giovinazzi had another stunning first lap to move up to P14 from P20 on the grid.

Lance Stroll pitted at the end of the opening lap as he touched Esteban Ocon. Kevin Magnussen also spun as Sebastian Vettel turned the Dane around.

Pierre Gasly’s race came to an end on lap 9 as the team retired the car before the engine blew up. Bottas, Verstappen, Hamilton, Ricciardo, Leclerc, Albon, Kvyat, Sainz, Norris and Perez was the top 10 following the Frenchman’s retirement.

After such a promising weekend, horrible luck for Gasly and his race is over on Lap 9 🙁#ImolaGP 🇮🇹 #F1 pic.twitter.com/canq6zTfiD

Most of the midfield runners pitted on laps 14 and 15, but Ricciardo stayed in front of Leclerc, Albon, Kvyat, Sainz and Norris.

Verstappen boxed on lap 19, followed by Bottas a lap later. The Finn stayed in front of the Dutchman, with Hamilton extending his first stint.

Daniel Ricciardo and Charles Leclerc both overtook Kevin Magnussen on lap 27, but they were jumped by Sergio Perez as the Mexican took full advantage of his rivals getting stuck behind the Haas.

Esteban Ocon pulled off on lap 29 because of a clutch problem. A VSC was deployed which allowed Hamilton to pit and he jumped both Bottas and Verstappen to take the lead. Vettel, Raikkonen, Latifi, Perez, Ricciardo, Leclerc and Albon completed the top 10 at that point.

Mercedes told Bottas after Hamilton’s stop that he had damage that he picked up on lap two; the Finn was left with floor damage and lost downforce.

Sebastian Vettel finally pitted on lap 40 but had a terrible stop that lasted 13.1s. He rejoined in 14th place. Raikkonen eventually followed on lap 49 and came out just in front of the German.

Bottas made a mistake at Rivazza 1 and it allowed Max Verstappen to get through with DRS to take 2nd place.

Max finally gets his man - after a patient pursuit he takes P2 from Bottas with 20 laps remaining 👋#ImolaGP 🇮🇹 #F1 pic.twitter.com/fjIVwlsJSd

Max Verstappen’s race came to an end on lap 50 as a potential tyre failure pitched him into the gravel. The Safety Car was deployed. Amazingly, George Russell joined Max Verstappen in the DNF club as he crashed out behind it when running P10.

Max Verstappen is OUT of the race from P2 - tyre trouble brings his race to a dramatic end! 😬#ImolaGP 🇮🇹 #F1 pic.twitter.com/an7USVqyyi

More drama at Imola - and this time it's George Russell

Running behind the Safety Car, he hits the barriers 💥

"I don't know what to say" he tells the team over the radio 😬#ImolaGP 🇮🇹 #F1 pic.twitter.com/PMCv0wQrXE

Lance Stroll hit his front mechanic as the drama continued in the closing stages of the Grand Prix.

The Mercedes’ and Sergio Perez pitted behind the Safety Car. Whilst the Mercedes stayed 1-2, Perez dropped to P6. Ricciardo, Leclerc and Albon all gained a spot. Kvyat, Sainz, Norris and Raikkonen rounded out the top 10 ahead of the restart.

Daniil Kvyat had an absolutely stunning restart as he passed Perez, Albon and Leclerc to move into 4th. Alex Albon spun on the exit of T6 to drop to the rear of the field. It elevated Giovinazzi into the points.

Disaster for Alex Albon after the restart - he collides with Carlos Sainz and drops back to P15 💥#ImolaGP 🇮🇹 #F1 pic.twitter.com/sAiFjVy8z1

Despite getting close, Kvyat and Perez couldn’t pass Ricciardo and Leclerc respectively.

Out front, Hamilton eased to his 93rd victory from Bottas, as Daniel Ricciardo scored his second podium in three races. 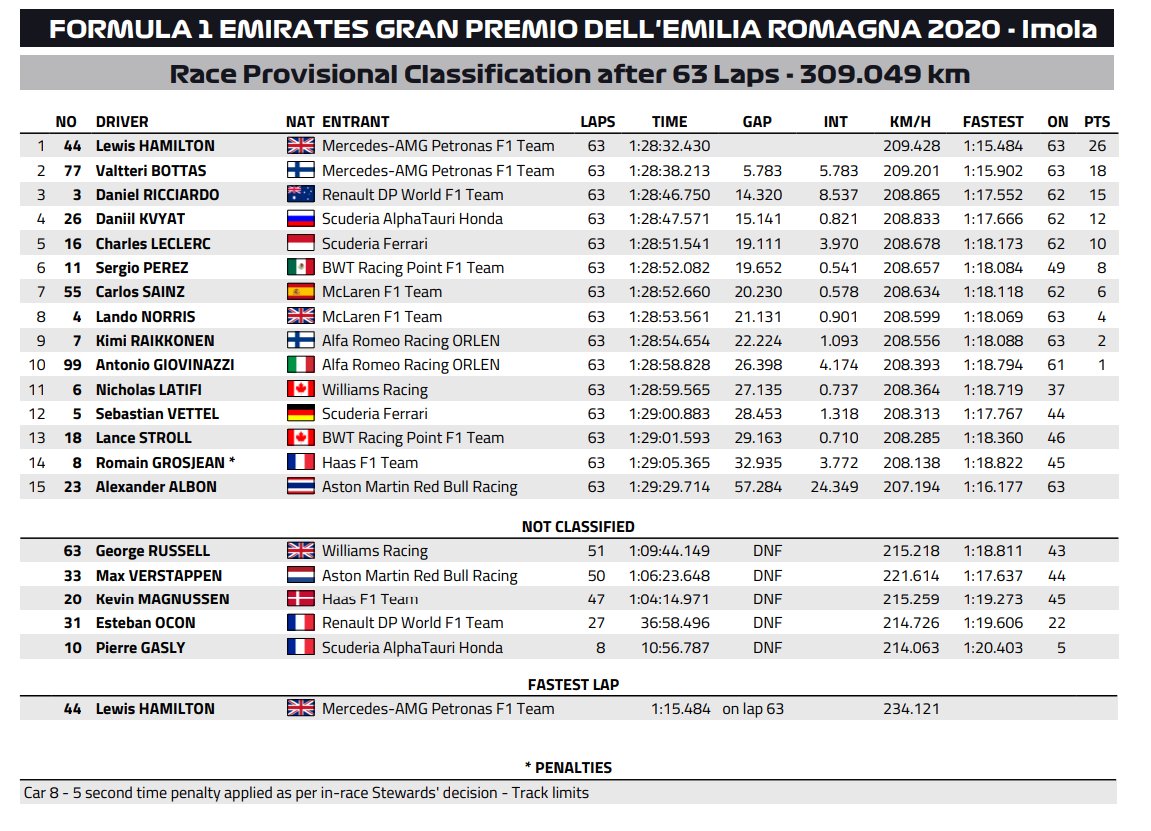 F1 | Hamilton on Vettel's commitments on and off track: "I really hope he inspires the next generation, he is rare"

F1 | Hamilton on Vettel's commitments on and off ...