The drivers went on a mix of inters and wets as the new track surface caused a dilemma for all the teams.

Max Verstappen showed how difficult it was immediately as the Dutchman spun on the intermediate compound before he even started his first flying lap.

Lando Norris set a 2:07.947 as the Brit posted the first time in his McLaren. That was soon beaten by Valtteri Bottas in the Mercedes as the Finn put his rallying skills to good use.

Esteban Ocon took over at the top in his Renault with a 2:06.115 before the session was red-flagged with 6:55 to go due to worsening conditions.

The rain got much heavier as qualifying began; a number of cars were spinning and going off everywhere in extremely difficult conditions.

Verstappen in P15 and Leclerc P16 found themselves towards the bottom of the charts at that point.

Following an almost 50-minute delay, the session began. However, the red flags were quickly back out as Romain Grosjean end up beached in the gravel at T1. Before that, Raikkonen spun and Leclerc also went off at T1 but they both managed to continue.

On the second restart, Verstappen found a massive amount of time and leaped up to the top of the charts in his Red Bull, 1.9s ahead of teammate Albon. Raikkonen, Vettel, Leclerc, Gasly and Ricciardo also found huge improvements to safely make it through. Ocon, Bottas, Norris, Giovinazzi, Stroll, Sainz, Hamilton and Perez also made it through.

The stewards said they will be investigating all the times set under yellow flags at the end of the session due to Latifi ending up in the gravel at the exit of T8 and a spin for Daniil Kvyat.

Magnussen, Kvyat, Russell, Grosjean and Latifi got knocked out.

Max Verstappen did a 1:57.125 to be the fastest driver after the first attempts, with Perez and Stroll following in the Racing Points.

The times continued to tumble but Max Verstappen remained at the top as the Dutchman lowered the benchmark to a 1:52.036, followed by Bottas and Hamilton. Albon, Perez, Stroll, Raikkonen, Ricciardo, Giovinazzi and Ocon was the top 10 before the final attempts began.

Norris, Vettel, Sainz, Leclerc and Gasly got bumped out as conditions improved massively in the middle segment of qualifying. Vettel and Leclerc ended up 4.8s and 6.4s off the quickest time of Verstappen respectively as Ferrari had absolutely no pace in the wet.

It was a mix of inters and wets once again at the start of Q3 as the Racing Point cars made a great call to go with the intermediates.

Sergio Perez logged a 1:52.037 initially to be quickest from Verstappen and Raikkonen with three minutes to go. Stroll, Ricciardo, Bottas, Albon, Hamilton, Giovinazzi and Ocon completed the order before the final attempts.

Lance Stroll timed it absolutely perfectly to steal pole position right at the end of the session with a 1:47.765, 0.290s in front of Max Verstappen as the Dutchman couldn’t find the grip on the inters that he had on the wets. Sergio Perez sealed a memorable day for Racing Point as he qualified 3rd. 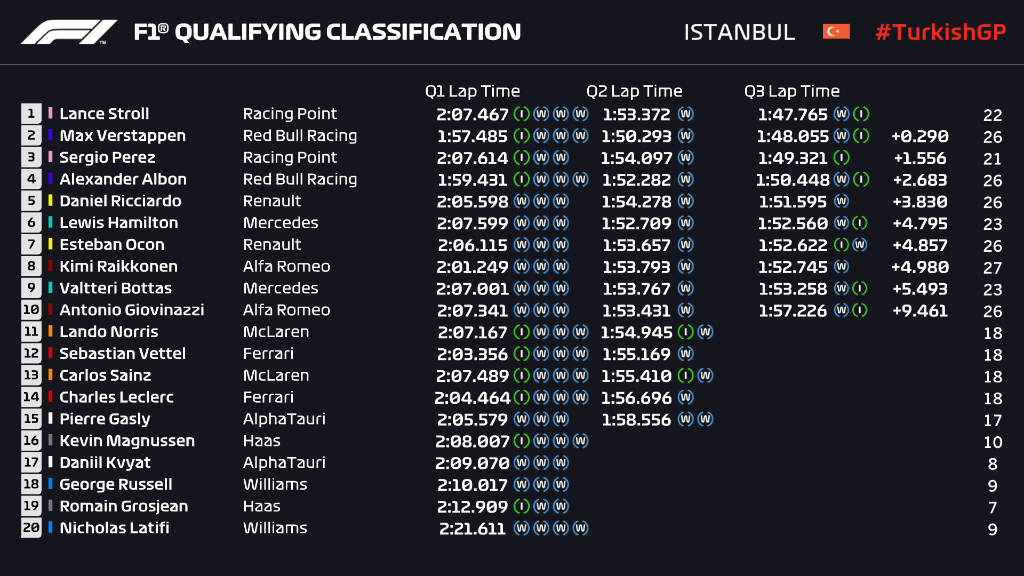 F1 | Emilia Romagna GP | Robson: ‘Deeply frustrating’ for Williams to not come away with points from Imola