There was a scare for F1’s newest pole-sitter Lance Stroll as he was ordered to see the stewards following qualifying.

The panel investigated the Canadian for potentially speeding under a single yellow flag after teammate Sergio Perez spun towards the end of the final part of qualifying. However, the telemetry had shown he slowed sufficiently and kept his pole position.

"The Stewards heard from the driver of Car 18 (Lance Stroll), the team representative and reviewed video, telemetry and marshalling system evidence. Car 18 approached turn 7 with a single yellow flag showing for the sector due to Car 11 (Sergio Perez) off track on the outside of the corner. By telemetry, Car 18 clearly came off the throttle, coasted into the corner, and then accelerated when clear of the incident. Sector times do not clearly show this as the track was rapidly drying and each lap was quicker than the preceding lap."

It was a difficult day for McLaren as they struggled in the wet conditions and it didn’t get any better following the session.

Lando Norris, who had qualified 11th, was hit with a five-place grid penalty for Sunday’s race as the Brit set his best time of the session while double waved yellow flags were being waved at the end of Q1; they were out because Nicholas Latifi had spun and got stuck in the gravel trap on the exit of turn 8 at the end of Q1.

"The Stewards heard from the driver of Car 4 (Lando Norris), the team representative and have reviewed video, radio, telemetry and marshalling system evidence. Car 4 approached turn 8 which was under double waved yellow flags for Car 6 (Nicholas Latifi). Telemetry shows that Car 4 slowed in the sector and resumed speed after the incident. Car 4 then asked his team if he should abort the lap, but was told to stay out because of the rapidly changing track conditions. Car 4 completed the lap, which turned out to be his fastest lap of Q1. While the stewards acknowledge that Car 4 was not attempting to set a quick lap time, due to the changing track conditions he nevertheless did so and thereby breached the referenced regulations."

On the other side of the McLaren garage, Carlos Sainz got a three-place grid drop for impeding Sergio Perez in Q2. Sainz will start from P15, with Lando Norris setting off from 16th.

The Stewards heard from the driver of Car 11 (Sergio Perez), the driver of car 55 (Carlos Sainz) and both team representatives and have reviewed multiple angles of video evidence and radio calls to Car 55. Car 55 was exiting the pits as Car 11 passed through turn 1. Car 11 caught up to Car 55 in turn 2/3 and was unnecessarily impeded by Car 55 at that point and through several subsequent turns. While extraordinary track conditions clearly impacted the situation, radio communications from the team clearly warned Car 55 that Car 11 was behind him."

For the second time in the 2020 season, George Russell was given a five-place grid penalty for speeding under yellow flag conditions; he failed to back off enough when passing them at T3 due to the spinning AlphaTauri of Daniil Kvyat.

He was due to start at the back of the grid because of using extra elements outside his allotted amount for the season anyway.

"The Stewards heard from the driver of Car 63 (George Russell), the team representative and have reviewed video, telemetry and marshalling system evidence. Car 63 approached turn 2, which was under double yellow flags for Car 26 (Daniel Kvyat) who was spinning off track on the outside of the turn. While Car 63 made an attempt to slow when encountering the double yellow flags, in the opinion of the stewards he slowed insufficiently and did not have his car under full control as he approached and then passed Car 26. This lack of full control clearly breaches the regulations. The driver also set a meaningful lap time on this lap which in and of itself breaches the requirements set out by the Race Director’s notes." 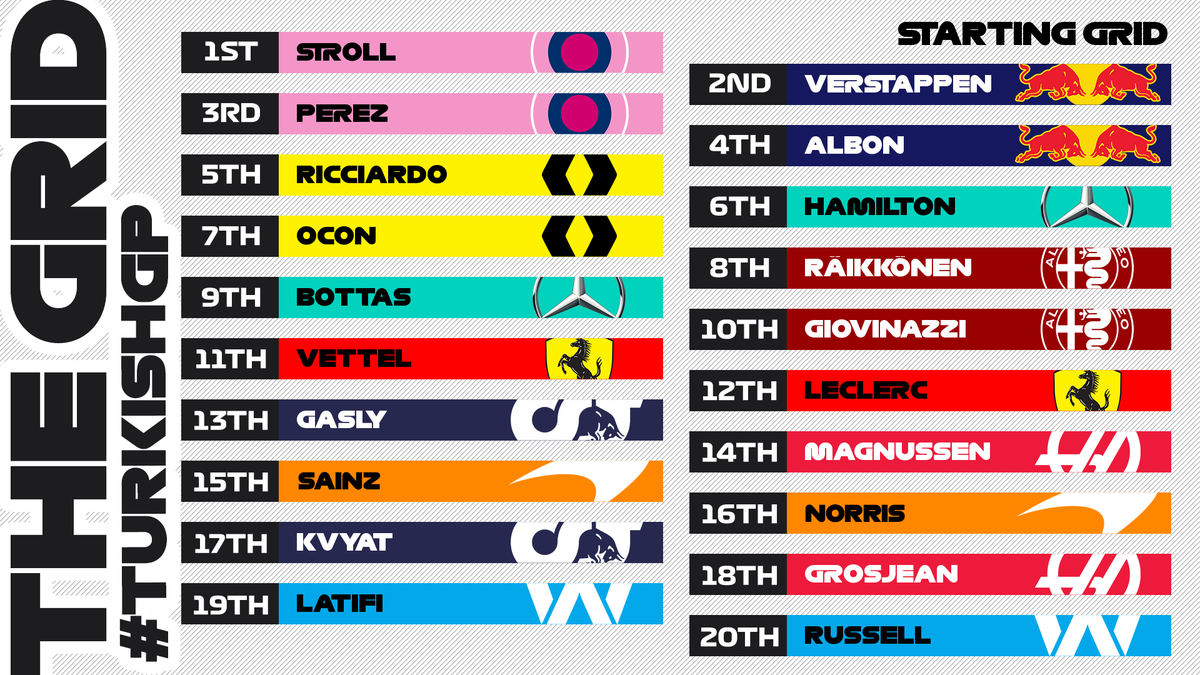