When the five red lights went out, Hamilton made a perfect start as he led Verstappen and Perez. Albon and Ricciardo also jumped Bottas in the Mercedes as the Finn got a terrible start and fell too P6. Antonio Giovinazzi had another storming start to move up from 16th to 11th.

Lando Norris was left with a damaged front wing after contact with Esteban Ocon at turn 2.

However, all that was overshadowed by an absolutely terrible accident for Romain Grosjean in the Haas. The Frenchman hit a barrier at high speed; his car broke into half and ended up in flames. Incredibly, the 34-year-old got out of the car as the halo and the remarkable safety improvements in recent times meant he survived.

Grosjean was taken to hospital with possible broken ribs and small burns on his hands and ankles.

STEINER: "Romain is doing okay, I don't want to make a medical comment but he had light burns on his hands and ankles. Obviously he's shaken... I want to thank the rescue crews who are very quick. The marshals and FIA people they did a great job, it was scary"#BahrainGP 🇧🇭 pic.twitter.com/lWbZd17ynw

That was frightening to see but we’re glad to see Romain walk out of the Medical Car.

Thank you for all your messages 🙏 pic.twitter.com/CXnQXI0ioF

I'm so grateful Romain is safe. Wow... the risk we take is no joke, for those of you out there that forget that we put our life on the line for this sport and for what we love to do. Thankful to the FIA for the massive strides we've taken for Romain to walk away from that safely https://t.co/dG8AXmsbKN

Following a delay of over an hour, the top 10 for the standing restart was Hamilton, Verstappen, Perez, Bottas, Albon, Ricciardo, Norris, Ocon, Gasly and Vettel.

Norris and Leclerc both gained massively on the restart to move up to 5th and 7th.

There was another scary moment at T8 as contact between Kvyat and Stroll sent the Racing Point rolling over and his race was done. The Safety Car was deployed immediately. Kvyat was given a 10-second penalty for the incident.

Valtteri Bottas picked up a puncture after picking up debris following the standing restart and was forced to pit. The Finn dropped to P16.

Hamilton, Verstappen, Perez, Albon, Norris, Ocon, Leclerc, Ricciardo, Gasly and Sainz was the top 10 when the Safety Car came in on lap 8.

Ocon and Leclerc had a terrific fight into turn 1, but Ocon fended off the Ferrari. Sainz nailed Gasly and Ricciardo as he took full advantage of his soft compound tyres. The Spaniard continued his charge as he nailed Leclerc into T1.

Leclerc continued to fall backwards as Ricciardo and Gasly followed Sainz through.

First Sainz, then Ricciardo get past Leclerc

Bottas struggled to make his way through the pack and could only pass Latifi and Vettel before drivers in front started to pit.

Renault triggered the first round of stops as Ricciardo and Ocon boxed. Hamilton, Verstappen, Perez, Albon, Norris and Sainz all pitted by lap 21.

The top 10 was Hamilton, Verstappen, Gasly, Perez, Albon, Leclerc, Bottas, Norris, Ocon and Ricciardo after everyone apart from Gasly and Leclerc had pitted.

Sainz on mediums breezed by Ricciardo on lap 26 and Ocon a lap later to move himself up to P6, which was helped by the stops of Bottas, Leclerc and Gasly.

With Norris currently P5, these could be crucial points for McLaren in the battle for third in the constructors' title race #BahrainGP 🇧🇭 #F1 pic.twitter.com/3SQhLrOKl3

Bottas, who rejoined P14 following his second stop, cleared Kvyat, Russell, Magnussen and Leclerc to be P10 by lap 32.

Bottas gets past Leclerc and is up to P10

The Finn is having another difficult Sunday after suffering a puncture at the restart and dropping down the placings#BahrainGP 🇧🇭 #F1 pic.twitter.com/LwpHbOwlro

Red Bull tried to undercut Hamilton and Perez with their drivers respectively, but they didn’t pull it off.

The running order was Hamilton, Verstappen, Perez, Albon, Gasly, Norris, Sainz, Ricciardo, Ocon and Bottas with fifteen laps to go. Norris and Sainz both cleared Gasly in the closing stages as the Frenchman was on much older tyres.

Heartbreak came for Sergio Perez with just three laps to go as his engine gave up with a massive engine failure whilst running in a comfortable P3. It allowed Alex Albon to get his second career podium.

Most importantly, however, is that Romain Grosjean walked away from a horrifying accident. 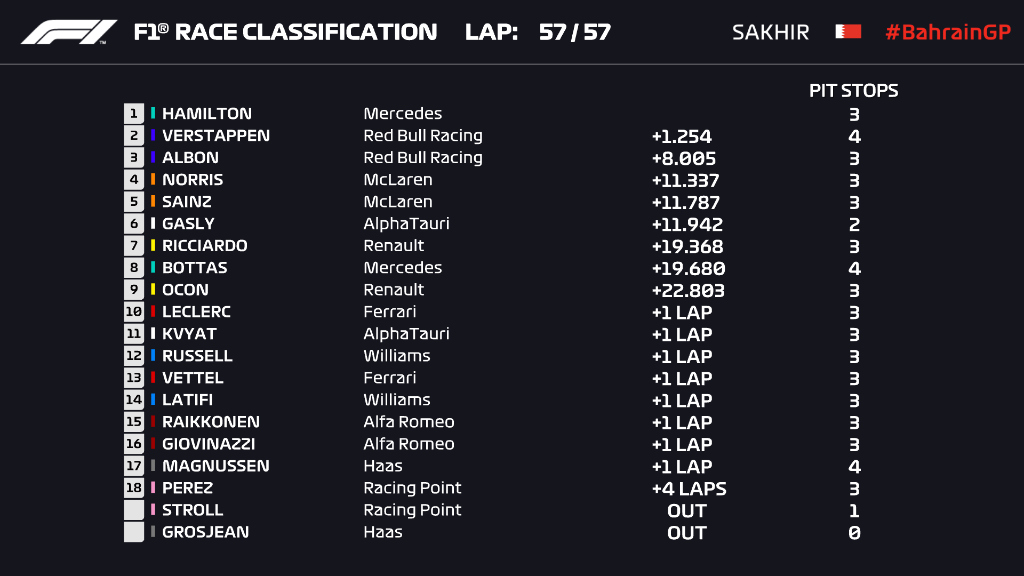