Following a disappointing qualifying for Lando Norris where he ended up P15, McLaren decided to put a new engine and turbocharger in and the Brit started from the back of the grid with Pietro Fittipaldi.

When the five red lights went out, George Russell made a superb start to take the lead from Bottas.

Heading up into T4, Leclerc hit Perez and the Ferrari driver broke his suspension. Verstappen tried to avoid it but went through the gravel and into the barrier at slow speed. Amazingly Perez could continue and dropped to the back. The Safety Car was deployed.

The chaos allowed Carlos Sainz to move up to P3, with Ricciardo, Kvyat and Stroll completing the top 6. Lando Norris had a superb start to make up ten places to be P9.

On the restart, Perez quickly made gains and moved past seven drivers to climb up to P11 by lap 15. Russell, Bottas, Sainz, Ricciardo, Kvyat, Stroll, Gasly, Ocon, Norris and Albon was the top 10 at that point.

Norris started to struggle on the soft tyres and got gobbled up by both Albon and Perez on lap 20. Perez then made a beautiful move on the Thai a lap later around the outside of T4 to move up to 9th.

AlphaTauri got the undercut spot on as Daniil Kvyat jumped Daniel Ricciardo as they rejoined P8 and P9 following their stops. Sainz stayed ahead as Stroll, Ocon and Albon stayed out. Perez’s early stop left him up in P5.

Renaults undercut with Ocon paid off handsomely as he jumped Lance Stroll after their stops.

George Russell pitted on lap 46, followed by Bottas four laps later. The Brit retained his lead and extended it to 8s. After Perez and Albon pitted again on lap 48, Sainz regained P3. Kvyat, Ricciardo, Gasly, Ocon, Stroll, Perez and Norris completed the top 10 at that point.

Kvyat and Gasly pitted on laps 52 and 54 as the AlphaTauris pitted. It left him in P9 and P10.

Nicholas Latifi pulled off and it brought out a VSC on lap 56.

Just as it ended, Sainz and Ricciardo pitted. They dropped to 7th and 8th, with Ocon taking 3rd. However, that didn’t last long as Perez overtook teammate Stroll and the Frenchman on laps 57 and 58 to take P3.

Perez powers past Stroll and then gets past Ocon 💪

For the second weekend in a row he's running in P3 #SakhirGP 🇧🇭 #F1 pic.twitter.com/0otz0xf1Xl

Jack Aitken crashed and his front wing fell off. The wing was on the track and it forced the race director to deploy the Safety Car.

It all went wrong for Mercedes as they put a mixed tyre set on Russell’s car when he boxed and he had to pit again. Bottas then had a shocking 27.4s stop.

Mercedes call both drivers into the pits for new tyres but there's a problem putting on Bottas' fresh set #SakhirGP 🇧🇭 #F1 pic.twitter.com/sGC1KYFsBO

Russell started his charge through the field to overtake Bottas, Stroll and Ocon with 14 laps to go. It moved him up to P2 behind Sergio Perez.

Albon also made moves past the AlphaTauris on the restart to move into 8th.

Valtteri Bottas was left brutally exposed on the hard tyre as he got overtaken by Sainz, Ricciardo, Albon and Kvyat.

Bottas has no grip and is dropping down the order - the Finn is now P8 #SakhirGP 🇧🇭 #F1 pic.twitter.com/rmLcevRc8V

More cruel luck hit George Russell with ten laps to go as a slow puncture forced him to pit once again and it left him down in P15 when he rejoined. The Brit didn’t give up and overtook Magnussen, the Alfas, Vettel, Gasly and Norris to recover to P9.

📻 "Aaggghhhh!" cries Russell over the radio

Sergio Perez drove an absolutely perfect race to take a remarkable first win after getting taken out on lap one by Charles Leclerc. Esteban Ocon and Lance Stroll completed the podium positions after Mercedes shot themselves in the foot. 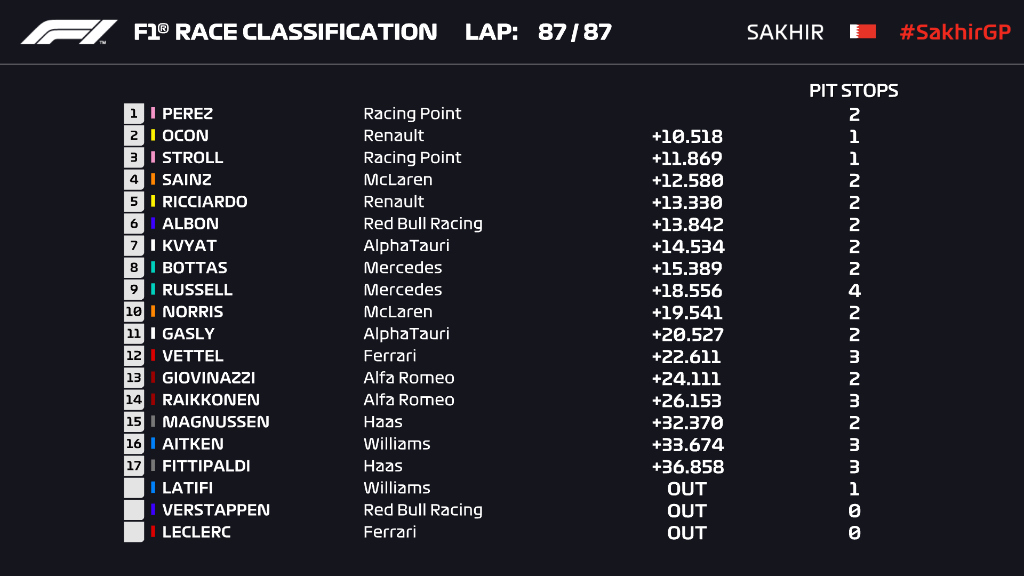 F1 | Frederic Vasseur on Andretti talks: “It was a distraction for me.”

F1 | McLaren Technical Director Key thinks we'll see some “very different cars” this year, and that their development will be consistent throughout the season