Heading into qualifying, Kevin Magnussen and Sergio Perez knew they would start at the back of the grid because of power unit penalties.

Kevin Magnussen logged the first time of qualifying in the Haas on a 1:38.086, with teammate Fittipaldi 0.087s behind.

Albon did the first proper flier of the big runners with a 1:36.106, but that was soon beaten by Valtteri Bottas on a 1:35.699. Hamilton’s first lap was cancelled due to exceeding track limits at turn 20. His deleted time was just under a tenth behind his Finnish teammate. Hamilton’s first legal time of the session put him P8.

Bottas, Verstappen, Perez, Albon and Stroll was the top 5 with five minutes remaining in the session. Magnussen, Fittipaldi, Russell, Latifi and Giovinazzi found themselves in the knockout zone ahead of the final runs. Like Hamilton, the Italian had his time deleted for track limits.

Hamilton went again on new tyres and went to the top of the times. Charles Leclerc did an excellent lap to move up to P3. Antonio Giovinazzi was the biggest winner on the final runs as he climbed up from last to P15 and got himself through to Q2 by over 0.4s.

Raikkonen, Magnussen, Russell, Fittipaldi and Latifi got knocked out. The Canadian’s final attempt never happened as he spun in the final corner as he prepared to start the lap.

Hamilton on the mediums banged in the first time of the session with a 1:35.466, 0.061s ahead of Bottas. Hamilton’s lap remained quickest at the end of Q2.

Norris on the softs followed initially, +0.383s away from his fellow Brit. Sainz, Verstappen and Gasly completed the top 6 following the first attempts. Leclerc, Kvyat, Stroll, Vettel completed the top 10 at that point.

Alex Albon and Daniel Ricciardo, both on mediums, had their times deleted because of track limits in the last couple of corners. Ocon, Giovinazzi, Albon, Ricciardo and Perez were in the relegation zone ahead of the final fliers. Unsurprisingly, Perez didn’t decide to set a time in Q2 because of his grid penalty.

The times tumbled in the dying moments as Verstappen and Leclerc moved up to P3 and P6 on the medium tyres. The Mercedes’, Albon, Norris, Stroll, Sainz, Kvyat and Gasly all made it through as well.

Ocon, Ricciardo, Vettel, Giovinazzi, Perez dropped out. Ocon finally outqualified his teammate in the dry in 2020, by a mere 0.047s.

The big guns soon flexed their muscles as Mercedes and Red Bull were closely matched on the first attempts. Bottas clocked the quickest time, 0.1s ahead of Verstappen, Hamilton and Albon. Sainz and Norris annexed the third row.

Stroll, Leclerc, Kvyat and Gasly rounded out the order ahead of the final flying laps of qualifying in 2020.

Norris put in a cracking performance to be 4th for McLaren. Albon, Sainz, Kvyat, Stroll, Leclerc and Gasly completed the top 10 as just under a second covered all the drivers. 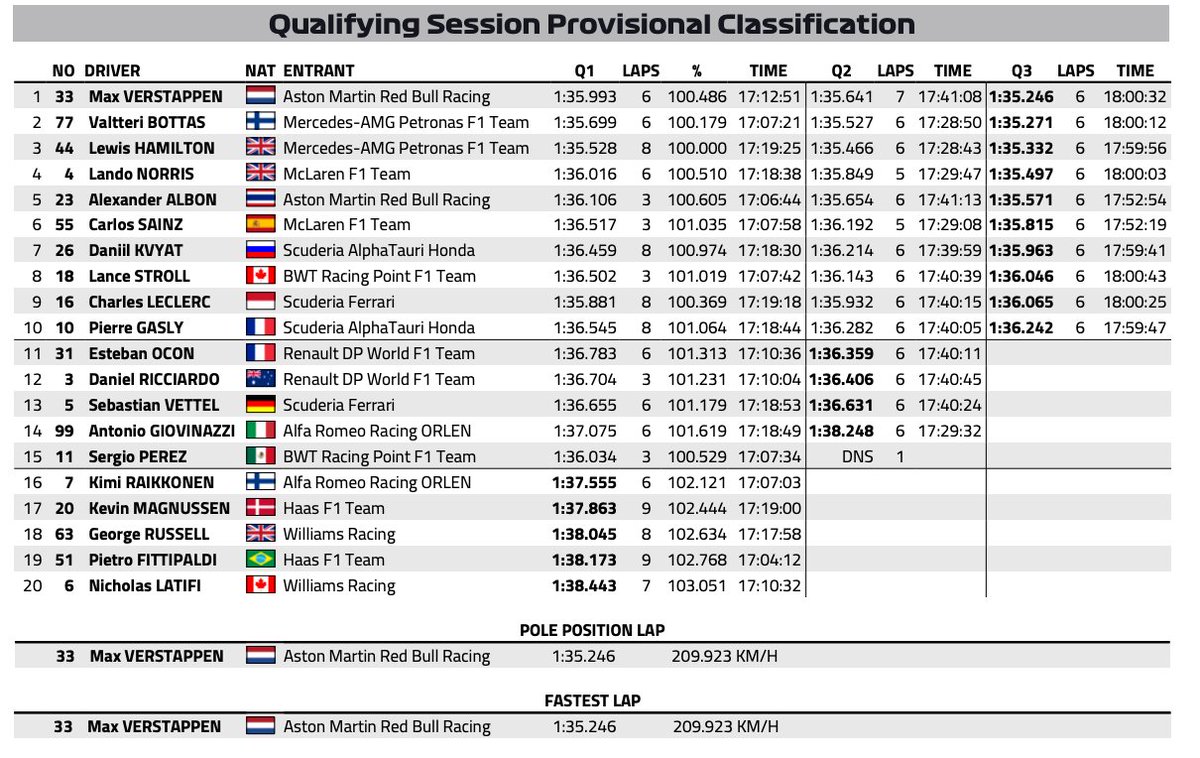