Off the line, Verstappen kept the lead from Bottas, Hamilton, Norris and Albon. Kevin Magnussen was the biggest winner on the opening lap as he jumped from P20 to P17.

After Ocon jumped Gasly on the opening lap, the AlphaTauri driver made a lovely move down the inside into turn 8 on the next tour.

Gasly slips past Ocon to climb up to ninth 💪#AbuDhabiGP 🇦🇪 #F1 pic.twitter.com/oueFcfjWt9

Alex Albon finally overtook Lando Norris in the McLaren for P4 on lap 6. At Renault, Ocon and Ricciardo swapped places for P10 and P11 as the Australian had superior pace on the hard tyre.

Daniil Kvyat started to fall backwards as Stroll and Gasly overtook him on consecutive laps.

Sergio Perez’s last race at Racing Point ended in heartbreak on lap 10 as his car packed in on him. A VSC was deployed and the main runners all pitted as Verstappen, Bottas, Hamilton and Albon all boxed for the hard tyres. It was upgraded to a Safety Car because they couldn’t move the Mexican’s car easily.

Perez is OUT with a mechanical issue 😭#AbuDhabiGP 🇦🇪 #F1 pic.twitter.com/uz927R7ZMK

Carlos Sainz quickly cleared the Ferraris of Vettel and Leclerc to move into 7th on lap 17. Leclerc continued to fall backwards as Stroll, Gasly and Ocon all passed him as well.

Verstappen, Bottas, Hamilton, Albon, Ricciardo, Norris, Sainz, Vettel, Stroll and Gasly was the top 10 at the halfway point. Gasly livened things up somewhat by overtaking Vettel and Stroll to move into P8.

Vettel pitted on lap 36 to switch to the mediums and rejoined in P15. Daniel Ricciardo finally boxed on the 40th tour and dropped behind the McLarens to be P7.

In what was a forgettable race, Verstappen comfortably won from Bottas and Hamilton. Alex Albon drove a strong Grand Prix, finishing P4.

McLaren sealed P3 in the Constructors’ Championship with Lando Norris and Carlos Sainz finishing P5 and P6 respectively. Ricciardo, Gasly, Ocon and Stroll rounded out the points scorers. Ocon overtook Stroll on the final lap to steal P9 for the Canadian. 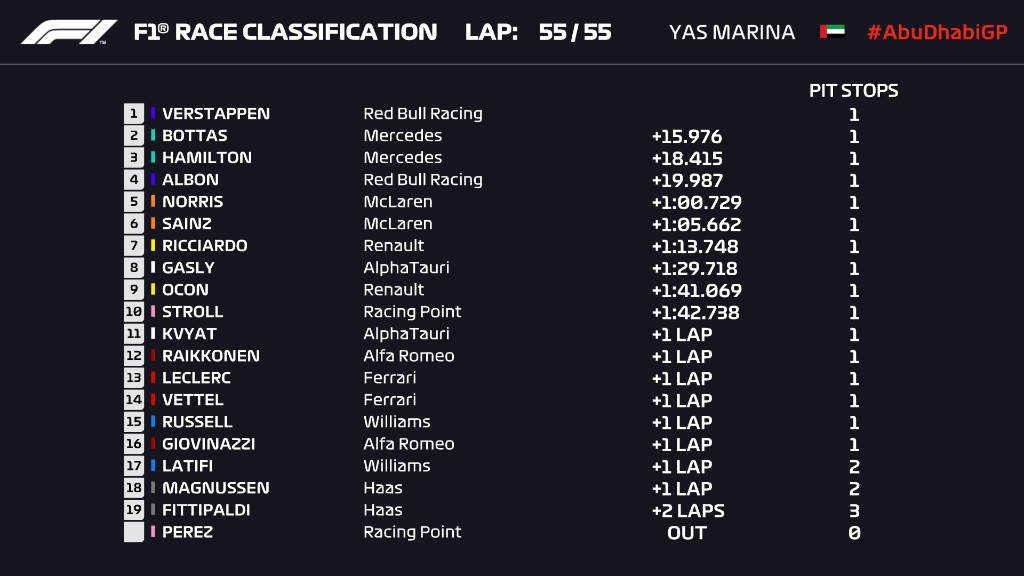 F1 | The target for the 2021 Season is to improve his Quali pace, says Latifi.