Fernando Alonso’s preparation ahead of his return to Formula 1 in 2021 started well as he topped the times in the post-season test at the Yas Marina circuit. The Spaniard logged a 1:36.333 on C5 tyres to be P1 at the end of the day; he completed 105 laps.

“It was good & very nice to be back in the car especially with the race team. I’ve been testing the 2018 car in preparation but this one felt a bit more serious and it ignited a little bit the competitive spirit.” - @alo_oficial

Wow it happened! That’s me in “a” Formula 1 car. Knew they were fast but there is simply nothing to compare it to. Very pleased with our day and performance. @MercedesAMGF1 thank you 🙏🏻 pic.twitter.com/DzFVKNSnyx

One-time Grand Prix winner Robert Kubica finished P4 as the Pole pumped in a 1:37.446 in the Alfa Romeo; he also put 89 laps in during his stint in the car.

AlphaTauri’s Yuki Tsunoda, set to be confirmed for the second seat at the team for 2021, clocked the fifth quickest time of today on a 1:37.557. He did 123 laps after a productive day for the Japanese driver who finished P3 in the FIA Formula 2 Championship this year.

Juri Vips, who looks likely to be in FIA Formula 2 come 2021, was P6 in the Red Bull as the Estonian was the lead driver to set his best lap on the C4 compound. He put 101 laps in. Sebastien Buemi also drove the Red Bull today and ended P12, 0.514s adrift of Vips.

Ferrari development driver Antonio Fuoco ended the day in 7th with a 1:37.817 after completing a whopping 126 laps.

The rest of the drivers all competed in Formula 2 this year. Callum Ilott led Zhou, Aitken, Shwartzman, Sato, Nissany and Schumacher.

Ilott was the fastest of the drivers who clocked their best time on the C5s, with Aitken outpacing Sato and Nissany on the C4s.

The 2020 season has come to an end following today's test. View the full classification below. 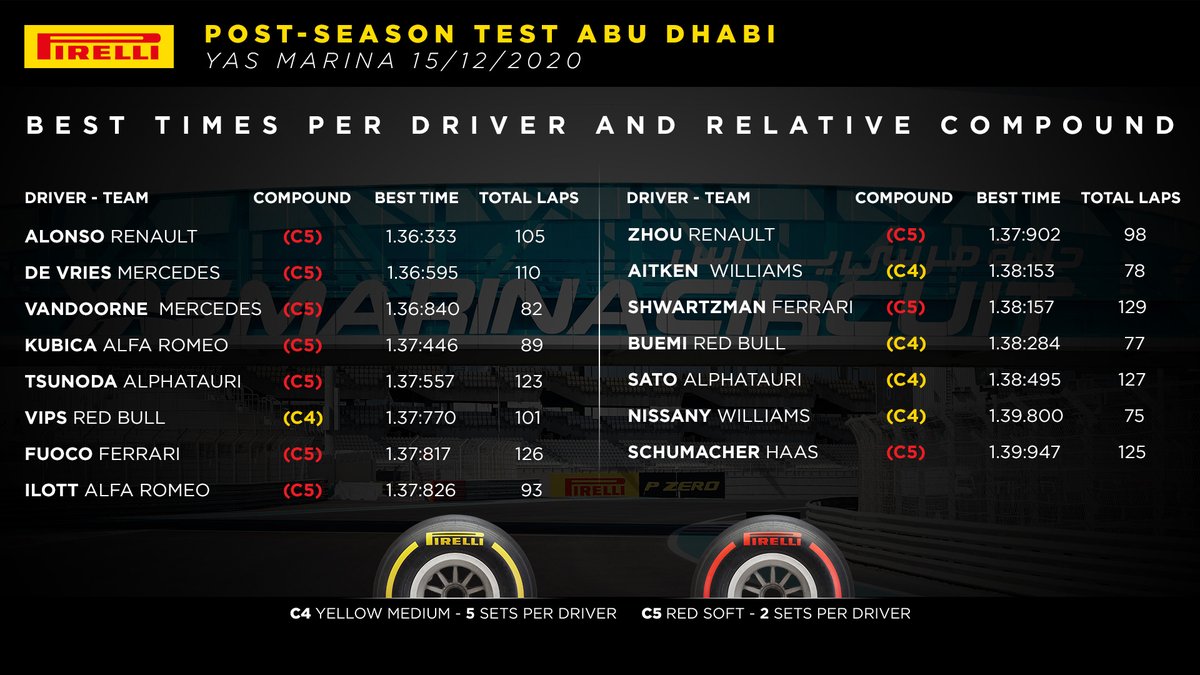 F1 | Porsche and Volkswagen on the possibility of entering F1

F1 | Porsche and Volkswagen on the possibility of ...

F1 | MIck Schumacher on his his surname and ...