The 2021 season is due to kick off at Albert Park in Melbourne on the 21st of March. However, with COVID-19 still severely affecting the world at the moment, RaceFans.net are reporting that the Australian Grand Prix will be postponed until a later date.

Putting that to one side, let’s have a look at how things are shaping up ahead of the new campaign.

All ten teams on the grid last year will remain on it when the 2021 campaign begins. However, there have been a couple of name changes.

Renault has been rebranded and they’ll be called the Alpine F1 Team. As for Racing Point, they’re now officially Aston Martin as the iconic British car brand returns to the sport as a team for the first time since 1960.

On the Power Unit side, McLaren are switching to the Mercedes PU for 2021. Red Bull and AlphaTauri are both heading into their final year with the Honda PU as the Japanese brand leaves the sport at the end of the season.

The field will look a lot different in 2021 vs 2020. Only three of the ten teams look set to retain the same driver line-up heading into the new season: Mercedes, Alfa Romeo and Williams. Confirmation of Lewis Hamilton’s new contract with Mercedes has yet to be announced.

2021 is set to be a record-breaking one with 23 races scheduled for this year. Round 4 is still TBC, but RaceFans.net reported earlier this week that Imola is favourite to host the event.

With question marks around Australia and the potential postponement of that race, you have to wonder how many races could end up getting postponed or cancelled due because of the virus.

One thing is for certain, however. There will be no race in Vietnam in 2021 after a key figure in promoting the race was arrested.

Saudi Arabia should be making its debut on the calendar at the penultimate race of the season. Zandvoort is also due to make its first appearance on the F1 circus since 1985 after the race was cancelled last year.

If the season goes ahead as normal, there’ll be two triple-headers in 2021 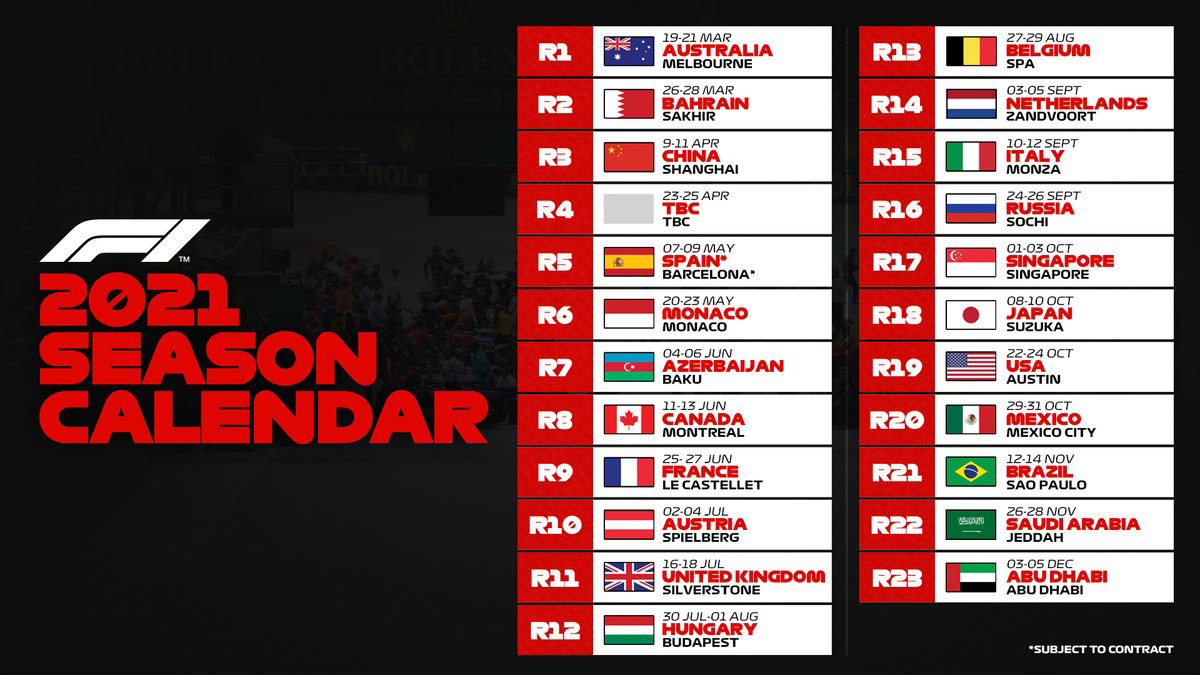 With the new technical regulations pushed back to 2022 because of the pandemic, teams will be limited on making changes to their 2020 cars for 2021. The ten teams are confined to a number of tokens to improve the biggest deficiencies on their cars.

Changes to the floor and other areas have also been introduced. The intention of these plans is to reduce the level of downforce on the 2021 cars.

As for pre-season testing, that has been reduced from six days to just three. It means the rookies won’t have much running ahead of their debuts, whether that be in Melbourne or somewhere else.

Finally, there will also be changes to FP1 and FP2. They’ve both been cut by 30 minutes and that means a 1-hour reduction on a Friday. The Saturday and Sunday formats remain unchanged.

F1 | ‘’No promises have been made’’ about future Mercedes drive, says Russell

F1 | Budkowski on the "shock" of Abiteboul leaving

F1 | Budkowski on the "shock" of Abiteboul leaving