The hype for the 2021 Formula 1 season is at its higher point now, and why wouldn’t it be? With Fernando Alonso’s return, the new Aston Martin journey, Red Bull's talented lineup, the start after a long-awaited announcement by Hamilton and Mercedes, plus three rookie drivers making the debut, including F2 champion Mick Schumacher, the year has definitely all the elements to be a one to remember.

The first pre-season test session was the one set to give cars the green light on track for the year. And it was one engulfed in windy and dusty conditions in the Bahrain desert, in Sakhir.

Daniel Ricciardo topped the standings with the fastest lap of 1:32.203 with Pierre Gasly as the runner-up and Max Verstappen coming in third, both within less than half of a cent away from the McLaren.

The AlphaTauri driver was the one with the most laps completed under his belt with 73 on the first testing session of the year.

Black-screens in front of the Mercedes garage in the pit-lane were shown when a problem with the transmission didn’t allow Valtteri Bottas to go out on track just when the session was less than an hour from the start. The World Champion team had to work upon some gearbox changes and the Finn could drive only half an hour in the AM with just 6 laps; he finished 10th in the session.

A similar situation was up in Haas’s garage as Mick Schumacher’s car presented a hydraulic issue and a new gearbox was a compulsory change as the German just completed 7 laps on track before his issue.

With the morning further underway, Vettel’s Aston Martin stopped at the end of the pitlane and was rolled out of the way by his mechanics. He came back on track for the last 30 minutes.

Finally, the session was red-flagged with just 10 minutes to go because of Ferrari’s Charles Leclerc mechanical issue that saw him stopping the car at turn 4, and consequently, ending the session.

While it is true that the preseason tests are the totally first glimpse of the performance from the drivers and teams for the first race of the championship, no hopes, despairs or deep analysis should be made just now. Daniel Ricciardo’s McLaren topping the standings means nothing, as well as Mercedes’s position, means even less.

It feels so good to be back. 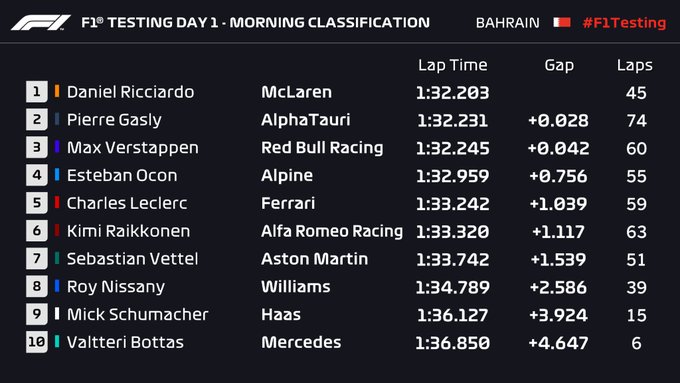 F1 | Norris about his teammate Daniel Ricciardo: "It is not up to me to help him to make him feel better"

F1 | Austria gets another double-header after the Turkish ...