A sandstorm during the lunch break in Bahrain left the circuit full of sand and it meant the drivers had almost no grip when the afternoon session got underway.

After an hour of the afternoon, Yuki Tsunoda was the fastest of the drivers who jumped into their cars for the PM session. Mazepin, Norris, Sainz and Giovinazzi were the other runners to post a time.

Lewis Hamilton finally appeared on track as the second hour begun but it was a drifting show for the Brit as he struggled to find any kind of grip in the W12. He also asked for his other pedals to be prepared during that run. Aston Martin were also late to join the circuit as Lance Stroll had to be patient to get some running in.

Rookie Nikita Mazepin spun in the Haas at T11 as he lost the car on corner entry. The Russian continued on his way following that moment. On his test debut for Ferrari, Carlos Sainz also had a spin at the same corner later in the session.

Red Bull’s Max Verstappen, using C2s, moved to the top of the times on a 1:31.412 in the second hour as track conditions slowly started to improve. Giovinazzi and Tsunoda vaulted up to P4 and P5 respectively, +1.003s and +1.315s off the Dutchman’s benchmark. Sainz also improved and beat Leclerc’s time from the morning by nearly 0.4s.

As the session headed into the third hour, Esteban Ocon on C4s made a sizeable improvement to go into P2, +0.214s adrift of Verstappen. Norris jumped up to P3 as he went faster than new teammate Daniel Ricciardo. Giovinazzi stayed P4 but lowered his time. Hamilton finally put in a decent time and went 9th.

The final hour saw a series of personal bests that changed the order. Max Verstappen’s 1:30.674 on C3s meant he finished top of the times at the end of the opening day. He also did the most laps with 139 on a productive day for Red Bull Racing.

After running towards the bottom of the times throughout the afternoon, Lance Stroll jumped up to P4 in the closing stages, with Carlos Sainz was 5th for Ferrari. Giovinazzi, Ricciardo, Gasly, Tsunoda and Hamilton rounded out the top 10.

Following reliability problems for Bottas in the morning, Hamilton massively struggled in the afternoon as he went off the track on multiple occasions as the dominant team of the V6 era didn’t have the greatest start to testing and 2021.

A big lock-up for Hamilton as the session comes to a close 👀#F1 #F1Testing pic.twitter.com/a5pK9kNlOo 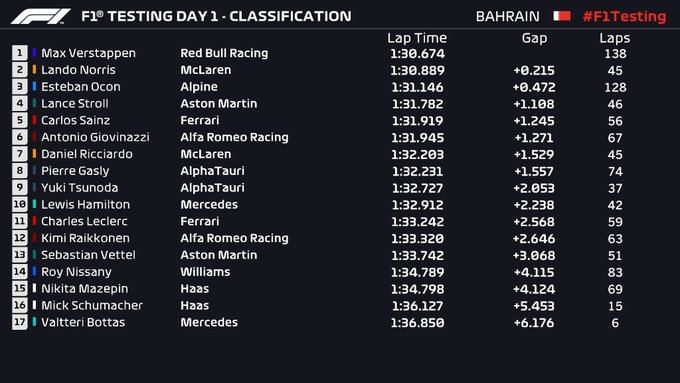 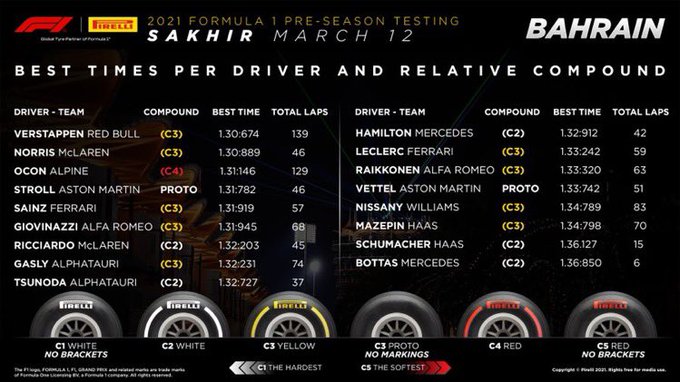