After a treble of fastest times in practice, the question that lingered in the paddock was whether Verstappen would make it a clean sweep of the timed sessions and grab only his fourth pole position in his Formula 1 career.

With the track and air temperatures falling and the wind picking up as the sun went down on the Bahrain International Circuit, the drivers would have their work cut out to keep their cars on the track for what looked set to be a gruelling qualifying session.

Nikita Mazepin continued his troublesome debut weekend with a spin at turn thirteen on his first push lap after locking his rear wheels causing Mazepin to return to the pitlane to replace his ruined first set of tires.

Mick Schumacher, in contrast, got his first lap under his belt with a 1:33.861 over three seconds down on Verstappen's first quick lap.

Yuki Tsunoda continued his good progress for Alpha Tauri with the second-fastest time in the early stages of Q1, with the Japanese rookie just over a tenth down on Verstappen.

Mazepin then continued to test his Haas's limits by spinning off at turn one, with his mistake bringing out the yellow flags and compromising Esteban Ocon and Sebastian Vettel's final push laps, causing both to be knocked out in Q1 along with both Haas's and Nicholas Latifi.

Carlos Sainz Jr had a brief scare when his Ferrari's power unit cut out midway through the exit of turn eight, with the Spaniard having to limp back to the pits in time for Q2.

Sergio Perez and Daniel Ricciardo had a difficult start to Q2 after seeing their first push laps deleted for a breach of track limits at turn four, with both going wide into the corner, invalidating their laps in the process.

Perez's mistake would ultimately cost him a spot in the top ten shoot-out, as the Mexican couldn't improve and would start a lowly eleventh ahead of Antonio Giovinazzi, Tsunoda, Kimi Raikkonen and George Russell, who once again produced yet another giant-killing lap to get the Williams to fifteenth.

Ferrari surprised the paddock with a 1-2 on the soft tires to top Q2, with Sainz Jr putting behind his previous issues to lead Charles Leclerc and Lewis Hamilton.

Verstappen continued his good form to lay down a benchmark with the fastest time on his first run of Q3, narrowly ahead of Hamilton and Pierre Gasly who produced a scintillating lap to go third fastest and over two tenths quicker than Valtteri Bottas.

Despite Hamilton's best efforts, Verstappen set three purple sectors to take pole by just under four-tenths to take pole position ahead of Hamilton and Bottas, with Leclerc snatching fourth at the session's end.

Gasly was fifth ahead of Ricciardo and Lando Norris, with Sainz starting alongside his former McLaren teammate in eighth. 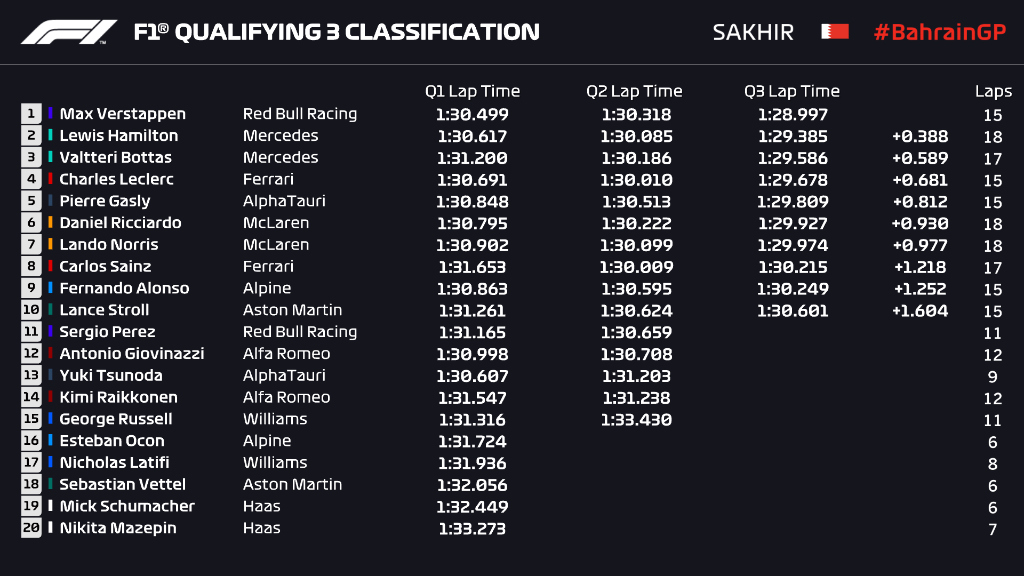 F1 | Mercedes to reshuffle their F1 technical team, Allison to step down from his position