The 2021 season opener was an eventful race. It all started during the formation lap, where Sergio Perez’s car stopped suddenly which caused him to start the race from the pit lane while everyone else had to do another formation lap to fill in the gap that the mexican left on the grid.

As the lights went out and the race officially began, they all went past turns 1 & 2 and almost all the way through turn 3, where Nikita Mazepin had an incident that caused him to not finish his debut race in Formula 1 and the deployment of the safety car for a couple of laps.

Before the Russian into with the wall, Verstappen kept the first place, followed by the silver, now black, arrows closely behind. Lineup that was kept for most of the race.

After restarting the race when the safety car went in again, Pierre Gasly had a touch with Daniel Ricciardo’s McLaren, causing the Frenchman to lose his front wing, deploying Virtual Safety Car while marshals cleaned up the debris. Around this time Verstappen started to complain of difficulties, we learned later that it was the differential, but it was not troublesome for the dutch.

On lap 12, Checo Perez had already gained positions, putting himself in 11th place. At this time, Norris had taken 4th place from Leclerc and Fernando Alonso started the pit stop parade, changing to medium tyres. Norris and Leclerc made the same change, without altering positions while Mercedes changed Hamilton’s tyres to a hard compound.

Bottas had a flashback to 2020 Sakhir GP with a 10.9s pit stop. Which caused him to lose some spots and make a huge gap with Verstappen which he couldn’t recover from, staying and finishing in 3rd place.

Max led the race for some laps, it was around lap 32 that Hamilton ws getting closer to the Red Bull, giving him the opportunity to lead and win the race later.

We could see Alonso pitting and abandoning the race due to problems in the rear brakes of the Alpine in lap 34. A disappointing comeback for the Spaniard.

Perez made another pit stop in lap 39, changing to médium tyres and going out on 7th place and starting a fight with former teammate Lance Stroll. The mexican started another boxes parade, Max changed rubbers to a hard compound to shorten his gap to Hamilton. Verstappen quickly made a fast lap, shortening by a second his gap to the race leader.

In lap 45, Sebastian Vettel and Esteban Ocon started a fight for the spot. The german made a wrong move, causing him to touch the frenchman’s car, which made both of them spin out and causing a bit of damage to VET’s front wing.

Meanwhile, the fight for first place was getting intense. In lap 50 the gap between HAM and VER was les tan 2 seconds. You could sense the pressure and nervousness in both teams. Max was preparing top ut himseld in DRS reach to steal the winning spot from Hamilton. In the last 2 laps, he did make it, but Hamilton again demonstrated why he is the champion and got back the leading spot from Max.

And that i show this exciting first race in Bahrain went by. An incredible win for Mercedes after a tight but thrilling fight with RedBull, an amazing race from Perez (getting him driver of the day) and some insight on how the season is going to go by.

From a pit lane start to a P5 finish

It was an eventful Red Bull debut for @SChecoPerez 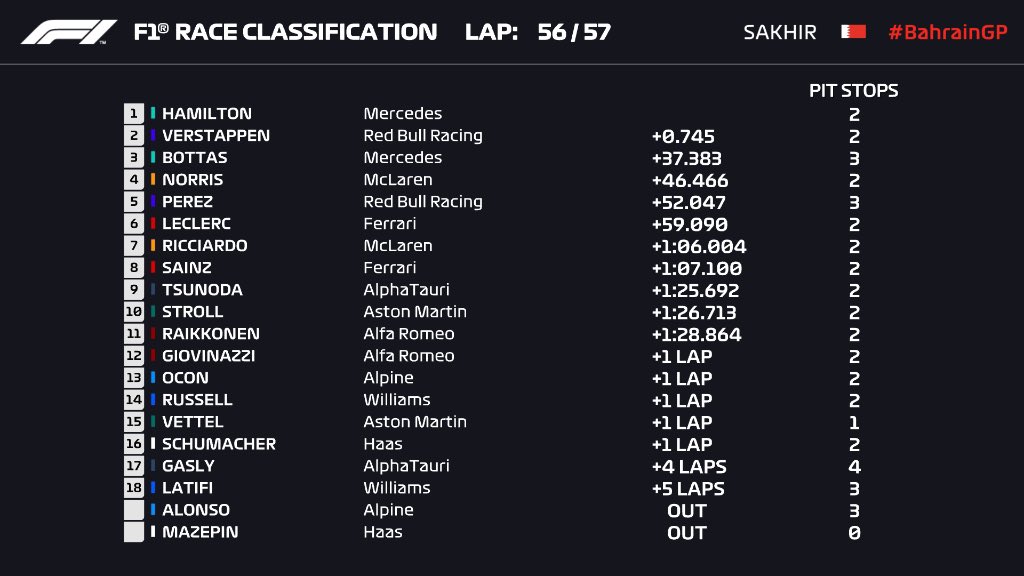