After a bizarre first practice session that saw several incidents, the second Free Practice session was more of a straightforward affair as Mercedes took their second 1-2 of the day by just under 0.010

Verstappen's session came to a shuddering halt after a technical failure caused his Red Bull to grind to a halt on the run to Tamburello, with Red Bull's mechanics just falling to get the Dutchman back out on track as he finished the session a disappointing fourteenth fastest.

But if anyone can fix a problem, it's @redbullracing's mechanics and engineering team! 👊#ImolaGP 🇮🇹 #F1 pic.twitter.com/T6ANbAdW0P

AlphaTauri continued their good form on their home track with third and seventh fastest in the session, with Gasly the quicker of the pair just under a second down on Bottas.

Ferrari had reasons to be cheerful in the second practice session with Carlos Sainz fourth fastest ahead of Leclerc; the 23-year-old looked to set have the fastest time of the session but it got deleted due to a track limits violation.

The Monegasque's session was cut short after a crash on the exit of Rivazza, losing his front wing and right front wheel in the process.

🚩 RED FLAG: Session will not restart🚩

Sergio Perez made up for lost time in the first practice session with the seventh-fastest time ahead of Lando Norris and Antonio Giovinazzi who showcased Alfa Romeo's good pace around the twisty Imola circuit.

Lance Stroll rounded off the top ten to salvage some pride for Aston Martin after Sebastian Vettel could only manage fifteenth fastest as the British team continued their testing start to the new season.

Fernando Alonso had a challenging return to Imola. The Spaniard only managed thirteenth fastest whilst damaging his A521's floor after going wide at the Variante Alta whilst his teammate Esteban Ocon managed the eleventh fastest time.

Nicholas Latifi had a good second practice session with the twelve quickest times, after running in the top 10 of the session for a considerable part of the session.

Daniel Ricciardo's second practice session was a testing one after his fastest lap time was deleted for track limit infringements causing him to finish eighteenth quickest.

Nikita Mazepin's troublesome Friday continued into the afternoon session, with the Russian half a second down on Mick Schumacher in the second Haas, with Mazepin venturing off the circuit as he complained of a lack of grip on team radio. 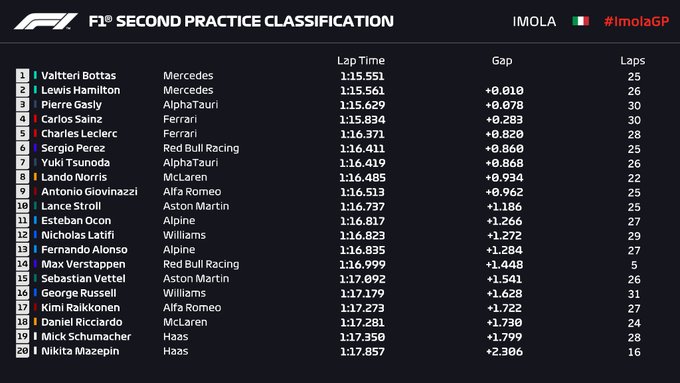 F1 | British GP | Verstappen: “I never give up", as he declares seventh a good result after damage