Rain started to fall before the race at Imola and Fernando Alonso went off at Tosa and damaged his front wing. Luckily for the Spaniard, he managed to get out of the gravel and make it to the grid to take his 15th place grid spot.

As well as Alonso’s problems, Lance Stroll had a right rear brake fire, with Valtteri Bottas picking up a left rear puncture on his way to the grid.

Sebastian Vettel was forced to start from the end of the pitlane due to brake concerns on his Aston Martin car and gave the team extra time to work on the car.

Gasly, Ocon, Schumacher and Mazepin started on the full wet compound, with the rest of the field on inters.

Charles Leclerc spun on the formation lap on inters but managed to recover from out of the gravel and maintain his 4th-placed grid slot.

Verstappen got a magnificent start to take the lead into the first chicane. Hamilton tried to tough it out around the outside but the Dutchman held firm; the Brit went across the yellow sausage kerbs but held onto 2nd.

A mistake from Sergio Perez at the Variante Alta allowed Charles Leclerc to take P3.

The Safety Car made a very early appearance after Nicholas Latifi, who spun at T12, recovered, but then made contact with Nikita Mazepin in the Haas. He hit the wall heavily and was out of the race.

Mick Schumacher crashed trying to warm his tyres up behind the Safety Car and lost his front wing.

Schumacher loses the rear end warming his tyres, and takes off the front wing

The pit lane is currently closed due to the debris#ImolaGP 🇮🇹 #F1 pic.twitter.com/z5KHs5RYzD

Sergio Perez also had an excursion into the gravel and dropped to 6th but took both spots that he had lost. The Mexican got hit with a 10-second penalty for overtake behind the Safety Car.

Verstappen, Hamilton, Leclerc, Perez and Ricciardo was the top 5 on the restart. Hamilton attacked his Dutch rival but couldn’t make the move.

Lando Norris starting carving his way through the field and passed Stroll, Sainz and Gasly to move into P6.

From P6, Gasly fell away on the wet tyres and dropped to 15th as it became clear the inter was by far the faster tyre as the track started to dry.

Sebastian Vettel was the first driver to switch to the dry tyres on lap 22 as he fitted the medium compound tyre. However, he was hit with a 10-second stop-go penalty moments later as his wheels weren’t fitted on the grid five minutes before the race.

Carlos Sainz took P6 from Daniel Ricciardo before the rush to dries began as Sebastian Vettel started to set fastest laps on the medium tyre. Verstappen pitted before Hamilton and it paid off as he maintained his lead.

Behind the dominant top two, Leclerc kept P3, followed by Norris and Perez who served his penalty.

The high drama of the race reached its peak on laps 31 and 33. Hamilton, running in 2nd, went off at Tosa and broke his front wing; he fell all the way down to P9 after eventually getting away from the scene of the incident.

Hamilton slides off into the gravel, and hits the front wing#ImolaGP 🇮🇹 #F1 pic.twitter.com/7BBN3JN3IS

Lap 33 saw an extremely scary accident between George Russell and Valtteri Bottas as they battled for position heading into the first chicane. Russell touched the grass as he tried to overtake the Finn and the pair made heavy contact with each other and then the barrier.

Both drivers are out of the car and okay#ImolaGP 🇮🇹 #F1 pic.twitter.com/Y0xWuGm8Mb

A massive amount of debris and damage forced the race director to bring out the red flag on lap 34.

The order on the rolling restart was Verstappen, Leclerc, Norris, Perez, Sainz, Ricciardo, Stroll, Hamilton, Tsunoda and Raikkonen. The Finn spun behind the Safety Car and dropped from P8 to P10.

Max Verstappen had a massive scare on the restart as he almost spun in turn 17. However, he survived and made a gap as he floored the throttle to resume the race. Norris immediately overtook Leclerc for P2.

Yuki Tsunoda had passed Hamilton into the first chicane but then spun in extremely tricky conditions. Lap 38 saw Sergio Perez spin out of P4 as the Red Bull driver caught a bit of the damp tarmac.

Hamilton made quick work of Stroll and Ricciardo to move into P5 as he started his climb through the pack.

Antonio Giovinazzi was forced to pit on lap 40 from P9 as the Alfa crew worked quickly on his right rear brake which seemingly had debris around it.

The World Champion continued his charge through the pack as he overtook both Ferraris and Norris to take P2 by lap 60.

Hamilton finally gets past Norris for second#ImolaGP 🇮🇹 #F1 pic.twitter.com/jfbzqqvhQs

Out front, Max Verstappen delivered a masterclass around Imola to take a thoroughly dominant victory in the Red Bull. Lewis Hamilton fought back to P2, with Lando Norris a superb P3. Leclerc and Sainz put two Ferrari cars in the top five. 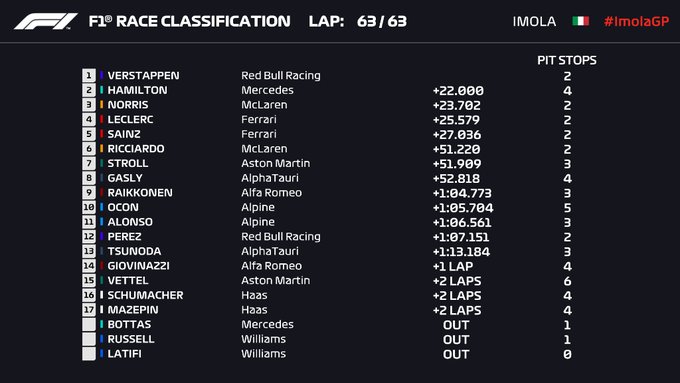 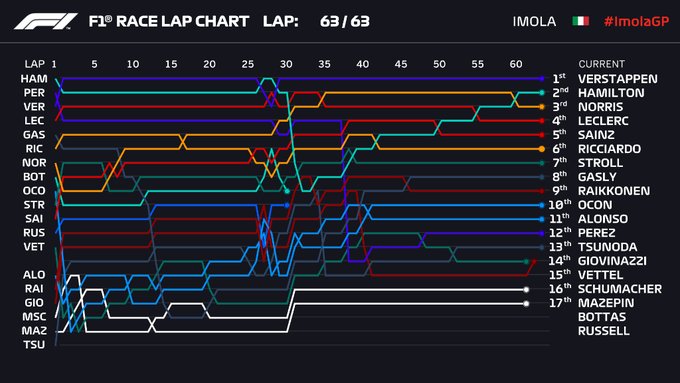 F1 | Spanish GP | Seidl confirms Norris had tonsillitis, adds that "we would never risk the health of Lando"

F1 | Spanish GP | Lewis Hamilton, driver of the day, on the incident with Magnussen: “I was just on a normal line, I was on the inside and he came out of nowhere and hit me. "