With Hamilton and Verstappen topping the times in all three practice sessions, qualifying looked set to be another instalment of the duel between the two championship contenders as they battled for pole in the heat of Spain.

Qualifying was delayed by ten minutes after marshalls repaired a barrier at turn nine after it had suffered damage in the Formula Regional race with FIA race director Michael Masi supervising the repair work before qualifying.

The theme of Q1 was traffic issues in the final sector, with Lando Norris having his first qualifying run hampered by several cars blocking him as they tried to get out of the way of the McLaren with the stewards taking a look into the incident; Pierre Gasly also suffered trouble in the first part of qualifying as the Frenchman had to make a front wing change after his first quick run.

Yuki Tsunoda's challenging weekend continued to get worse as the Japanese driver's attempt to get a clear track for his last qualifying lap failed to bear fruit as he was eliminated from qualifying by Antonio Giovinazzi, who just pipped the rookie by +0.007 to make it into Q2 with Kimi Raikkonen, Nicholas Latifi, as well as both Haas's also eliminated in the first part of qualifying.

Q2 saw Verstappen throw down an early gauntlet with the Dutchman's first quick run just under half a second faster than Valtteri Bottas and Hamilton, with Norris best of the rest in the first half of Q2 with fourth fastest and over seven-tenths down.

Aston Martin's turbulent start to the season continued in Q2 with Lance Stroll and Sebastian Vettel both eliminated from the second part of qualifying, as Stroll out-qualified Vettel for the third time this season with the 11th fastest time ahead of Gasly, who split the Aston Martin pairing in 12th ahead of Vettel and Giovinazzi with George Russell rounding off Q2 in 15th.

Sergio Perez had a hair-raising moment in the opening stages of the top 10 shootout with the Mexican spinning at the turn 13 chicane with the Mexican hampering his and Hamilton's first push laps.

Despite this hindrance, Hamilton topped the first half of Q3 ahead of Verstappen and Bottas, with Esteban Ocon fourth quickest on his first fast lap in the improving Alpine.

Hamilton hung on to pole after Verstappen and Bottas failed to improve their times, securing the seven-time World Champion his 100th pole with Charles Leclerc continuing Ferrari's quick pace with fourth fastest ahead of the impressive Ocon and Sainz Jr, with Daniel Ricciardo seventh fastest ahead of Perez, Norris and Fernando Alonso. 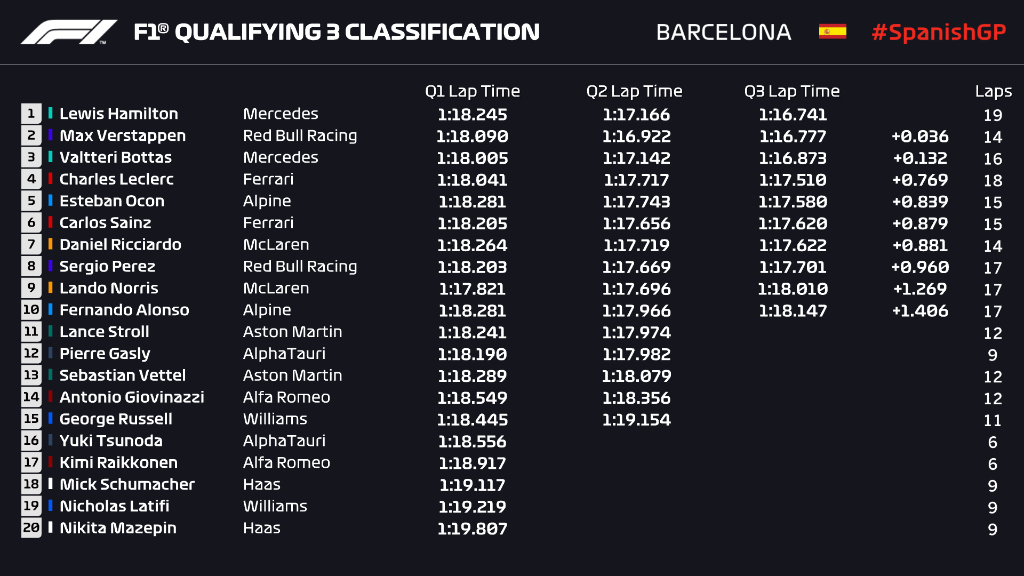 F1 | Styrian GP | Valtteri Bottas on his relationship with Mercedes: ”Everything is good.”