The sun is shining, and the scene is set for another great weekend of racing. Formula 1 returned to the Principality after a one-year hiatus due to the pandemic.

Red Bull is hunting their first victory in Monaco since 2018 and their first free practice session seems to be well-promising.

The Milton Keynes-based team continues to impress with Perez setting the benchmark improving to 1m12.487s with his final run on soft tyres. The Mexican outperformed his teammate Max Verstappen who concluded in P3 on mediums.

Carlos Sainz was second by just 0.119s in an impressive show for Ferrari.

Contrary to the Spanish driver, Monegasque Charles Leclerc doesn’t have a great record here on his home circuit – two starts, two DNFs isn't quite what he would have wanted.

Today hasn’t started as expected either, with only four laps before having to go back to the pits due to a reported engine issue.

The Monaco GP is that one race every driver dreams of winning; however and interestingly enough neither seven-time World Champion Lewis Hamilton nor his main contender Max Verstappen have great records here.

On the contrary, there are other drivers who have excellent memories from here. 32-year-old Daniel Ricciardo is one of them - he has two poles and a win to his name and loves street circuits.

Speaking of McLaren, they have been in the spotlight all week – first, their announcement on the special Gulf-style livery and, secondly, the news of Lando Norris signing a multi-year contract extension.

Announcements apart, McLaren hasn’t impressed:  Lando Norris had a pretty decent session ending up there in P7 but Ricciardo had a much quieter session, finishing P15 – although coming into the weekend decided to fight for pole.

Lewis Hamilton and Valtteri Bottas in their medium-tyred Mercedes ended the session in fifth and sixth position, respectively. Ahead of them, the French Pierre Gasly in his AlphaTauri.

Aston Martin may be fancying to score some points this weekend with their qualifying pace often being better than their race pace. But they'll have to work hard for it, with Ferrari seemingly right up there in the fight out front, AlphaTauri and McLaren looking strong and Alpine yet to reveal their full potential.

Sebastian Vettel won here in Monaco back in 2011 and 2017, but he is still working on getting the grips with his new car. He finished P8, behind Norris’ McLaren, while teammate Lance Stroll was 11th.

Between the two Aston, was AlphaTauri's Yuki Tsunoda (P9) - who is running at Monaco for the first time in his racing career.

13th-place for Fernando Alonso - The Spaniard caused a virtual safety car after coming into the last corner too quickly and clonking the wall with his front wing. Teammate Esteban Ocon concluded 16th overall.

Fernando heads back out to resume his FP1 session! #MonacoGP pic.twitter.com/8PcazHl5fv

Williams are celebrating an important milestone this weekend: their 750th Grand Prix. Given the nature of the circuit with qualifying being so crucial; the pressure will be on George Russell to deliver on Saturday - and then see if he can hold up some quicker cars on race day.

Rookie Nikita Mazepin suffered some issues as he wasn’t particularly happy with the handling of his car after kissing the wall somewhere. The two Haas drivers put their cars 17th and 18th respectively, in their first F1 outings at the Principality. 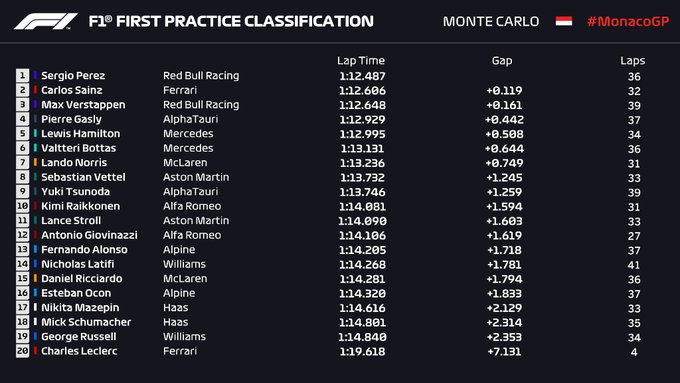 F1 | Christian Horner on inflation issues: "About seven of the teams probably need to miss the last 4 races"