After a one-year break due to the Coronavirus pandemic, it is time for Azerbaijan to come back on track for this year’s F1 championship. The street circuit of Baku welcomed the race weekend opening the track for the first free practice session and Max Verstappen continues dominating as he finished Free Practice P1.

A modification was done ahead of the weekend in the circuit at Turn 8. The apex kerb at the infamous castle section was removed on Thursday. This gives drivers the chance to go wider into the turn hence go quicker, and the times from last Baku FP1 at 2019 were now over 4 seconds faster.

20 minutes into the session Lewis Hamilton topped the table with a time of 1:43.893 achieved with the soft compound. Max Verstappen followed 0.205 tenths behind, lapping with the yellow Pirellis. Leclerc, Norris, and Vettel completed the TOP 5 at that moment.

Sergio Pérez was the last driver to do a timed lap, going out to the track with 35 minutes to go. When he was attempting for the first time his first flying lap was interrupted by yellow flags at Sectors 1 and 2 due to Tsunoda going straight into the exit of turn 4 and getting stuck a few minutes. Pérez's clock marked his first timed lap 1.937s away from the leader and put him 13th on the table.

Daniel Ricciardo topped the timesheets going 0.161 tenths faster than Hamilton half an hour left into FP1. The Australian driver lapping with red tyres. Quick after this, his teammate Lando Norris was clocking almost a second down to Ricciardo's top time but the young Briton spun at the entry of the long Baku straight with no incident. McLaren with a clear sign of good performance looking ahead of the weekend's sessions.

The session was constantly filled with brief yellow sectors as all drivers fought with narrow space and vastly big cars, but no incident was registered on FP1's morning in Azerbaijan.

The moment Max Verstappen's Red Bull took charge of soft tyres, it topped the times pushing back both Ferraris +.0.043 above Leclerc and 0.337 ahead Sainz, in what looks like a promising start for the Maranello team, after a bittersweet weekend in Monaco. 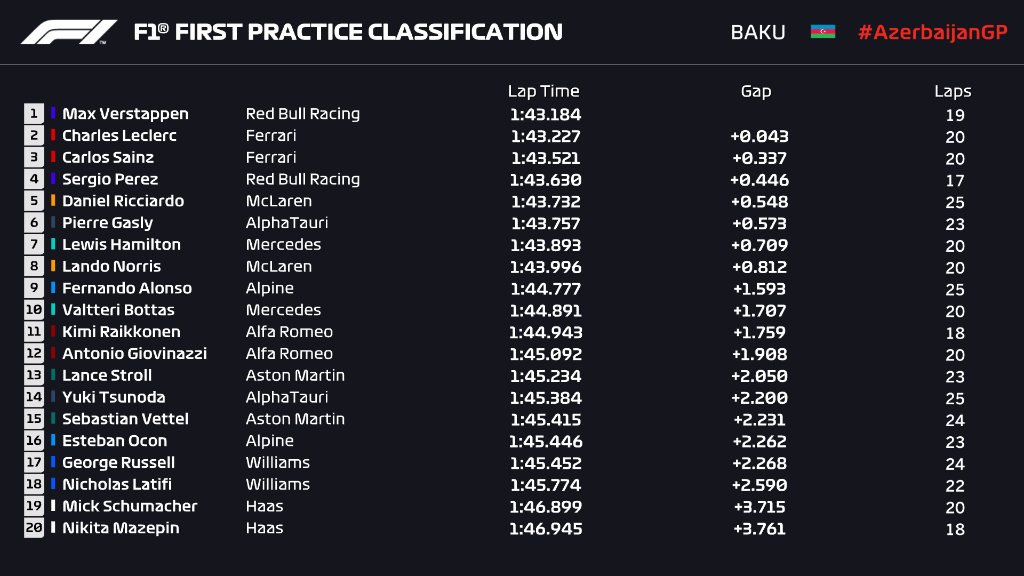 F1 | McLaren Technical Director Key thinks we'll see some “very different cars” this year, and that their development will be consistent throughout the season

F1 | Martin Brundle is sure that Lewis Hamilton ...