Pierre Gasly was a surprise pacesetter in the final practice session as the Frenchman went fastest in a chaotic FP3, which saw championship leader Max Verstappen end his session early after crashing at Turn 15.

With warm temperatures beating down on Baku, the final Practice session would be the last chance for the teams to prepare the cars for what was poised to be an important qualifying session.

Haas were the first to send their cars out on track, with Mick Schumacher leading Nikita Mazepin out of the pits as the rookies went out to gain more valuable track time.

Fernando Alonso was next out on track as the Spaniard attempted to make full usage of Alpine’s straight-line speed; however, Alonso’s first lap was over a tenth slower than Mazepin’s 1:45.711.

Valtteri Bottas made an early mistake as the Finn went straight on at Turn 3; however, the Finn spun his car in the right direction and got back underway.

Sergio Perez briefly went quickest on the hard tyres in the opening stages of the session, with the Mexican over three tenths ahead of Gasly before Yuki Tsunoda went fastest with a 1:43.447 on the soft rubber.

Reigning World Champion Lewis Hamilton continued to struggle in Baku, with Hamilton reporting a lack of grip on the team radio as Mercedes woes continued in Baku.

Gasly was next to go top of the timesheets after the Frenchman took full advantage of a tow from Perez to beat Tsunoda by over two tenths.

Championship leader Verstappen’s difficult start to Practice ended with a trip into the barrier at Turn 15, with the Dutchman slamming the wall and damaging the front right track rod.

The red flag was brought out to retrieve Verstappen’s stranded Red Bull.

At the halfway point in the session, Gasly led Tsunoda and Leclerc, with Perez, Verstappen and Sainz rounding off the top six.

With 25 minutes left to go, the session was restarted, with a queue of cars forming at the end of the pitlane to go back out on track.

Hamilton then had to avoid Aston Martin’s Lance Stroll as he approached the final corner, with the World Champion just avoiding the Canadian.

Carlos Sainz Jr was on a quick lap and had set the quickest first sector of the session before Spaniard had to abort the lap after overcooking it into Turn 15.

Luckily for the Spaniard, he could reverse out of the escape road and get back underway without causing any damage.

Mazepin became the next victim of Turn 15 after clipping the barrier on the exit of the corner, damaging his front wing in the process and forcing the Russian back to the pits.

Gasly’s reign at the top of the timesheets was briefly ended by Perez, who set a blistering time on the soft tyres to go top by just under a tenth from Charles Leclerc and Gasly.

George Russell’s session ended early after losing drive in his Williams, with the British driver having to pull off the track as oil poured out of the back of the Williams, bringing out the virtual safety car.

Sebastian Vettel was next to go off at Turn 15, with the four-time World champion just avoiding the barrier as he spun his way back on track.

Gasly then produced an excellent lap to go back on top of the timesheets with a 1:42.251 as the Frenchman finished the session quickest ahead of Perez.

Hamilton finally found some pace courtesy of a tow from Perez, with the Brit going third fastest but over four tenths down on Gasly.

Leclerc was fourth fastest ahead of Sainz Jr and Lando Norris, with Alonso, Tsunoda, Esteban Ocon and Daniel Ricciardo rounding off the top 10. 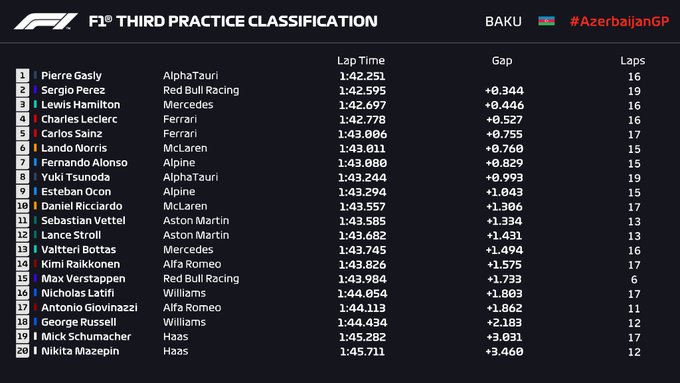