In what was a race full of drama, Verstappen drove a perfect race; however, a late tyre failure cost him the race victory.

Perez then inherited the lead and held the position at the second restart as Hamilton locked up into Turn 1, dropping him out of the points.

With bright skies looming over the Baku skyline, the fourth Azerbaijan Grand Prix was set to be an interesting affair with Charles Leclerc starting from pole position for the second race weekend in a row, with the Monegasque starting alongside Hamilton on the front row.

Championship leader Verstappen was third on the grid alongside Gasly, with Carlos Sainz Jr, who crashed in qualifying and Perez starting sixth after being promoted up a position after Lando Norris received a three-place grid penalty.

At the start, Leclerc got a good launch from pole and immediately covered off Hamilton into Turn 1 with Perez already on a charge, passing Gasly for fourth into Turn 3.

Hamilton then used the tow from the Ferrari perfectly to take the lead off Leclerc down the main straight on Lap 3, with the Monegasque’s defence coming up just short.

Verstappen was next to challenge Leclerc into Turn 1; however, the Dutchman wasn’t close enough and would have to wait for another lap to get past the Monegasque.

Esteban Ocon was the first to retire from the race on Lap 4 after the Frenchman lost drive and had to pull into the Alpine pits for his first retirement of the season.

Verstappen finally got past Leclerc on Lap 7, with the Dutchman flying straight past the Ferrari on the main straight.

Yuki Tsunoda was next to move up the order going straight past Fernando Alonso on the main straight, for seventh as the Spaniard pulled into the pits a couple of laps later for a fresh set of tyres.

Perez continued to move up the order as he produced a carbon copy of Verstappen’s overtake to move up into third and demote Leclerc from the podium places.

Leclerc was the first of the top six to pit for hard tyres on Lap 10, with the Ferrari lead driver rejoining in 10th, with Tsunoda also pitting on the same lap from seventh place for a set of hards.

One lap later, Sainz pitted from fifth for hard tyres as the Spaniard rejoined behind Kimi Raikkonen in 11th place; but, the Spaniard cost himself four positions after going down the escape road at Turn 8.

Race leader Hamilton pitted on Lap 12 for hard tyres; however, the Brit lost a lot of time in the pits as Gasly made his way down the pitlane for his stop.

Verstappen was next to pit for hard tyres on Lap 13, with the Red Bull mechanics producing a flawless stop to get the championship leader out in front of Hamilton.

Perez finally came in for a new set of hard tyres on Lap 14, and despite a slow left rear change, the Mexican got out in front of Hamilton in third place.

Vettel led the race for four laps, as the German who had yet to make his stop stayed out on the soft tyres with Aston Martin Racing also not pitting his teammate Lance Stroll who made up fourteen positions after starting on the hard tyres.

Aston Martin finally pitted Vettel from the race lead on Lap 18, with the Aston Martin mechanics getting the German out in front of Tsunoda in seventh and on fresh hards.

Despite having a tow, Hamilton struggled to get past Perez, with the Mexican doing a sterling job of keeping the World Champion behind in second.

Nikita Mazepin made a mistake into Turn 4 with the Russian having to reverse his Haas after going down the escape road, narrowly avoiding Verstappen and Perez who quickly lapped him down the main straight.

Stroll’s great drive came to an end after a violent shunt caused by a tyre failure near the pitlane entrance, wounding the Canadian and bringing out the safety car on Lap 31.

With under 20 laps to go, Verstappen led Perez and Hamilton, with Gasly, Leclerc and Vettel completing the top six and on fresher tyres with Tsunoda, Norris, Bottas and Ricciardo completing the top 10 as the pit lane remained closed.

The pitlane opened once again on Lap 35, with George Russell, Giovinazzi and Alonso pitting for fresh tyres with Mick Schumacher also pitting but having to be pushed back after an unfastened front left wheel.

The safety car pulled in on Lap 35, with Verstappen timing his restart perfectly courtesy of some synchronized weaving from Perez who just kept Hamilton back, with Vettel passing Leclerc for fifth into Turn 1 as Leclerc locked up into Turn 2 just avoiding Vettel’s rear wing.

Vettel quickly disposed of Gasly down the main straight on Lap 37 as the German moved up to fourth and was now closing in on Hamilton for third.

But when victory looked secured, Verstappen suffered a catastrophic tyre failure down the main straight with five laps to go, costing the Dutchman his third race victory of the season.

The red flag was brought out with three laps to remove Verstappen’s stricken Red Bull.

As the field drove through the pitlane to avoid the recovery truck, Nicholas Latifi was told by his team to stay out on track, with the Canadian furious with his engineer as he risked a potential penalty.

The field made use of the red flag to change his tyres, with the remaining 18 runners changing to the softs for the two-lap sprint to the checkered flag.

Russell would not take the second start as a technical failure that saw the Brit retire from the race with two laps to go.

At the second start, Hamilton got the perfect launch but went too hot into Turn 1 and lost the race lead to Perez, who regained the lead from Vettel and Gasly as the field tried to keep it clean for the final lap of the race.

Gasly was then attacked by Leclerc, who got the move done down the main straight before the Frenchman retaliated to regain the position of the Ferrari driver.

However, no one could stop Perez, who took the second win of his career by over a second from Vettel, who drove an excellent race from 11th on the grid to finish second, with Gasly wrapping up third place despite power issues hampering during the race.

Pole sitter Leclerc was fourth ahead of Norris and Alonso rounding off the top six. Tsunoda completed an excellent weekend’s work with seventh ahead of Sainz and Ricciardo, with Raikkonen scoring his first point of the season after a superb comeback drive from 14th.

With Hamilton only managing 16th, Verstappen left Baku with his championship lead and five-point gap to Hamilton intact, with Perez moving up to third ahead of Norris. 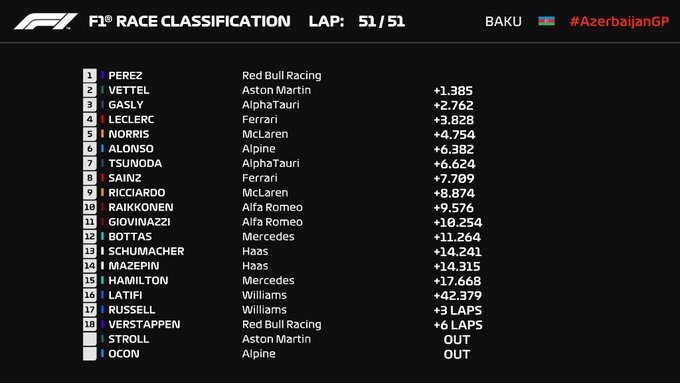 F1 | French GP | "Our car was quicker but a wrong strategy costed us the race", reckons Wolff