Max Verstappen will go into today’s qualifying session as the firm favourite for pole position after going over seven-tenths quicker than Mercedes’s Valtteri Bottas to finish Free Practice 3 quickest.

In what was a session dominated by track limits and time deletions, it was a see-saw battle between Verstappen and the Mercedes pair, the championship leader kept the pressure on the Brackley based team as Lewis Hamilton continued to struggle with his new chassis, only managing the fifth-fastest time.

With temperatures in the high 20s with cloudy skies, Free Practice 3 looked set to be a showdown between both Mercedes and Verstappen, with Ferrari and Alpine potentially involved in the fight for the top six.

Despite some calls from team managers after some cars had picked up damage on Friday, the troublesome Turn 2 kerbs would not be removed for the rest of the weekend with race control making changes to track limits restrictions with now the exit of Turn 6 being actively monitored.

The Haas pair of Nikita Mazepin and Mick Schumacher were the first two drivers out on track after over ten minutes in the session, with the pair cleaning the track on their opening laps.

Mazepin quickly tested the limits of his Haas at Turn 2, with the Russian producing a half spin on the exit of the corner to destroy his tyres and force him to limp back to the pit lane.

Bottas began to make use of his new chassis to go briefly quickest with a 1:32:346 before Verstappen went top with 1:32:337 despite locking up in the latter part of the lap.

The Finn then found more time in the final sector to go quickest once again, whilst Verstappen faced the wrath of the stewards with a track limits infringement on the exit of Turn 6, seeing his time deleted.

Antonio Giovinazzi and Yuki Tsunoda also suffered time deletions after the pair went wide into Turn 6, with the Japanese driver puzzled into why his time had been deleted.

Pierre Gasly was in good form in FP3, with the Frenchman briefly going fourth quickest in the Alpha Tauri, as the Frenchman looked for his first podium at Paul Ricard in front of his home crowd.

Hamilton improved with a 1:32:266 briefly, going second quickest, but Ferrari’s Carlos Sainz Jr produced a 1:32.195 to demote the World Champion back to third.

Verstappen then produced an excellent lap to break into the 1.31s and go quickest by over seven-tenths with the Dutchman stamping down his authority on the field as he finished the session quickest ahead of Bottas and Sainz.

Baku winner Sergio Perez was fourth quickest ahead of Hamilton and Lando Norris, with Alonso, Esteban Ocon, Gasly and Daniel Ricciardo rounding out the top 10. 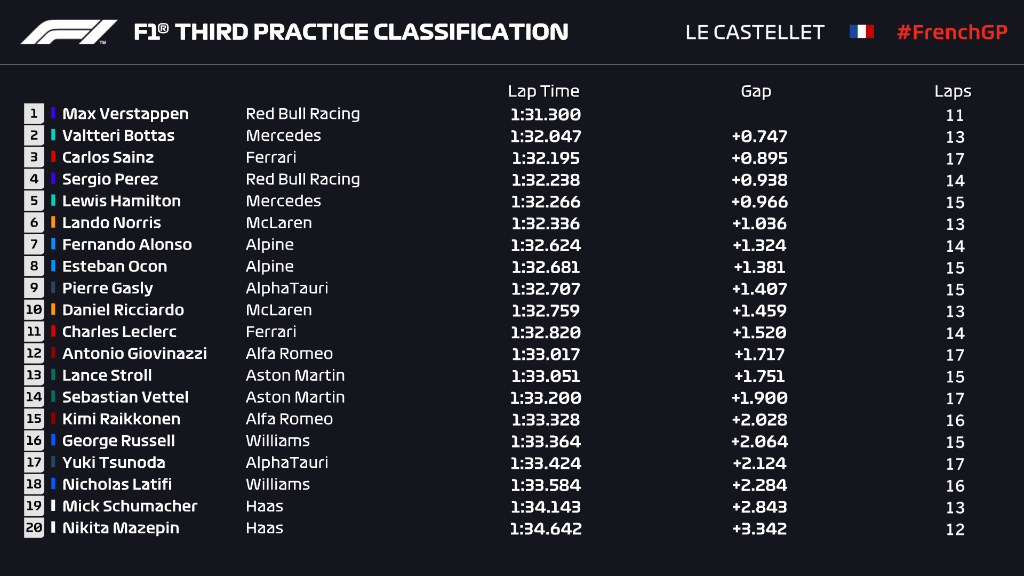 F1 | FIA to reduce number of obligations of race director; Masi could still be fired

F1 | AlphaTauri to launch its new car on February 14th

F1 | FIA to reduce number of obligations of ...

F1 | Leclerc and Sainz complete running in the ...