Less than 4 minutes into qualifying saw Yuki Tsunoda crash and brought out a red flag. The Japanese driver hit the entry kerb really hard at T1, spun and went into the barrier. His session was done following that incident.

Charles Leclerc eventually set the opening time of qualifying with a 1:33.187, which was immediately by teammate Sainz on a 1:32.289.

Norris, Gasly, Sainz, Vettel, Ocon and Alonso completed the top 10 after the first runs. Mick Schumacher was an impressive P14 in the Haas.

Latifi, Raikkonen, Mazepin, Stroll and Tsunoda were in the knockout zone ahead of the final attempts.

Ultimately no drivers could improve as Mick Schumacher crashed in turn 6 at the end of Q1 and a second red flag was needed to clear the damaged Haas. The 22-year-old lost the rear and hit the barriers. The German got through to the Q2 but couldn’t take part because of his accident.

Latifi, Raikkonen, Mazepin, Stroll didn’t get the chance to improve and joined Tsunoda in getting knocked out.

With the soft tyre proving to be difficult to last for a whole lap, every driver bar Russell went on mediums on the first runs of Q2.

Hamilton, on his second lap, put his car into P1 on a 1:30.959, 0.012s quicker than Sergio Perez. Championship leader Max Verstappen, the impressive Carlos Sainz and Valtteri Bottas completed the top 5.

Gasly, Norris (the second lap after his first attempt was deleted because of track limits), Alonso, Ricciardo and Leclerc rounded out the top 10 ahead of the final fliers. Ocon, Vettel, Giovinazzi and Russell found themselves in the elimination zone.

Bottas leapt to the top of the charts with a second run on mediums as he logged a 1:30.735, just 0.053s quicker than teammate Hamilton. Perez, Verstappen and Sainz rounded out the top 5.

Gasly, Norris, Alonso, Leclerc and Ricciardo were the other five drivers to book a spot in the final segment of qualifying.

Ocon, Vettel, Giovinazzi [all three less than 0.2s from making it through] and Russell all stayed in the bottom five and joined Schumacher in dropping out in Q2.

Verstappen put in an excellent first attempt thanks to a 1:30.325, 0.386s clear of Hamilton and just over half a second in front of Perez. Bottas was P4, a massive 0.801 behind the Dutchman.

Sainz, Norris, Alonso, Leclerc, Ricciardo and Gasly [time deleted for exceeding track limits at T6] rounded out the top 10 before the final laps of qualifying.

Verstappen improved again on his final lap and put in a storming lap of a 1:29.990 to take pole in the Red Bull. Hamilton also made gains but finished 0.258s adrift of the Dutchman. Bottas beat Perez to P3 as they finished within half a second of pole.

The superb Carlos Sainz was 5th, followed by home hero Pierre Gasly in P6. Leclerc, Norris, Alonso and Ricciardo filled out the remaining spots in the top ten shootout. 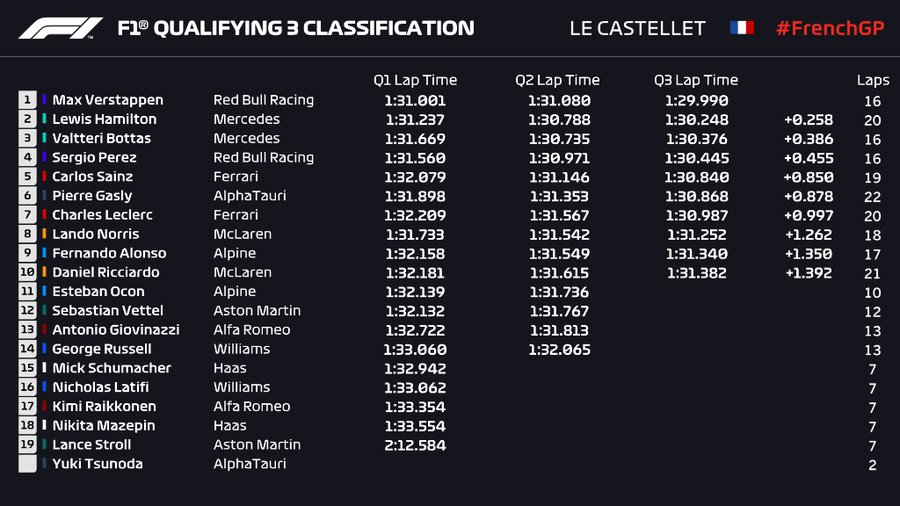 He goes even faster, and will line up ahead of the two Mercedes 🔥#FrenchGP 🇫🇷 #F1 pic.twitter.com/kTqKf3W2at

F1 | Picci, Sauber chairman explained why he left the team, citing Vasseur's management and hinting at the choice of the 2022 line-up