Max Verstappen continued his love affair with the Red Bull Ring after the Dutchman took his third victory at the circuit with a dominant win in today’s Styrian Grand Prix.

Despite a small issue with his brake pedal Verstappen had a perfect race, leading every lap of the race as he extended his championship lead over Lewis Hamilton to 18 points who had no answer to both Red Bull and Verstappen.

Although thunderstorms were forecast for the week of the race, Sunday dawned bright and sunny, with track temperatures at the Red Bull Ring reaching 53 degrees celsius before the start of the race.

Polesitter Verstappen and Hamilton would start the race on the medium tyres for the first stint of the race, with Lando Norris and Sergio Perez starting on the softs in what looked set to be a battle of the one-stop two-stop strategies.

At the start, Verstappen got a perfect getaway and immediately covered Hamilton off on the run into Turn 1 with the field trying to squeeze through cleanly.

However, there was pandemonium into Turn 2 as Antonio Giovinazzi and Nicholas Latifi were hit from behind by the AlphaTauri of Pierre Gasly who was limping back to the pits after picking up a left-rear puncture courtesy of a collision with Charles Leclerc on the run into Turn 2 forcing the Monegasque to pit for a brand new front wing and the Frenchman into retirement.

Daniel Ricciardo tried to begin his charge through the order after starting from thirteenth on the grid, with the Australian profiting from the chaos on the run-up to Turn 2 to move up to ninth by Lap 6.

Ricciardo’s charge fell apart as the Australian began suffering from a lack of power, seeing him fall back down the order to 13th.

Perez helped widen the smiles on the Red Bull pit wall after breezing past Norris into Turn 2 on Lap 10, with the Mexican holding off Norris’s best attempts to repass him into Turm 3

One lap later, it was Valtteri Bottas’ turn to go past Norris, with the Finn repeating Perez's move into Turn 2 to move up to fourth place.

Fernando Alonso led a train of six cars in seventh place as the two time World Champion resisted the attacks of Williams’ George Russell who was making full use of having fresher medium tyres to hold on to eighth position in the first quarter of the race.

Hamilton lost more ground on Verstappen after nearly losing the rear of his Mercedes into Turn 3, with the reigning World Champion just hanging onto the Mercedes and avoiding a spin.

Russell pitted from eighth place on Lap 26; however, the Brit was slow out of the pits due to technical issues, effectively ending any chance of Wiliams scoring points for the first time since the 2019 German Grand Prix.

Perez was the first of the top five to pit for fresh hard tyres, but the Mexican’s stop was a slow 4.8 seconds courtesy of a slow left rear, dropping him behind Norris in fifth place.

Next to stop was Bottas a lap later, with the Finn going onto hard tyres and clear of Perez to move into fourth place.

Hamilton pitted from second on Lap 29, with the Brit rejoining in second place and clear of Norris, who had yet to stop for new tyres.

One lap later, Verstappen pitted from the lead on Lap 30, with the Red Bull pit crew producing a near-perfect pitstop to retain the race lead.

Norris finally pitted on Lap 32, going onto the hard tyres and rejoining in seventh place behind the Alfa Romeo of Kimi Raikkonen, who had yet to stop with the Brit quickly moving into sixth place after easily passing Raikkonen on the run-up to Turn 3.

Russell’s disappointing day came to an end on Lap 39, as Williams elected to retire the Brit’s car as he pitted to become the race’s second retirement.

Carlos Sainz Jr finally pitted on Lap 42 for hard tyres, with the Spaniard got out ahead of compatriot Alonso in eighth, whilst Ricciardo also pitted for hards with the Australian rejoining the circuit in 15th place behind Esteban Ocon.

Sainz quickly made use of his fresh hards to move back into the top six, first passing countrymen Alonso and then Stroll on Lap 45 in what was turning out to be an excellent day for the young Spaniard after starting 12th on the grid.

Leclerc moved back into the points-paying position after the Monegasque went around the outside of former teammate Sebastian Vettel into Turn 3 to move into 10th, as Vettel’s old hard tyres began to fall apart.

With just under twenty laps to go, Verstappen began to struggle with his brake pedal, with the Dutchman told by his engineer Gianpiero Lambiase that the issue was down to braking over the Turn 9-10 kerbs.

Perez pitted for the second time on Lap 55 for a fresh set of medium tyres, with the Mexican well clear of Norris in fourth as Red Bull chased the fastest lap points off Mercedes.

Leclerc continued his charge through the order, with the Monegasque first passing Tsunoda and then Alonso to move up into eighth place in what was turning into a solid comeback drive as he set off after Stroll in seventh.

One lap later, Leclerc got past the Canadian with an easy move into Turn 2 to secure vital points for the Maranello based team.

With one lap to go, Hamilton pitted for a fresh set of tyres in Mercedes' final roll of the dice to try and steal the fastest lap off Perez.

With Hamilton over forty seconds back, Verstappen cruised to victory in Styria ahead of Hamilton who was a distant second but snatched the fastest lap of the race on the final lap with Bottas just holding off Perez for the final place on the podium.

Norris finished a distant fifth ahead of former teammate Sainz and Leclerc, with Stroll salvaging some points for Aston Martin in eighth place.

Alonso was ninth for Alpine, whilst Tsunoda rounded off the points-paying positions in tenth. 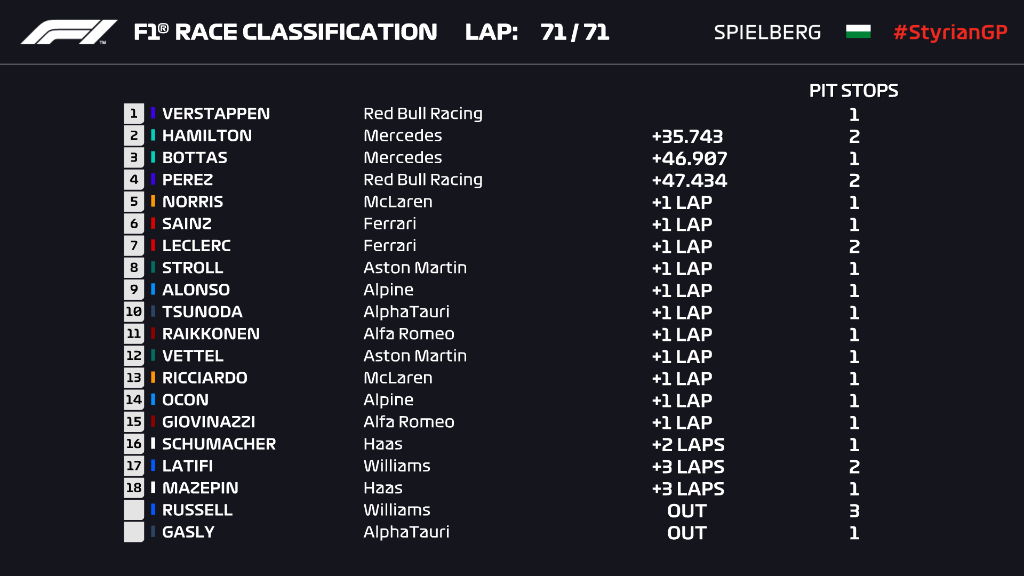