Second qualifying in a row at the Red Bull Ring in Spielberg and pole position for Max Verstappen again. The ninth round of the Championship, confirmed to be a battle between the two drivers that are fighting for the drivers' standings lead: Max Verstappen and Lewis Hamilton.

The Dutchman was the best in the first free practice session on Friday and in FP3 this morning. The English World Champion, who this morning announced his 2 years contract exension with Mercedes, on the other hand, set the best time in FP2, with his W12 that seemed back in the hunt.

Mercedes lead the way in the long run data, they managed to extract good grip from the tyres, which are a step softer this weekend, but Red Bull seemed to have as Hamilton reckoned “something extra in their bag”.

The conditions of the circuit today were not the best, the higher temperatures of the track challenged the set-up and the aerodynamics, but the battle was tight, since Friday with very close lap times.

McLaren and Ferrari behind continue to propose a spectacular battle for third place, that is nothing less than what is being fought in front, even if during today's qualifying both Ferrari and Daniel Ricciardo's McLaren remained out of Q3. Brilliant performance by Lando Norris, who managed to qualify his MCL35 in second place.

Sunny day in Spielberg. Sold out in the stands, life seems back to normal in Austria.
Green light and Mick Schumacher is the first driver to go out with a time of 1:06.127, followed by Max Verstappen's Red Bull that sets the best lap time in 1:04:249.

Raikkonen, Ocon, Latifi, Schumacher and Mazepin are, in this order, out of Q2.

Cars are out again for Q2, medium compound for the two Red Bulls, Perez goes immediately on track and sets a good lap in 1:04.554.
9 'at the end of Q2 of the Austrian GP, most of the cars out at the same time, a lot of traffic in the pit exit. Medium tyres for Sainz, Leclerc, Verstappen, Hamilton and Bottas. Alfa Romeo, Alpha Tauri and Williams out with soft compount on to try to reach the Q1.

Alonso is the first to go out for the second stint, good second time for Gasly with soft tyres. Max Verstappen limes his lap time 1:03.927. Alonso was damaged by Vettel during his last attempt. The German apologized, but he risks a penalty.

Russell sets an amazing lap time with the medium compound and outqualifies both Ferrari.

Sainz, Leclerc, Ricciardo, Alonso and Giovinazzi are, in this order, out of Q3

1:03.958 for Lando Norris, who takes the lead, but he's immediately replaced by Max Verstappen who is faster by 2 tenths. Temporary third position for Hamilton, 4th Bottas and Perez is now 5th.

Amazing performance for Lando Norris, but he's not quick enough to steal the pole from Max Verstappen. Super pole for the Dutch in 1:03.720. 3rd Perez, 4th and 5th the two Merecedes'. 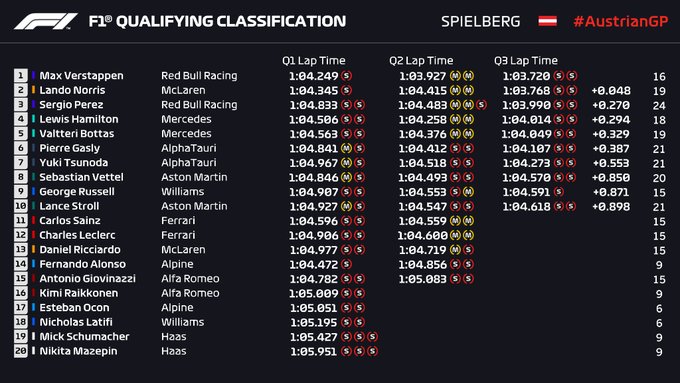 F1 | British GP | Fernando Alonso on a rainy saturday in Silverstone: “I felt it was time to deliver again some risky laps.”